Speaker encourages SGC to push for a smoke-free campus 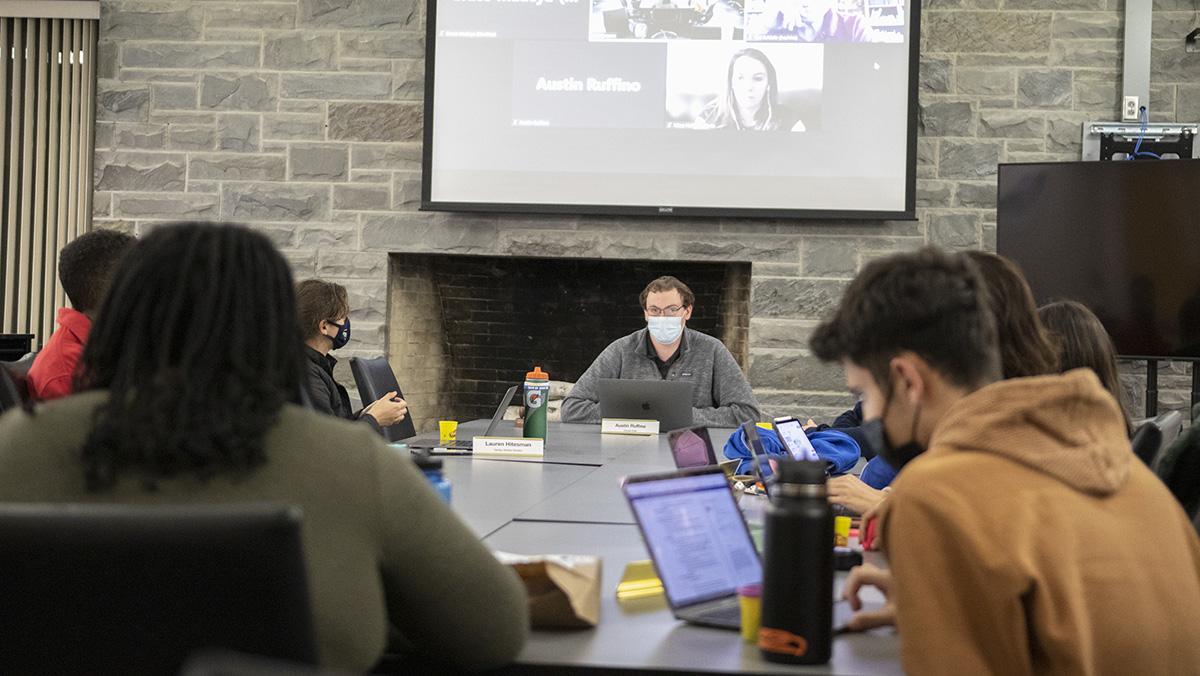 Lauren Leone/The Ithacan
Ted Schiele, coordinator for Tobacco Free Tompkins and planner and evaluator for the Tompkins County Health Department, met with the SGC at its Nov. 1 meeting, to encourage the council to work towards making the college a smoke-free campus.
By Mel Andia — Staff Writer
Published: November 3, 2021

Ted Schiele, coordinator for Tobacco Free Tompkins and planner and evaluator for the Tompkins County Health Department, met with the Ithaca College Student Governance Council (SGC) at its Nov. 1 meeting, to encourage the council to work towards making the college a smoke-free campus.

The manual defines smoking as the use of cigarettes, cigars, pipes, e-cigarettes and personal vaporizers or other devices associated with vaping.

Schiele said he has been working to make the college become a smoke-free campus for more than 10 years. He began by advocating for smoke-free dormitories, which was ignored by the college. The state then passed a law mandating all college dormitories be tobacco-free in 2012, according to a 2014 report by the New York State Tobacco Free Initiative.

A survey conducted by the National Institute on Drug Abuse from 2020 found that only 4% of students reported having smoked a cigarette in the past month. The University of Michigan study found that there was an increase from 6% to 22% of 19 to 22-year-olds in college who vaped nicotine at least once in a 30 day period.

The last survey for Ithaca College students to share their opinions on becoming a smoke-free campus was in 2015. In 2019, Schiele surveyed 2,100 Cornell students, which resulted in a resolution to recommend a two-to-three year process to create a tobacco-free campus.

The senators asked Schiele about his goals for a smoke-free campus.

“I’m wondering what the severity of the consequences would be if a student were to go against the smoke-free campus policy,” Freshman Noah Richardson, Class of 2025 senator, said.

Schiele said he wants there to be trained ambassadors to ask people in no-smoking zones to stop smoking in order to enforce the policies and to have more signs declaring no-smoking areas.

Schiele said that the ideal is for there to be no smoking anywhere on campus, but that creating a campus with designated smoking areas is more realistic.

The college currently has designated smoking areas outside Rothschild Place, Campus Center, the Center for Health Sciences, the Center for Natural Sciences, the Dillingham Center, East and West Towers, the academic quad, the Textor patio, the Park School of Communications, the Terraces Dining Hall, Towers Dining, Parking Lot F meridian, patio on the East Side of the Circles Apartment community building, the center quad area and the patio between Gardens 25 and 29.

Schiele said his ideal areas would be away from campus and academic buildings, on the edge of the lowest parking lot or up at the Towers parking lot.

Junior Austin Ruffino, SGC senate chair, said he is looking for any SGC senators who are interested in co-sponsoring a rewrite of Schiele’s bill with him.

“I think we have a couple ideas that I’ve discussed with some other SGC members … of ways we might be able to gauge current student interest,” Ruffino said. “Maybe [through] something like a survey.”

Schiele said that in 2016, he worked with Tim Connors ’17, a former SGC senator who also worked with Colleges Against Cancer, to create a bill for a smoke-free campus. The bill was not passed by the SGC.

Schiele said he worked on a bill for the college in 2016, then in 2019 he updated that bill for Cornell University, and he said he had a bill from March 2020 that was supposed to be presented, but was delayed due to the COVID-19 pandemic.

“I’ve been on the sidelines of tobacco control over the last 18 months because my job in the health department was consumed by COVID,” said Schiele.

Many New York State campuses are smoke-free, including SUNY Cortland, which became a smoke-free campus in 2013, according to the official SUNY Cortland Tobacco and Nicotine Free Policy. Schiele said he believed Cortland’s decision stemmed from the university’s focus on health.

“Ithaca College has a focus on health too,” Schiele said. “The last time I was up on campus … [it] was a while ago, [and] there were still ashtrays bolted on the side of buildings, right outside the entry ways, which, to me, just doesn’t make sense.”