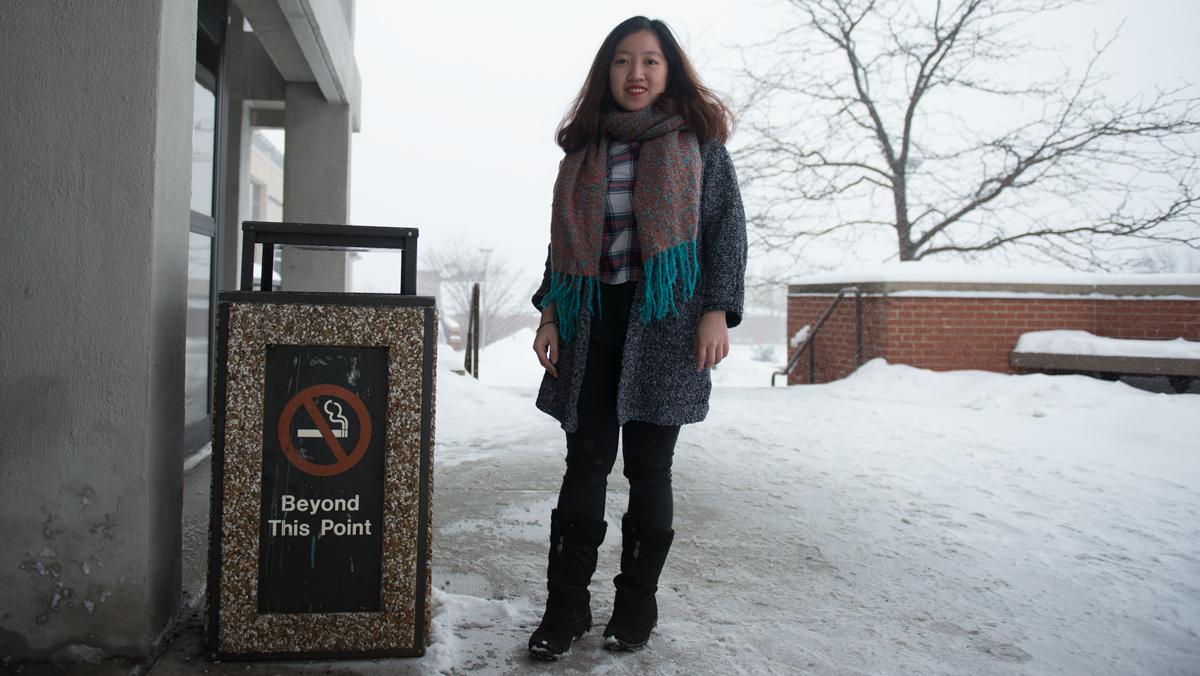 An Ithaca College student is drafting a proposal for a tobacco-free campus policy with the goal of having it enacted it at the college.

The draft, written by senior Tra Nguyen, proposes the creation of a policy to make the campus 100 percent tobacco-free, following the national trend of private institutions banning tobacco. According to the American Nonsmokers’ Rights Foundation, as of Jan. 2, there are at least 2,106 smoke-free campuses in the U.S.

Nguyen said the policy started as a final project for her Front-Page Public Health: Policy and Epidemiology class during Fall 2017, and that she wanted to continue it this semester. Nguyen said that her motivation for the project is to improve the campus in terms of both environmental sustainability and health, which she said she is always conscious of due to her asthma.

“It’s really about the desire to want to breathe clean air in the campus environment,” Nguyen said.

The proposal cites a 2011 study conducted by instructors from Indiana University and Purdue University, in which smoking at Indiana University decreased by 3.7 percent after the implementation of a smoke-free policy. According to the 2017 National College Health Assessment Report, nine percent of students at Ithaca College reported using tobacco cigarettes within the last month.

Nguyen said that one of the options provided in her proposal is to create a Tobacco Advisory & Surveillance Committee, which would work to control smoking after the implementation of a smoke-free policy and would create and promote resources for smokers after the smoke-free legislation is enacted.

Ted Schiele ’99, planner and evaluator at the Tompkins County Health Department and Tobacco Control Program Coordinator, is working with Nguyen on the policy.

Schiele said he has been working to regulate the college’s tobacco and smoking policies for over a decade and has worked with multiple students and faculty at the college in an attempt to implement a policy banning tobacco.

A bill to make the college tobacco-free, the Tobacco Free IC bill, was passed by the Student Governance Council toward the end of the spring 2016 semester. The bill was proposed by Tim Conners ’17, senator for the Class of 2017, and was passed in a 6–2 vote on May 2, 2016.

The bill resolved to form a committee that would write a policy banning tobacco at the college by Jan. 1, 2018. The bill also included a clause stating that the Hammond Health Center should provide counseling to help smokers quit.

Although the bill was passed over a year ago, no such committee has been formed yet, and as of January 2018, the college has yet to become fully tobacco-free.

SGC President, junior Carlie McClinsey, said the bill was not moved to an administrative level because Conners left the SGC, and because many members of the SGC senate were against the bill.

McClinsey said she believes a new smoke-free policy bill would be more successful in getting approved by both the SGC and the administration, as smoking becomes even less socially acceptable and as the administration becomes more accepting of students’ ideas.

Schiele said the year after the bill was passed, he and another group of students spoke with Kari Brossard Stoos, assistant professor in the Department of Health Promotion and Physical Education, who was a member of the Faculty Council at the time, to find out if the Faculty Council would support the bill. Schiele said Brossard advised them that the council dealt more with curriculum than with policies.

“Tim had gotten action in the student governance, but we hadn’t gotten past that,” Schiele said. “We were looking for a connection to the faculty, staff, administration, any way that we could go the next step beyond students.”

The current smoking and tobacco policy on campus is the 2.8 10 Smoking Policy, which was last updated Feb. 12, 2010.The policy bans all smoking in any indoor campus facilities and instructional areas, with the exception of performers in a theatrical program. The policy also provides a list of limited outdoor areas near academic and residential buildings where smoking is permitted.

Mark Ross, environmental safety specialist in the Department of Environmental Health and Safety, said he is torn between the current policy and the more restrictive policy that would come from the proposal. The current policy, which provides designated areas where people can smoke, works well with the campus, he said.

“They give people where they can smoke legally and kind of given them an idea, depending on where they work in campus, where that area is,” Ross said. “They kind of gave each building, so I think that’s where it’s beneficial to campus.”

Ross said he has heard both sides of the smoking debate but believes that smokers should have the right to smoke on campus if they are not affecting others.

“I’m 53, and I went through all the anti-smoking conversations when I went through school, and I thought by this age smoking would be long gone,” Ross said. “But there are still quite of few people that smoke. There’s a lot of students that smoke.”

On May 2, 2017, the Tompkins County Legislature voted to raise the minimum legal age for purchasing tobacco from 18 to 21, which has been effective as of July 1, 2017.

Srijana Bajracharya, professor in the Department of Health Promotion and Physical Education, is helping Nguyen by having students from one of her classes, Development and Evaluation of Health Programs, conduct a survey to gather the campus community’s opinions regarding tobacco and a tobacco-free campus.

Junior Arsalan Sajid, a smoker, said he thinks a partially smoke-free campus would be a good idea, but that there should still be designated areas where people can smoke, despite the slight inconveniences it may cause smokers. Sajid said he has recognized the differences in the culture surrounding smoking on campus versus those in Pakistan, his home country.

Cornell University is also making strides toward a tobacco-free campus. According to the Cornell Sun, in early March students will have the opportunity to vote whether or not all tobacco products will be banned from campus.

Up in the air: Students consider smoke-free policy on campus