Student forms club to support those with food allergies 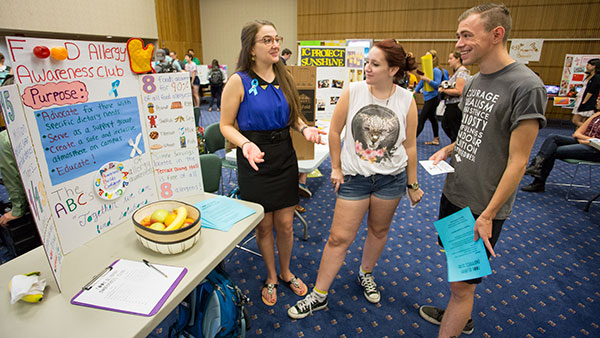 Sophomore Mackenzie Gannon has lived her whole life with a life-threatening allergy to dairy and eggs.

If Gannon touches dairy or eggs, or even just dairy or egg residue, she will break out into hives. Ingesting dairy or eggs will make her go into anaphylactic shock, which is lethal unless she administers an epinephrine shot, or EpiPen, and spends the night in a hospital. There is no cure for food allergies other than avoiding allergenic foods.

Now, Gannon said she is starting the Food Allergy Awareness Club to represent students with food allergies when talking with administration and act as a support group for students with allergies. She also said she wants to educate students who don’t have allergies about how to promote food safety.

“I’d like to find other kids who are in the same boat as me,” Gannon said. “Not only will it be a place to vent, but also it will be a place to look for solutions.”

Gannon said she plans to establish a connection with and organize fundraisers for Food Allergy Research & Education, a national non-profit organization that invests in food allergy research.

Gannon said the organization has a precedent of working with colleges to promote food allergy awareness and encourage having EpiPens in every school.

One student who expressed interest in the club is sophomore Emily Hsu. Hsu has eczema, a congenital chronic condition that causes skin inflammation or asthma when exposed to allergens. She said she has a fairly mild case of eczema, but most people would overreact when she told them about her disease, which she said can be embarrassing.

“Last year, one of my professors gave us a granola bar … and I looked at the ingredients, and I saw it had peanuts,” Hsu said. “I turned to the person next to me and I offered it and I said I was allergic to peanuts, so she quickly covered it, thinking I would breathe it and die.”

Gannon said she’d rather have people overreact than be careless, especially when preventing cross-contamination. She said she had a reaction at the vegan station at Campus Center Dining Hall during finals week, and had to take a final exam while ill.

“It was pretty scary because … I had never had a reaction on campus yet,” Gannon said. “When I would have reactions at home, I was with my parents and I knew that they were watching over me, but when you’re at school, you are your only advocate.”

“For students, it’s going to be an ongoing process of recruiting students who are comfortable knowing there’s a high degree of risk of serving customers [with allergies],” Scott said.

Scott also said his office is in communication with the Food Advisory Committee, a subcommittee of the Student Government Association.

“It’s a great forum to have some connection with student government and to always feel like we have a little bit of the pulse of the students weighing in on program decisions,” Scott said.

Gannon said while training should be obligatory for student cooks, the rest of the student body should be educated with events and meetings, not mandatory classes.

“If you are forced to do something, instantly your open-mindedness shuts down and you’re not going to listen,” Gannon said. “I want people to want to learn.”

Simple Servings, a food station in Terrace Dining Hall, eliminates the eight most common allergens from its meal preparation. Sodexo’s method of deciding which allergens to remove draws from national studies on what food allergies are the most common, Scott said.

“More recently, there’s been an increase of the number of folks with specific food allergies,” Scott said. “What we’ve done in the past is really try to assist on a case-by-case basis, and for a number of years that was OK. Now, we have a greater volume that it allows us to craft some specific programs targeted to meet certain dietary needs.”

Gannon said even diseases that are not life-threatening can have prolonged effects, and the Food Allergy Awareness Club can help people understand how to live with and interact with people with food allergies.