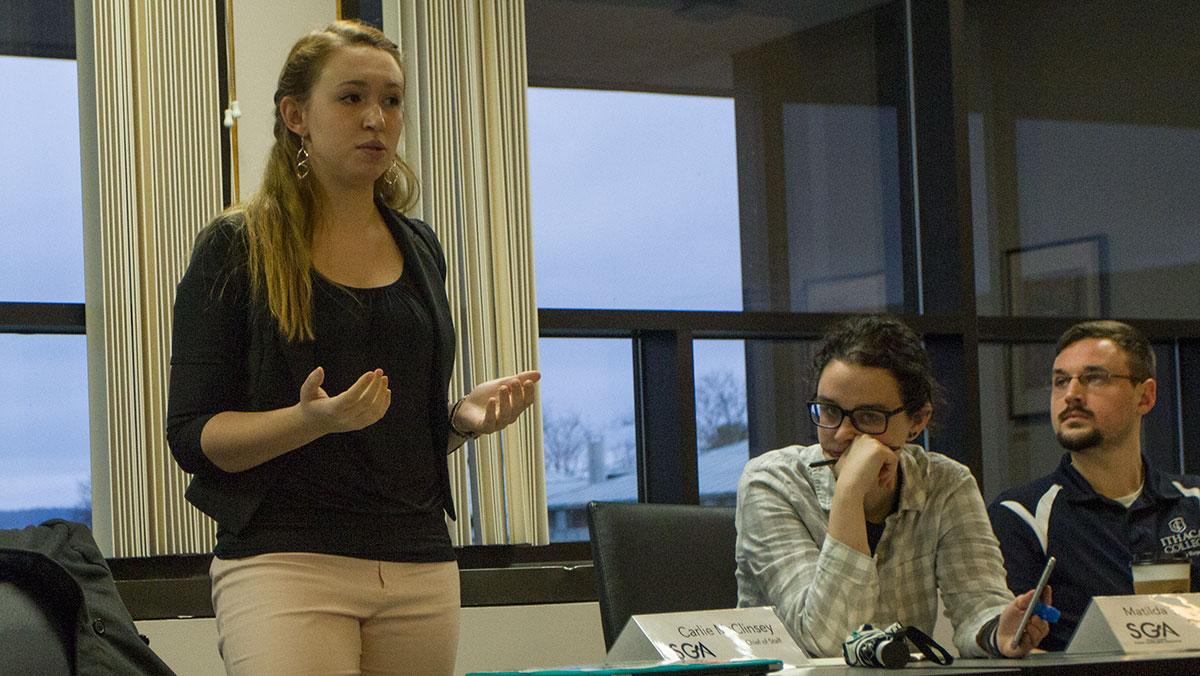 Justin Henry/The ithacan
Freshman Carlie McClinsey was voted in as 2016–17 senate chair of the Student Government Association at the May 2 meeting.
By Justin Henry — Staff Writer
Published: May 4, 2016

Freshman Carlie McClinsey was voted in as 2016–17 senate chair of the Student Government Association at the May 2 meeting, running against two other candidates on a platform for strengthening the senate and stabilizing the constitution.

Having previously acted as SGA chief of staff, McClinsey was voted in by the recently elected 2016–17 senate by a seven to one vote. The position of senate chair was previously occupied by SGA president-elect Marieme Foote.

The SGA senate chair is responsible for overseeing weekly SGA meetings, operating as a communicator between the senate and executive board and co-chairing the Organizational Review Committee — a committee responsible for revising the SGA constitution every other year. The committee will meet again at the end of the 2017 spring semester. McClinsey ran against junior Cat Proulx and sophomore Matt Blezow.

“I think a lot of the inactivity in the senate has to do with people not feeling like they have much power or not knowing how to use that power,” McClinsey said.

McClinsey said she would foster a closer working relationship between the senate and the executive board by requiring all senators to join the SGA Slack team, currently limited to the use of only the executive board. Slack is a messaging software that, she said, would strengthen internal communications of the SGA senate.

As a member of the Organizational Review Committee, she said she would solicit feedback on the constitution from SGA members through a digital copy. Members would be able to critique the constitution so the committee could consider their concerns when revising it.

Foote said she had full confidence in McClinsey’s ability to perform effectively as SGA senate chair. She said that as chief of staff, McClinsey worked closely enough with the executive board in the past year to be able to work well with its members while still being able to communicate freely with the senate.

“I think she understands the position really well, and she’ll be able to bring her own perspective to what she’s doing,” Foote said. “I think she’s detached enough from the e-board to not really be completely an e-board member but still be a good liaison for senate members.”