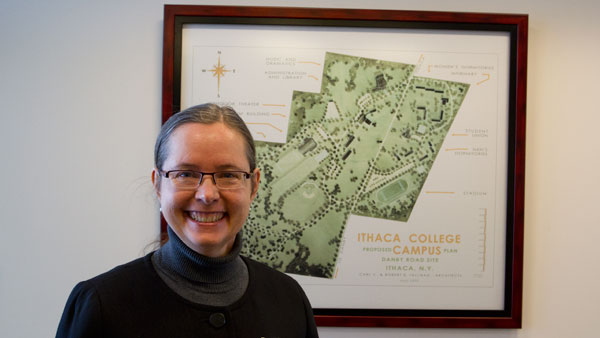 Some colleges and universities are beginning to drastically limit their policies of accepting Advanced Placement credits for traditional college credits. In keeping with that trend, Ithaca College does not accept AP credits for the Themes and Perspectives or Integrative Core Curriculum Capstone components of the ICC, which was implemented for the 2013–14 academic year.

The college’s AP policy, as stated on its website, says incoming high school graduates may apply AP credits to fulfill the following Integrative Core Curriculum components: First Year Composition, Quantitative Literacy, Diversity and Writing Intensive. According to the 2013–14 Undergraduate Catalog, the AP credits may also apply to the 12 Complementary Liberal Arts credits depending on school and department requirements.

Carly Lindauer, senior director of external communications for College Board, said research shows students who succeed on AP exams in high school are more likely to succeed in college, and College Board is committed to ensuring that high school students with the potential to succeed in AP courses have access to them. Lindauer also said College Board surveyed almost 2,600 colleges in 2013 and 99 percent reported granting credit for at least one AP exam.

Carol Henderson, associate provost for accreditation, assessment and curriculum, said the college provides its baseline policy regarding AP credits, but each school or department has the ability to tailor the policy to how it sees fit.

Henderson also said she sees more students taking AP courses in high school, and it’s good for students to get a head start with their college requirements. Though the college limits AP credits accepted within its policy, there is still room for transferrable AP credits in comparison to other colleges.

“We want to reward that behavior, that’s very good behavior,” she said. “I mean, you want to start studying as soon as you’re ready to study at a college level, and if you do bring credits with you, we want to work with you here at Ithaca about that.”

Freshman Chrissy Smith said she took three AP courses in high school, including U.S. History, French and English. Smith said taking APs in high school allowed her to bring transfer credits to help lighten her work load because she now has fewer classes to worry about.

“If I was going to take academic writing, I would have one extra big class this semester, and it might get in the way of other stuff — not necessarily my major, but like my themes and perspectives classes,” Smith said. “It’s like an extra thing to worry about.”

The college is among 1–3 percent of institutions that has modified its AP policy, but the only changes that have been made recently were because of the new ICC program. Henderson said she doesn’t see AP credits going away in the future, but instead the credits may become less useful for students.

“You could still bring them in, you would still get that AP exam score, we would still accept that as part of your record, but you wouldn’t necessarily find it useful to apply toward your degree as your curriculum becomes more like what we really want it to be,” Henderson said.

However, Dartmouth College, located in Hanover, N.H., has taken a more drastic approach with its AP policy.

The college’s website states it will no longer grant course credit for AP examinations come Fall 2014. However, an article posted on Dartmouth Now, a news website published by the Dartmouth Office of Public Affairs, clarified the college’s decision that the college will still use the AP exam scores to evaluate incoming student applications.

Within the article is a statement released by Michael Mastanduno, dean of faculty of arts and sciences, that said this policy has been changed, so students can take full advantage of the faculty’s experience and expertise, instead of bypassing classes with their AP credits.

While Henderson said she sees the college moving more toward having an integrative multidisciplinary curriculum, AP credits are here to stay. She said while AP courses are boxed-in individual courses separating each subject, the ICC is a program that will link these subjects — through Themes and Perspectives courses — in a way that will help students understand their coursework more easily using the foundation of information they obtain from AP courses.