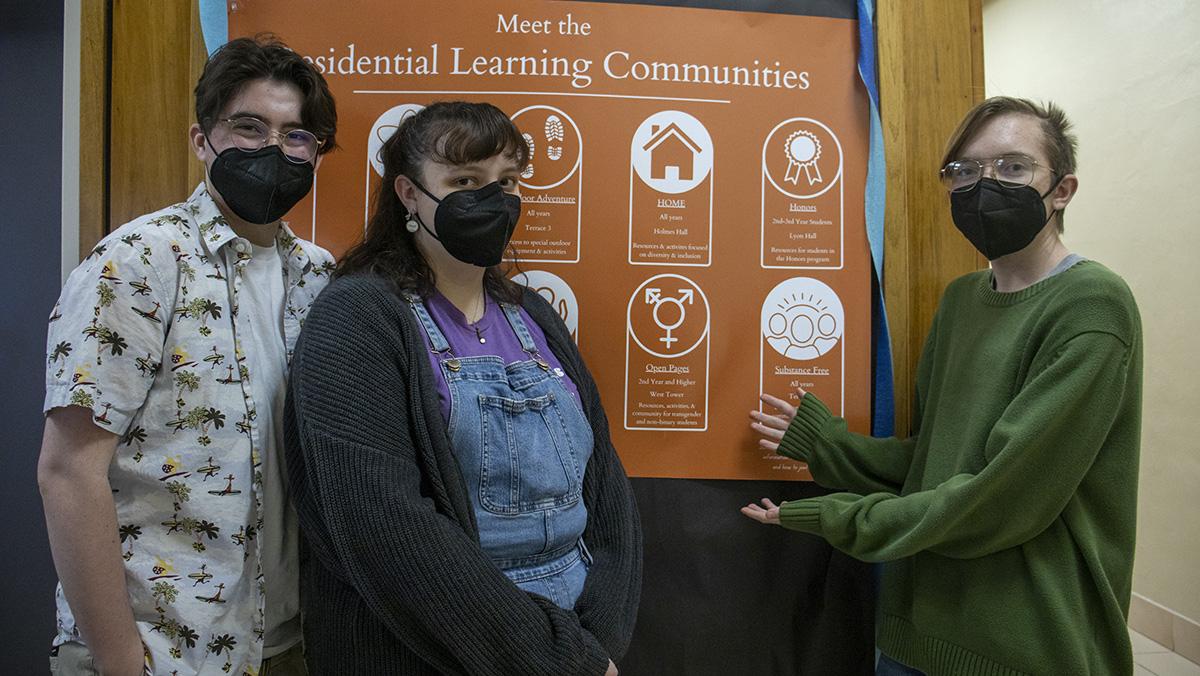 Transgender and nonbinary students have been offered a chance to come together and build community in the new Open Pages Residential Learning Community (RLC) starting in Fall 2022.

When applying for housing placements for Fall 2022, Ithaca College students going into their sophomore year and above had the opportunity to request placement in the new Open Pages Residential Learning Community. Open Pages will be located in West Tower in close proximity to the Center for LGBT Education, Outreach & Services, located in the Towers Concourse. Luca Maurer, director of the LGBT Center, said Open Pages, created by sophomores Jay Barrett, Gwyneth Cole and Cecil Decker, is the first RLC created specifically for non-cisgender–identifying students.

“I’m so excited about this, not just as the LGBT Center director, but remembering myself as a person in college who would have really benefited from this kind of an RLC but nothing like that existed,” Maurer said. “I don’t think my peers and I would have been able to even imagine something like this.”

Maurer said the idea and the majority of the work that went into the creation of the RLC came from the student team.

“This was a student-led, student-driven initiative, and frankly, from where I sit, I think that’s the best kind of initiative to take place on our campus,” Maurer said.

Barrett said West Tower was chosen largely for its entirely gender-neutral restrooms and elevator accessibility for disabled students interested in the RLC. Open Pages will be the only RLC in the residence hall. Some double rooms on the RLC floor will also be used to house only one student to accommodate the needs of residents. West Tower is not typically a housing option for freshmen, and Barrett said the Office of Residential Life recommended sophomores and above be able to join the RLC for this reason. However, Barrett said that  in the future, the students hope to open the RLC to freshmen.

Barrett said the name Open Pages is twofold; it references a metaphor to writing one’s own story, while also being discreet for students who may not be comfortable with family members knowing their gender identities.

Decker said at its most basic level, the RLC is a community that will make it easier for transgender and nonbinary students to function on the college campus.

“[Being non-cisgender] can impact so many simple things, like how comfortable you are leaving your dorm and what you decide to wear to go out and get water, if it needs to be a big deal or not, how you handle showering in general, which is such an important thing,” Decker said. “It can become so fraught if you feel like you’re in a situation where [living] isn’t necessarily safe or at least is not comfortable.”

The students agreed that the core of the issue is that colleges are not typically built for transgender and nonbinary students and are no longer adequate for many college students.

According to a 2021 report by the Williams Institute at the University of California, Los Angeles, 1.2 million LGBTQ+ people in the U.S. identify as nonbinary, and 76% of nonbinary adults are between 18 and 29. According to a 2016 report by the organization, 1.4 million adults in the U.S. identify as transgender and of the population surveyed, adults between 18 and 24 were the most likely age group to identify as transgender.

Barrett said the idea also came from issues with the preexisting transgender housing accomodation process, which allows students to contact housing or complete a form requesting housing preferences they are most comfortable with, including dorm and type of room or floor. In Spring 2021, the housing application process switched to a new platform and the transgender accommodation became a preference rather than a requirement.

“Even though the transgender housing accommodation process still exists and housing is going to keep a better eye on it, we still wanted to make sure there was a definite space for transgender students on campus that they feel like they have to go to,” Barrett said.

Cole said events for the RLC are being planned in collaboration with Fall 2022 community applicants.

“A lot of [transgender holidays and awareness days] come with a lot of sadness and a lot of darker history, so we also want to do things just like fun movie nights,” Cole said. “It’s not all sad and somber. Sometimes it’s just we’re [going to be] making popcorn and having a good time.”

Cole said the students hosted a meet and greet for Fall 2022 residents and said they were enthusiastic about the turn out and community building between new and old friends.

“The dream for this floor is we’re going to be hanging out nightly regardless of events,” Barrett said. “[It is] actually forming a tight-knit community that isn’t only coming together once a month to watch a bad movie but actually with each other and supporting each other.”