Students deliver petition to administrators in support of faculty 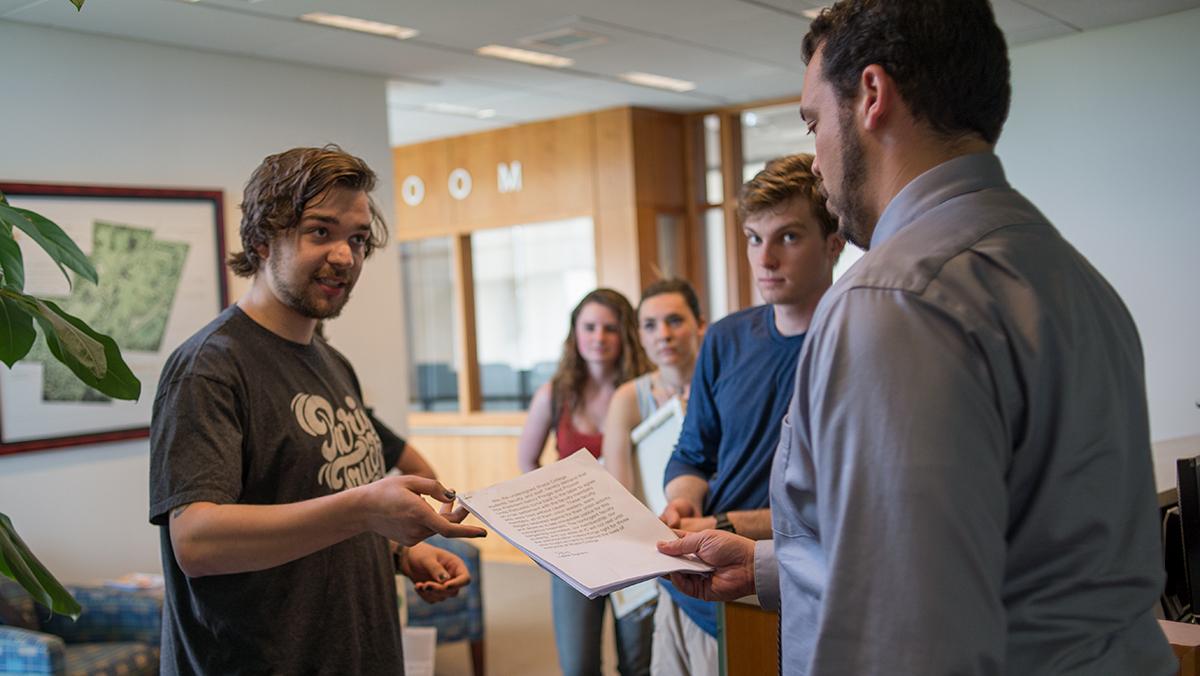 Fernando Ferraz/The Ithacan
Students from IC Students for Labor Action delivered a petition to administrators at Ithaca College in support of three contingent faculty members involved in labor negotiations who were not rehired for the fall.
By Sophia Adamucci — Assistant News Editor
Published: April 27, 2017

Members of IC Students for Labor Action delivered a petition April 27 to Ithaca College’s administration calling for the rehiring of the three faculty members who served on the faculty union’s bargaining committee.

The petition, signed by 670 students, faculty, parents of students, alumni and staff, states that it demands Nancy Pringle, senior vice president and general counsel, and Linda Petrosino, provost and vice president of educational affairs, agree to a “fair settlement with the faculty members who were fired without cause.” The faculty members who were not rehired for the Fall 2017 include David Kornreich and Shoshe Cole, assistant professors in the Department of Physics and Astronomy, and Rachel Gunderson, instructor in the Department of Health Promotion and Physical Education — all previous members of the full time–contingent faculty bargaining committee. They claimed that they were not rehired due to their involvement in the union and have filed an unfair labor practice lawsuit against the college.

Senior Taylor Ford, president of IC Students for Labor Action, said the petition has been in circulation for about a month. He said the petition is an accessible way for people, especially alumni who are not on campus anymore, to get their voices heard about this issue.

The petition was delivered by Ford to Philip Garin, assistant counsel for the Division of Human and Legal Resources.

Senior Peter Zibinski, vice president of IC Students for Labor Action, said he thinks the reason the faculty members were not rehired is that the administration is retaliating against the faculty forming a union. Zibinski said the group will take more disobedient action in the future if the administration does not remedy the situation.

“In the past, the administration has shown that petition delivers, and logic and dialogue have not been effective in causing them to act,” he said. “In the past, we’ve had to resort to rallies, protests, handing things out to prospective students. We’ll continue to do that if this issue is not remedied.”

Dave Maley, senior associate director for media and community relations, said the college bargained in good faith and did not discriminate against any employees. Maley said the college will cooperate in any way with the unfair labor practice lawsuit filed against the college for not rehiring any of the members of the full time–contingent faculty bargaining committee into their full-time positions.

“Students are obviously welcome, as they have been throughout this and throughout the years and decades to lend their voices to issues and causes that are important to them,” Maley said. “This particular issue has the aspect of legal claims being made, so of course, the college will continue to follow the legal process as it unfolds.”