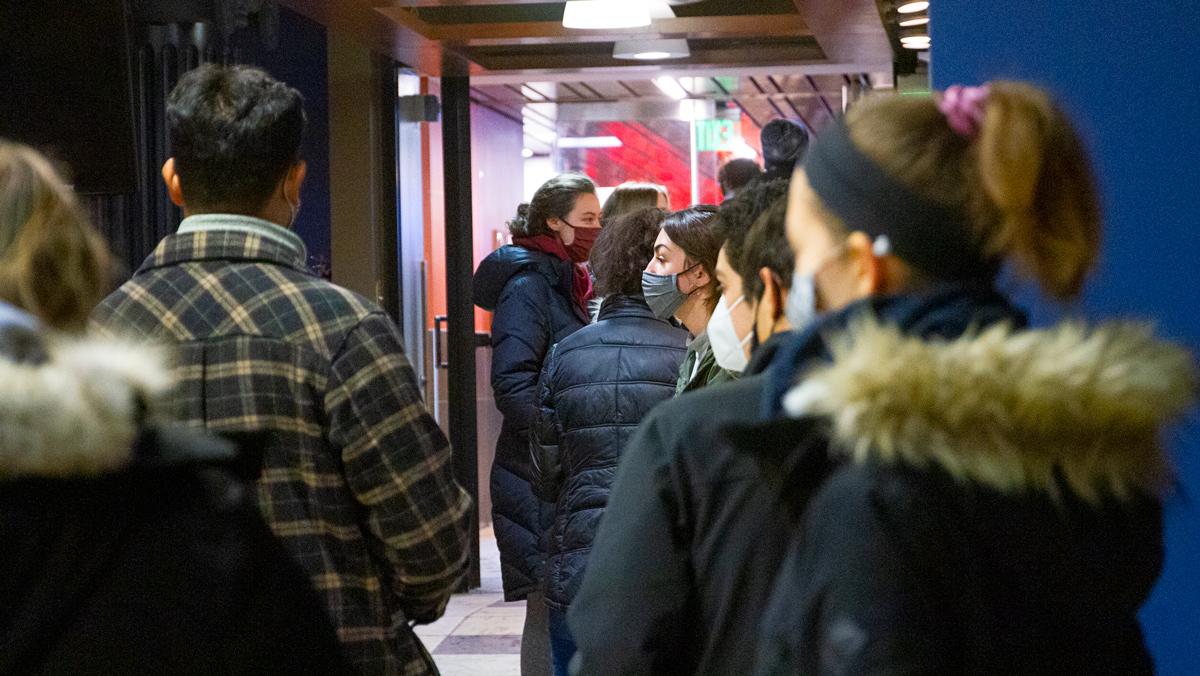 Ithaca College dining hall lines have caused some concern among students trying to get their meals.

Freshman Nadia Narkiewicz moved in Feb. 5 and said she is already feeling some anxiety due to the long dining hall lines. She said she also was not surprised to see the minimal social distancing.

“It was disappointing, but it was expected,” she said. “We’ve been hearing about colleges just around the U.S. not really doing everything that they said they were going to in terms of keeping the faculty and the student body safe.”

She said her expectations for the college were not high, but she was still disappointed to see no one enforcing social distancing among students while waiting in line.

“I saw a lot of people with masks below their noses,” Narkiewicz said. “It generally felt like a very unsafe environment.”

The college distributed masks to students during move-in, and students raised concerns regarding the quality of them. Multiple students posted videos in the Overheard at IC Facebook group testing out the masks with a lighter. People should not be able to blow out a lighter or a candle with a mask because it means too many air particles can pass through.

In an email Feb. 10 to students, Christina Moylan, director for public health emergency preparedness, said students who have the white Ithaca College masks should no longer wear them as they do not meet safety standards.

Moylan also said that if students wish to double mask, they should wear a surgical mask as their first layer and a cloth mask as the second layer. She said three-layer disposable masks will be available at the Campus Center information desk, the Office of Residential Life in East Tower, Terrace 13 and each dean’s office.

Seating in IC Square has been reduced, line queues are controlled by rope barriers and there are six feet stickers placed on the ground in the dining halls, Scott McWilliams, director of Dining Services, said.

Freshman Camille Brock also said the length of the lines concerned her. However, McWilliams said there have been no reported long lines on the weekends except for dinner at Terrace Dining Hall on Jan. 31.

An Intercom announcement Feb. 9 recommended that students try to go to the dining halls during non-peak hours if it can fit into their schedules. The announcement also reminded students to stand six feet apart and not in groups.

Sophomore Sara Ostermeier said via email that she posted a complaint in the Overheard at IC Facebook group in response to the lines at Campus Center at approximately 6:30 p.m. Feb. 6.

“The line was out the dining hall door, … but inside, no one was social distancing,” she said via email. “Absolutely no one. People were standing in the lines they had set up, but everyone was clumped together.”

She said she saw groups of people standing next to each other in line and the six feet apart stickers on the ground had been peeled off and moved around.

“It was appalling,” Ostermeier said. “When I was there, none of the workers said anything or tried anything to get people to separate, and it felt extremely unsafe.”

At the All-College Gathering on Feb. 9, a student asked if dining staff would be more vigilant in the future and tell students to stand six feet apart while in line.

Ostermeier said she thinks there needs to be a stronger message from the college that these guidelines are in place to keep the campus community safe. She said that while there are dining hall employees swiping students in, she has not seen them enforcing social distancing. Students can submit a possible Community Agreement violation through the Community Agreement Reporting Form.

“I did have high expectations for the students,” she said. “I really thought that I would at least see people trying. I figured people would break rules partying, but I didn’t think that it would be in public spaces where the rules are clear and other people can see what you do.”

The long lines and early closing of the dining halls and retail dining options have also forced students to order food from off-campus locations or spend Bomber Bucks at retail dining options on campus rather than use a meal swipe in the dining hall. Both Brock and Narkiewicz said that while off-campus food is good, it is already proving to be expensive.

“It’s definitely stressful because we have to watch our spending,” Brock said.

Campus Center Dining Hall closes the earliest at 7 p.m., meaning students have to go to either Terrace Dining Hall or Towers Marketplace, where students can use a meal swipe to purchase food, to get food later in the evening. McWilliams said there are currently no plans to keep CC open later. Ostermeier said that on weekends, she orders dinner from retail options rather than going to either of the dining halls due to the lines.

“In the long run I am concerned that there might be an outbreak at a dining hall or the lines get worse somehow,” she said.

Dominick Recckio, communications director for Tompkins County, said the Tompkins County Health Department (TCHD) could not comment on the lines because it is a specific issue. He said more information on social distancing and de-densifying spaces can be found on the TCHD website.