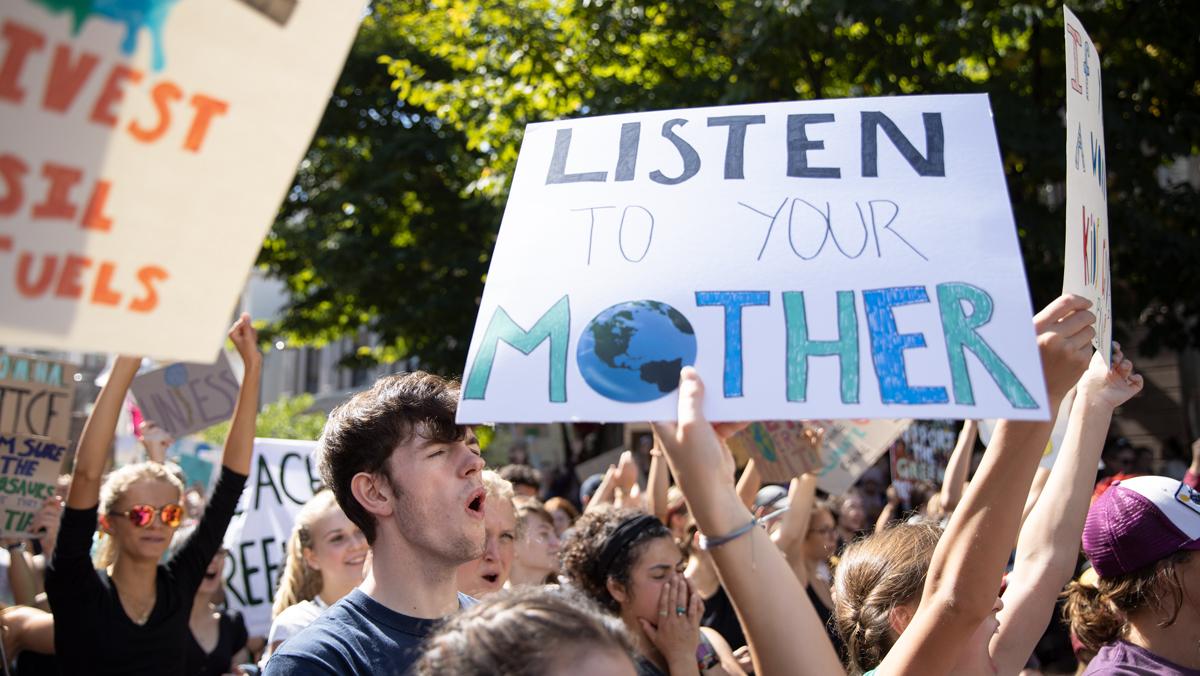 Reed Freeman/The Ithacan
The Global Climate Strike occurred internationally Sept. 20. Ithaca was one of approximately 1,500 locations in 150 countries that participated in the strike.
By Falyn Stempler — Senior Writer
Published: September 22, 2019

Freshman Petar Odazhiev was one of hundreds of Ithaca College students who did not attend their classes Sept. 20. The low class turnout was not because of a rowdy night before but rather because of Ithaca’s chapter of the Global Climate Strike that took place Friday afternoon.

“I am here today because I give a s— about our future,” Odazhiev said to the crowd of students, faculty and staff gathered on the Academic Quad before making their march downtown to The Commons.

“F— class,” he said. “It doesn’t matter right now because this is what f—— matters.”

Ithaca was one of approximately 1,500 locations in 150 countries that participated in the strike, according to the Global Climate Strike website. The strike — inspired by Greta Thunberg, a 16-year-old Swedish climate activist — took place three days before leaders meet at a UN Climate Action Summit in New York on Sept. 23 to address the climate crisis. There are only 11 years left to stop irreversible damage caused by climate change, according to the United Nations.

The Ithaca College Eco-Reps led hundreds of students, faculty and staff downtown to meet up with the larger event on The Commons, which was organized by the college’s branch of the Sunrise Movement. The Sunrise Movement is a national youth-led movement addressing the climate crisis. Students, faculty and staff from local elementary, middle and high schools and community members took part in the strike on The Commons alongside students from the college. Ithaca food, agriculture and environmental activists and union organizers were also represented at the downtown event.

The Eco-Reps led the Ithaca College group from the campus to the larger event downtown while shouting group chants, “Gay, straight, black, white, same struggle, same fight,” “We are water, water is life,” “We can’t drink oil, keep it in the soil,” “Hey hey, ho ho, fossil fuels have got to go,” “Here is the tea, we have no planet B” and “When our planet is under attack, what do we do? Stand up, fight back!”

Sophomore Lauren Miller, a member of Ithaca College Eco-Reps, led the gathering of approximately 100 students, faculty and staff on the Academic Quad. She said the strike is an intentional effort to get those in positions of power to pay attention to the severity of the climate crisis.

“We strike today to disrupt the business and school environments,” she said. “To draw attention to the severity of this climate emergency. We strike today to force politicians and corporations and leaders to shift the narrative, to change the economy, to preserve our planet. … We are too loud to ignore.”

Both of the events on campus and downtown began by acknowledging that the town of Ithaca, along with vast parts of New York state, rests on the indigenous lands of the Haudenosaunee, Cayuga, Seneca and Onondaga tribes. Joe Soto and his daughter Maya Soto, local Ithaca community members of Taino descent, spoke at the event. Both discussed indigenous issues and shared cultural chants during the event.

Soto and other speakers said indigenous people are among the first groups to feel the immediate effects of climate change. Additionally, people of color, people living in poverty, people with disabilities, queer and transgender people and elderly people are those most likely to be the most impacted by climate change, as seen in recent events that garnered national attention, including the Keystone Pipeline protests and the Flint lead water crisis.

Other speakers at the downtown event included senior Julia Keene, who shared a poem about her anxiety regarding the climate crisis; Luca Maurer, director of the Center for LGBT Education, Outreach and Services, who discussed the intersectionality of climate issues and marginalized communities; Miller, who spoke about women in politics; Mike Amadeo, a union leader for Greenstar, who discussed the company’s struggle to fight corporatization; and local community members Russell Rickford, associate professor in the Department of History at Cornell University, and Rafa Aponte, who both discussed the intersection of racial and climate justice.

Freshman Soumyaa Joshi said she thought it was important to attend the event. Because her Friday classes were not canceled, she emailed her professor that she would not be in attendance.

“It was pretty inspiring to just listen to all the different people not just talk about climate change but the rights of indigenous people and people of color,” she said.

Freshman Adam Coe said everyone at the college should have attended the event to demonstrate how much they care about addressing these issues.

“I don’t see why the whole campus was not here because it affects everyone,” he said. “There’s always more that can be done. I think Ithaca does an amazing job, but it really comes down to the students as well. We are the ones who are consumers, and Americans are the largest consumers in the world.”

Michael Smith, professor in the Department of History, helped organize the event and distributed flyers with statistics about the climate crisis on the Academic Quad. The handout stated, “Since 1750, the U.S. has produced by far the most C02 of any country in the world — 397 gigatons, the equivalent of almost 2 billion Statues of Liberty,” and “2019 is shaping up to be the hottest year ever recorded, joining the previous 4 years in the top 5.”

He said he thinks the college needs to better prioritize the climate crisis in the strategic plan. One of the objectives of the college’s goal to develop cross-sector partnerships to address challenging issues is to “Create an environmental sustainability mindset that recognizes the impact of climate change,” according to the strategic plan.

“I think any institution that plans for the future without consideration of the impact of the climate crisis is delusional, frankly,” Smith said.

President Shirley M. Collado shared her support and solidarity Sept. 17 for the campus community members taking part in the strike. She said in the statement that her schedule would not allow her to participate in the strike.

“I am inspired by those within this campus community who bring their passion and collective energy to address the urgency of this complex global problem, and I am deeply inspired by our students, in particular, who are fighting for their futures and our shared humanity,” Collado said in the statement.

The statement also addressed that vulnerable communities, including people of color and those of lower socioeconomic status, are the most susceptible to climate change. Collado also said in the statement that she is proud of the sustainable practices of the college, including the facilities master plan.

Smith said he thinks it is important for everyone to engage in dialogue about the climate crisis.

“Just start talking about it,” he said. “Don’t keep those anxieties inside because conversations then lead to action, and I think the more of us are having these conversations, the more likely we are to get changes at IC and changes in New York state and the federal level.”