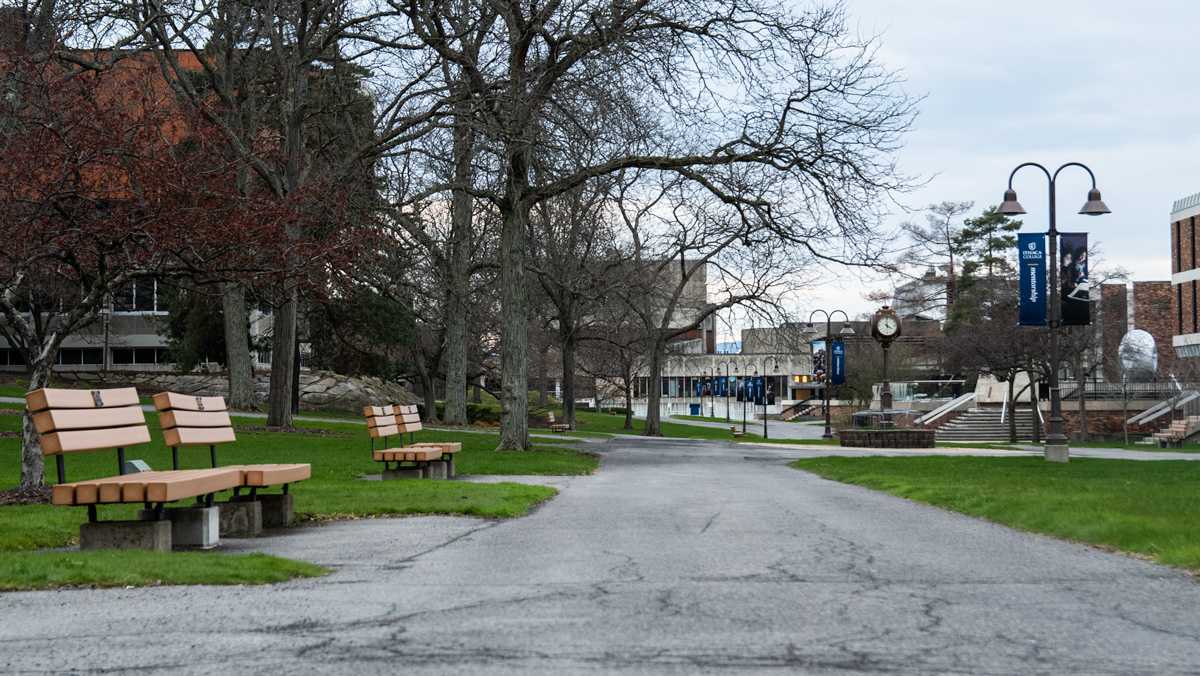 File Photo/The Ithacan
Ithaca College is prohibiting students from several states from returning to Ithaca to move out their belongings in accordance with a new state mandate.
By Ashley Stalnecker — Senior Writer
Published: July 10, 2020

Ithaca College is prohibiting students from several states from returning to Ithaca to move out their belongings in accordance with a new state mandate.

La Jerne Cornish, provost and senior vice president for academic affairs, announced in a collegewide email June 25 that students from states with a significant spread of COVID-19 would no longer be able to return to campus to move out their belongings. Residents of Alabama, Arkansas, Arizona, California, Delaware, Florida, Georgia, Iowa, Idaho, Kansas, Louisiana, Mississippi, North Carolina, Nevada, Oklahoma, South Carolina, Tennessee, Texas and Utah are required by the state of New York to self-quarantine for 14 days upon arrival. Students from those states will be unable to return to move out and will be contacted about shipping or storing their belongings instead, according to the email. Dave Maley, director of public relations, said via email that there is an exception for students who wish to come to Ithaca and self–quarantine for 14 days prior to moving out their belongings.

After the college transitioned to remote learning March 17, which was during spring break, students were unable to retrieve their belongings from their residence halls and on-campus apartments.

The New York state website is maintaining an updated list of the states impacted by these new travel restrictions, effective June 25. The restrictions do not apply to those who have passed through an impacted state, remaining for no more than 24 hours.

The college is allowing students to have a friend, family member or storage company pack and store belongings. The college will also have employees pack a student’s belongings and store them for free or ship them to the student. Maley said students who live in the restricted states and now must cancel their move-in plans will have the total shipping cost waived.

Rising senior Abigail Hartwig, a Florida resident, said she had to cancel her flight to Ithaca, a trip that was originally planned for early July, and will now have to rely on a friend to pack up her Garden Apartment. Hartwig said she will not receive a refund for her flight ticket.

“It’s definitely not ideal,” Hartwig said. “I don’t even know when I’m going to be going back up in the fall.”

Hartwig said she is disappointed that she will not be able to return to Ithaca for her original move–out time slot. She also said she is not satisfied with the college’s communication about the move–out process for students.

“I think they are not doing a good job,” Hartwig said. “They have not communicated with us at all, and this phased move–out approach makes no sense to me.”

The college held two information sessions to provide details about move–out May 7 and June 4.

Rising sophomore Camryn O’Leary, a Texas resident, said the disruption in her move–out plans is inconvenient, but she said she feels she has been lucky otherwise.

“I feel like I can live with not being able to get my stuff,” O’Leary said. “I feel like I’ve been pretty fortunate throughout the whole situation surrounding the virus and all the guidelines in school and stuff, so I think I can’t complain.”

O’Leary said that although she wishes she had received information about the move–out process sooner, she appreciated the efficiency of the plan the college came up with.

“It was frustrating because you want to know as much information as you can, but I understand that they’re making decisions as we go,” O’Leary said. “It’s frustrating that we didn’t hear any useful information from them for a really long time, but, once they did come out with information, it was pretty like, ‘OK, this is what we’re going to do,’ type of thing.”

The college will conduct a Zoom call with each student that opted to have the college pack up their belongings to identify any items that need to be shipped and separate items between roommates.

“I feel a little weird about strangers basically being in all my stuff,” O’Leary said. “The situation is just not ideal, and I’m like, at the end of the day, I’ll take it since they’re storing it for free.”

Orian Fitlovich ’20 said she had already booked her flight from California to Ithaca and was expecting to stay for a week to get closure as a graduate. Once Gov. Andrew Cuomo announced that the travel restrictions would extend to California, she canceled her flight and hotel reservations.

“It’s definitely frustrating,” Fitlovich said. “But I would say honestly it’s not more frustrating than anything we’ve already had to go through with this outbreak. So I’m just trying to keep a positive mindset and know that eventually I will get my stuff.”

Cornish said at the July 7 Faculty Council meeting that if the travel restrictions continue into the designated move–in period for the college, students will be asked to quarantine for 14 days in their place of residence before returning to Ithaca.