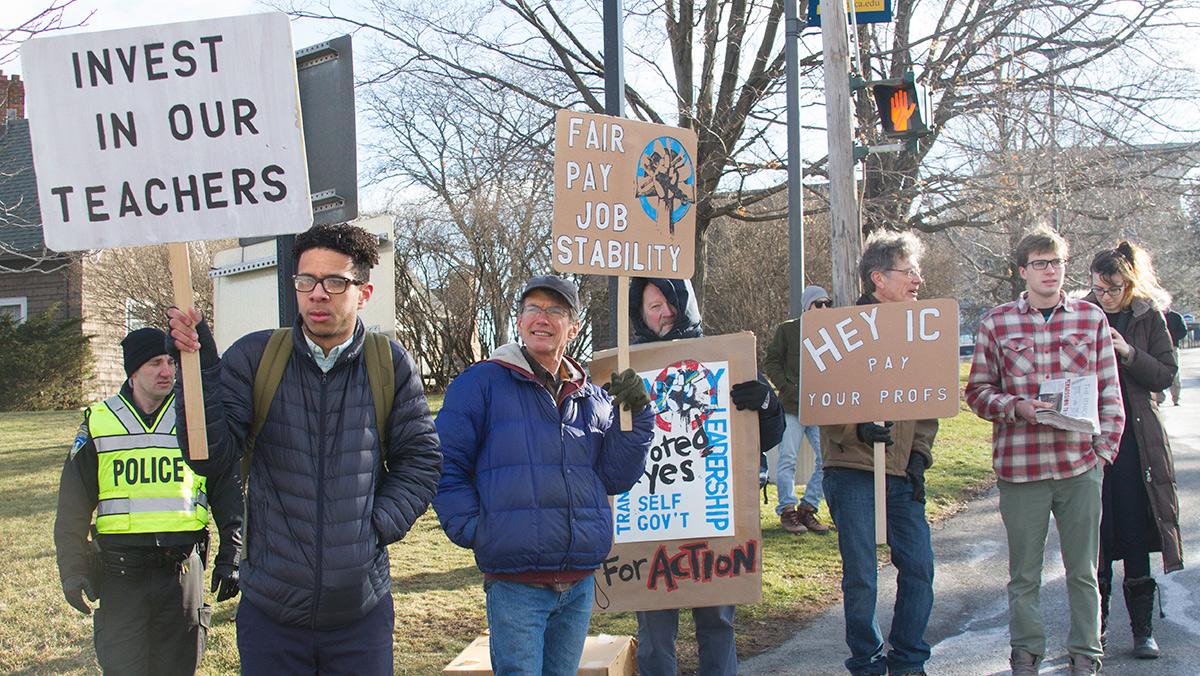 At 8:30 a.m. on Feb. 20, Pete Meyers, coordinator of the Tompkins County Workers Center, placed an amplifier at the front entrance to Ithaca College and plugged in a microphone. Into it, he shouted:

The demonstration was the latest effort by the contingent faculty unions at the college to put pressure on the administration to meet their demands. The unions — the contingent part time–faculty union and the full time–faculty union — have been negotiating with the college since October 2015 to establish a first-time contract. The part-time faculty has tentatively settled one of its goals with the college, to establish longer–term contracts, but is still negotiating raising its compensation. The full time–faculty union is primarily focused on longer-term job security while also asking for a base minimum pay — a contract element that currently does not exist for them.

Meyers, a main organizer of the demonstration, said he wanted to hold the protest on Presidents Day because many families were scheduled to visit the college for tours on the holiday. He said he wanted to make sure prospective students were aware of the issues the unions were facing at the college.

“Everyone should make a living wage,” Meyers said. “My organization is very much about living wages … including the professors who are teaching students.”

From about 8:30 a.m. to 10 a.m., supporters took turns taking their grievances against the college administration to the microphone. Alumni and faculty members spoke about why they felt the contingent faculty needed higher pay and job security. Many cited the high administrative pay as one reason they felt the faculty deserved to be paid more.

While protesters were demonstrating at the entrance to the college, student members of the Students for Labor Action club on campus were passing out pamphlets to prospective students in the Peggy Ryan Williams Center about the issues surrounding the union negotiations. Senior Taylor Ford, president of the SLA, said he wanted potential students to understand what was going on with the unions.

“We think prospective students and accepted students are stakeholders in this community … and so it’s important for them to be aware of the realities that are going on here,” Ford said.

As families were passing through the building getting ready to tour the campus, some expressed surprise for the protests they saw, while others were indifferent. Patrick Depratti was visiting the college from Connecticut with his daughter when he saw the protesters in front of the college. He said he did not see the protests as something negative and that he would not judge the college as a troubled institution just by seeing the demonstrations.

Allie Vanetti, from Cazenovia, New York, was visiting the college as a prospective student with her mother and said she did not find the protests off-putting. Her mother, Amy Vanetti, said she did not think this was just an Ithaca College problem.

“I think as a general trend in society it’s concerning, people not having any job security and not being paid for what they’re doing,” Amy Vanetti said.

Dave Maley, senior associate director for media and community relations at the college, said the college believes these demonstrations do nothing to advance negotiations and that it is committed to working with the unions through bargaining. Maley said he was not concerned that potential students would be turned off by the activism happening on campus.

The unions have two bargaining sessions scheduled for Feb. 21 and Feb. 24. As previously reported by The Ithacan, if the administration does not respond to the contingent faculty’s demands for proposals on higher compensation for part-time faculty and longer-term job security for full-time faculty at these meetings, a strike could be initiated.