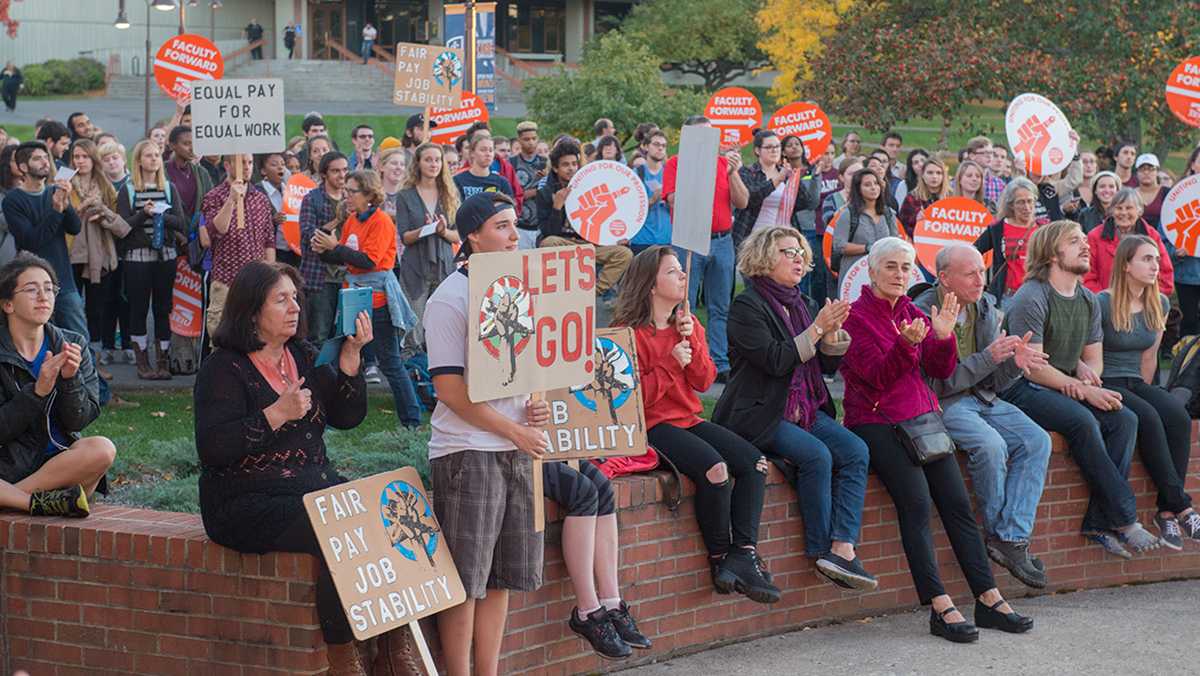 Samantha Fuller/The Ithacan
Pictured above is a previous rally held for the contingent faculty unions. Since it was held on Oct. 19, the part time–faculty union has made progress in negotiations with the administration but still remain stuck on compensation — the one issue that might send them to strike.
By Grace Elletson — News Editor
Published: January 25, 2017

For over a year, the Ithaca College administration has been in a contentious bargaining battle with two contingent faculty unions and the prospect of a strike is adding more pressure for the college to meet their demands.

The added pressure to finalize a first-time contract with both unions — one of part-time contingent faculty, the other of full-time contingent faculty — came with an announcement at the end of the Fall 2016 semester that the unions may hold a strike vote if negotiations do not progress to address two of the most difficult aspects of the contracts: job security and compensation.

An update on the bargaining process

In December, the full time–faculty union presented the administration with its first comprehensive proposals on compensation increases and job security extensions — the same two issues the part-time faculty has been stuck on with the college since August.

To avoid a strike, the administration has been proposing that bringing on a federal mediator would help ease both sides toward a solution. In December, the unions agreed to bring one on, said Brody Burroughs, lecturer in the Department of Art. A federal mediator is third-party government official operating under the Federal Mediation and Conciliation Service agency that is brought in when negotiations are close to nearing an impasse or a strike.

The administration has not given a compensation counterproposal to the full-time contingent faculty union in response to its initial proposal. Part-time professors at the college can teach up to 12 credits a year, and they are paid about $1,400 for each credit, which translates to a potential $16,800 a year. The administration’s most recent compensation offer for part-time faculty would give them a 2 percent raise, which is about $84 per course — a $14 increase per course.

The full-time contingent faculty union is also asking for longer contracts for professors who are rehired for classes that have a permanent need, Kornreich said. He said the average full-time contingent faculty contract is about one year long, which he said does not make sense for professors who are asked back to teach the same class for several years.

Though some progress has been made since the initial strike announcement in December, a strike is not off the table, Burroughs said.

What will happen to Ithaca College if a strike occurs?

The college has contested the power the unions would have if a strike did occur. In a statement released by representatives of the college’s bargaining committee in December, they stated that the part time–faculty union’s claim that it comprises 41 percent of faculty is “misleading” and that they teach only 14.6 percent of sections and 15.1 percent of credit hours at the college.

David Lipsky, Anne Evans Estabrook professor of dispute resolution at Cornell University, said a strike of this size would hurt the college’s public image and its financial stability.

Lipsky said the administration could approach the situation in two ways: It could redistribute classes to other professors to make up for the striking faculty or find cost-cutting measures to meet the demands of the unions.

Throughout the bargaining process, the administration has held firm to the belief that if salaries were to rise for contingent faculty, tuition would have to rise as well.

Gary Rhoades, director of the Center for the Study of Higher Education at the University of Arizona, said he does not give that argument any merit.

Rhoades said tuition at many institutions, including Ithaca College, is rising every year to adjust for rising costs and inflation, but he said that often, part-time faculty rarely ever see raises. Burroughs said the last raise part-time faculty had received before unionizing in May 2015 was in 2010. He said a raise every five years is not enough to keep up with the cost of living.

Nancy Pringle, senior vice president and general counsel of legal affairs, said that to criticize the college for not giving more frequent raises to part-time faculty is unfair because there are many other aspects of the budget to tend to than just salaries. She said on top of operational costs, the college also has to pay off debt it has taken on and address deferred maintenance, which has exceeded $200 million.

The most recent college faculty strike to occur in the U.S. was in October, when the Association of Pennsylvania State College and Universities Faculties (APSCUF) held a strike for three days and throughout 14 state colleges, affecting 105,000 students. The APSCUF were negotiating compensation, health insurance and various working condition complaints, said Kenneth Mash, president of APSCUF and professor of political science at East Stroudsburg University.

Mash said that when the union announced it would strike, it did garner support from the community. He said the union did not want to intentionally disrupt the colleges and that a strike was a last resort for them. But when the time came, Mash said, the community chose to rally behind them.

“When we finally did go on strike, we had some amazing student support,” he said.

Marieme Foote, president of the Student Governance Council at the college, said the SGC is remaining neutral toward the strike. She said she understands and supports the contingent faculty members in their fight for the compensation they think they deserve, but she said some students have expressed that they are concerned about a strike occurring, so she does not want to take a position for or against a strike.

Tom Swensen, professor and chair of the Department of Exercise and Sport Sciences and chairman of the Faculty Council, said he supports the right for faculty to unionize but would not comment if he supports a strike by the unions.

“I think people are hoping that the two sides come together,” Swensen said.

However, on Jan. 23, the writing department at the college issued a letter of support for the contingent unions on Intercom, calling for the community to support their efforts in gaining increased compensation and job security. Along with the sociology department, which released a statement of support for the unions Jan. 24, the Department of Writing also stated that it will not replace these faculty members if they choose to strike.

“My own sense … is that they would only strike if they feel the college is not negotiating with them in good faith, and if this is the case, I would absolutely support them,” Barlas wrote.

What success have other unions had?

The number of tenure-track faculty nationwide has dropped from about 80 percent in 1969 to about 30 percent in 2015, according to the Delphi Project on the Changing Faculty and Student Success. And about half of all faculty are part-time, according to American Association of University Professors. Rhoades said this lack of balance is one reason why unions are growing and having success.

Rhoades has researched the faculty union contract database maintained by the National Education Association and a handful of more recent contracts negotiated by the Service Employees International Union. He found on average that full-time contingent unions have negotiated to receive pay increases proportionate to how long the faculty members have been employed at the institution and that part time–faculty unions almost always see a raise — usually around 3 to 7 percent per year.

In only a few instances have faculty achieved dramatic compensation increases far from the 3 to 7 percent average. After negotiating a contract which was initiated in September, Tufts University part-time faculty will make at least $7,300 per course, far above the average $2,700 per–course average for part-time faculty, according to the Coalition on the Academic Workforce.

Part-time faculty members at Ithaca College were initially asking for a 42.8 percent pay increase per credit, or pay parity to full-time contingent faculty at half-time. However, they came down from the pay parity goal, and instead, they are asking for percentage increases over the years to eventually reach pay parity, Kaufman said.

Burroughs said the unions knew compensation would be the hardest aspect of the contract to negotiate from the beginning but that it is still dedicated to reaching its goal to acquire equal pay for equal work.

“When you’re talking about a small portion of credit hours or courses taught, it becomes a solvable problem in terms of the budget,” he said. “And we really feel that model of fairness based on how we pay people for work at this institution already is a better philosophical ground … than basing it on some market.”