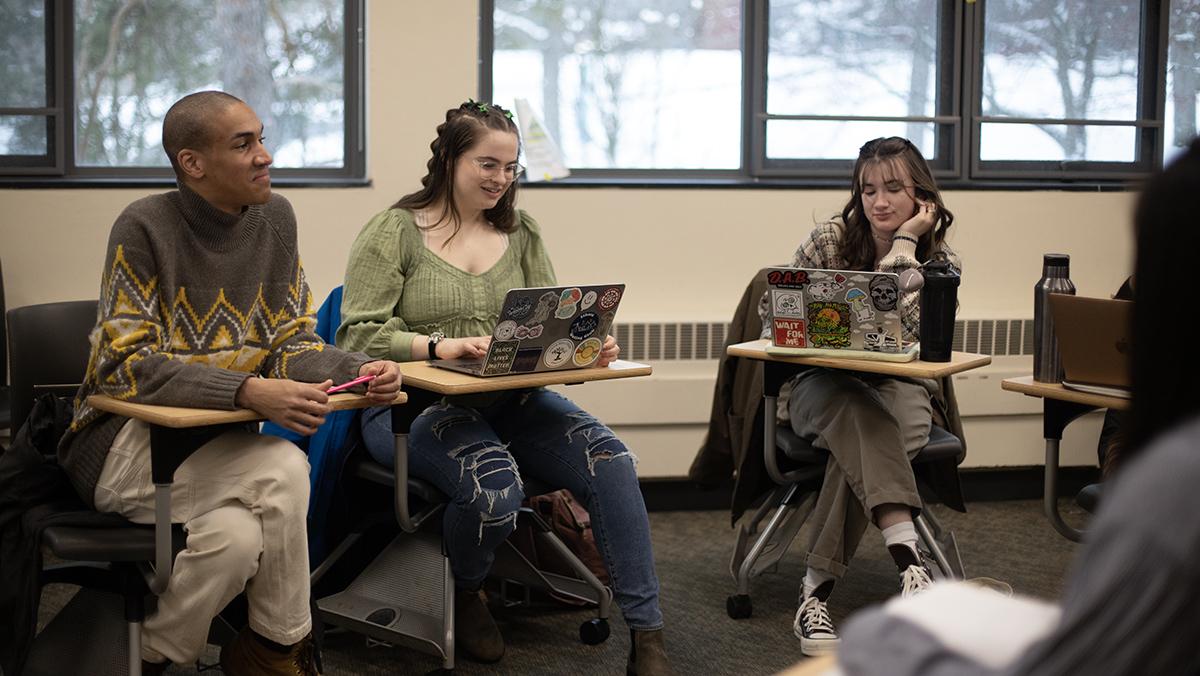 In Fall 2022, 16 Ithaca College students created a proposal to restructure the current diversity credit requirement of the Integrated Core Curriculum (ICC) to provide a more effective diversity education for students and training for faculty.

The proposed curriculum, called the Civil Liberation Curriculum, was created by the students in their Education, Liberation and Oppression class. The proposal also suggested changes to diversity training for faculty members to make them feel more comfortable and involved, thus promoting open conversations about anti-racism and diversity among faculty.

The proposal, including the curriculum and changes to faculty diversity training, was presented to Melanie Stein, provost and senior vice president for Academic Affairs; Michael Johnson-Cramer, dean of the School of Business; and Claire Gleitman, dean of the School of Humanities and Sciences, on Dec. 14. While the students had extended their invitation to President La Jerne Cornish and the deans of all five schools, only Stein, Johnson-Cramer and Gleitman attended it.

The ICC is the college’s liberal arts and general education curriculum, which was introduced in 2013. The diversity requirement is an aspect of the ICC that requires students to take at least three credits in a diversity-designated class.

Senior Morgan Kingsley, one of the authors of the proposal, said the suggested changes to faculty diversity training, like interactive diversity workshops instead of training sessions where faculty are uncomfortable sharing personal opinions and experiences, would be a medium for faculty to be able to execute the goals of the curriculum.

Kingsley said the aim of the curriculum is to create safe spaces for students inside the classroom and deepen the understanding of diversity, equity and inclusion among students of the college, which is a predominantly white institution.

“We kind of aired all our grievances in the beginning [of the class], which really created a close community and our lovely professor, [Sean Eversley Bradwell, assistant professor in the Department of Education], was like … we can talk in circles, but like, nothing’s going to happen until we take action,” Kingsley said. “So that’s why we thought a curriculum would be the best form of action.”

According to the proposal document Kingsley provided to The Ithacan, if implemented, students will be required to take nine credits as a part of the curriculum, which would be embedded in their majors but will be independent of the required courses in a student’s major. Three of the nine credits would have to be at a 300 or 400 level and another three credits must be obtained in an interactive, discussion-based class.

Kingsley said the proposal document has not been published yet, but publishing is something she will be discussing with the other co-authors.

Kingsley said the class divided itself into four groups to construct the curriculum proposal: the Professor Group, the Student Group, the Logistics Group and the Curriculum Group.

The Professor and Student Groups were in charge of reaching out to faculty members and students within the campus community to research opinions. The Logistics Group communicated between the President’s Cabinet and the class to schedule the proposal meeting. The Diversity and Curriculum group dealt with researching the current ICC-designated diversity credit requirements and created the outline for the curriculum.

Senior Ro Scanlon-Black, another author of the proposal, said that as a sociology major, they had taken many ICC-designated diversity classes and felt that the classes were not enough to increase awareness about diversity education.

“[The class] kind of started looking at the classes that are currently diversity credits, and I just got immediately so incredibly frustrated,” Scanlon-Black said. “Half of them shouldn’t be diversity credits. … Even when there are good diversity classes, there is a level of non-engagement from those who don’t really care.”

The IRB is a governmental body that assesses, evaluates and approves surveys that involve the research of human beings in order to protect their rights. Most institutions that are research-based have their own IRBs but are not required to have one and have the option of having an external IRB.

Kingsley said this led the group to step back and assess their course of action with students, which resulted in them conducting informal surveys via interviews with students on campus.

Scanlon-Black said the Student Group particularly took efforts to reach out to clubs and organizations on campus that were meant for students of color and spoke to some MLK Scholars.

“We kind of decided in the end that it’s important to talk about queer issues, and it’s important to talk about gender, but we kind of hide and put all of our time and energy into legibly white minority communities,” Scanlon-Black said. “So we wanted it to be race-based because we don’t think that the diversity credits themselves do that well enough.”

Susan Adams Delaney, outgoing director of the ICC and associate professor in the Department of Writing, said that while it is possible to make the curriculum a reality sometime in the future, the logistics of it will require a significant amount of effort because of the pre-existing challenges of funding and scheduling conflicts.

While Adams Delaney said she has not read the proposal and was not invited to the presentation of the proposal Dec. 14, she was interviewed by students of the class as a part of their survey process to understand the diversity requirement of the ICC in depth.

“A huge challenge [for the college] was and has been that we have five separate schools, and we have a mix of liberal arts programs and professional schools [and] some of those programs already struggle to be able to satisfy all of the ICC requirements,” Adams Delaney said. “Another piece of it then is something we’ve continued to struggle with for all of our initiatives across campus. … That is enough investment and faculty training and development so that faculty have a clear understanding of what they’re doing and how they’re doing it.”

Kingsley said she speculates that the college will choose which parts of the proposal they might want to implement. However, she said she is positive about the change it will bring to the academics of the college in the future and said she hopes to have some part of the proposal executed in the next five years.

“With us outlining this, we knew things weren’t going to change immediately. Although we did ask for that because we do believe that it’s urgent,” Kingsley said. “We outlined goals and outcomes and objectives to make it as simple as possible for professors to implement into their curriculums [in the future].”