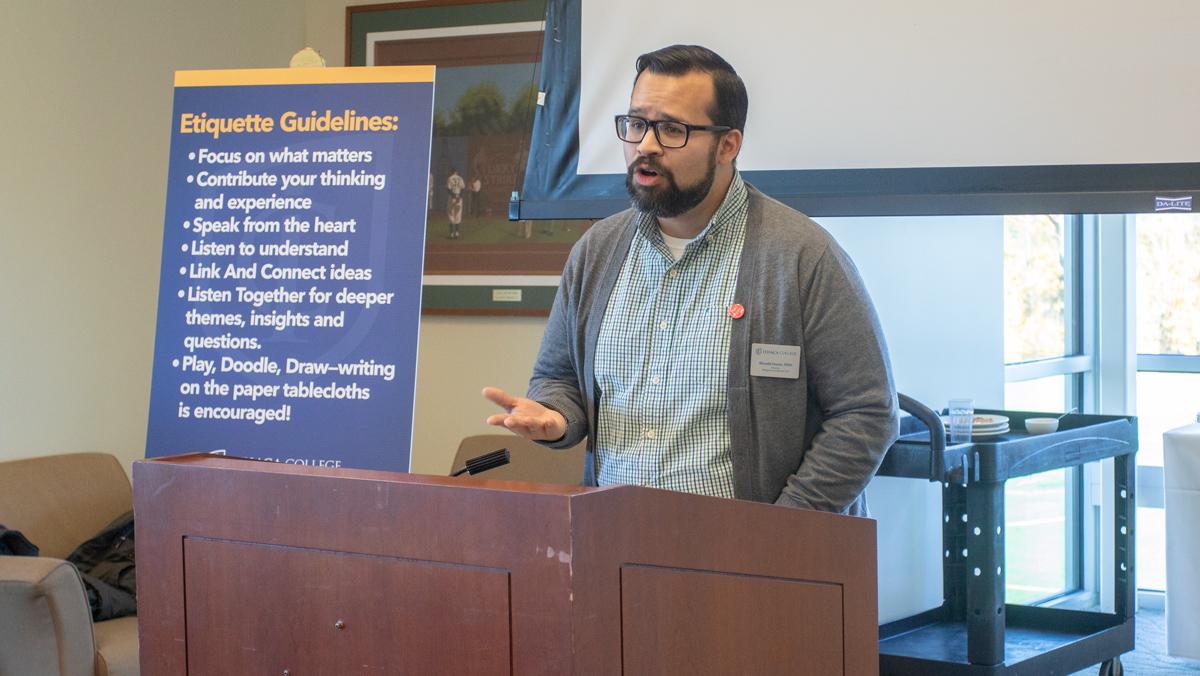 Members from the Ithaca College administration held an open forum Oct. 30 in response to requests from IC Color for the college community to have a dialogue about creating a safe environment for LGBTQ students in the religious communities on campus.

The forum was held in response to alleged exclusion within the Protestant community toward members of the LGBTQ community, as reported by The Ithacan. IC Color, a student group created in response to alleged incidents of exclusion in the Protestant community, was also present and had previously delivered a list of demands to the administration in May 2018, which the group says have not been met.

Hierald Osorto, director of religious and spiritual life; Luca Maurer, director of the Center for LGBT Education, Outreach and Services; and College Librarian Lisabeth Chabot facilitated the conversation. Approximately 30 community members attended the event, which was held in the VIP Room in the Athletic and Events Center. Various attendees expressed discontentment about how the event was organized and felt the conversation was not a productive dialogue. Several people left the event in apparent frustration.

Maurer began the event by reassuring community members that the goal of the dialogue was to clarify the questions and grievances raised about the college’s religious communities over the past year.

Osorto then highlighted the actions that were being taken by the college and the Protestant community to create an inclusive environment. The college created the Office of Religious and Spiritual Life in response to a proposal created by Roger Richardson, associate vice president of the Division of Student Affairs and Campus Life, and student leaders of campus religious communities, which will be heading many of these changes.

Osorto also discussed potential organizational changes, which would require board members to participate in diversity training and add a new grievance procedure, asking student members about their pronouns and outlining expectations for how members of the Protestant community should deal with conflict and difficult discussions.

Osorto and Maurer facilitated a “word cafe conversation,” in which they asked those in attendance to answer questions written on notecards scattered across the room. The tables were covered with paper that attendees were encouraged to write their answers down on. Several attendees left the event prior to its conclusion.

Once the conversations began, some people in attendance brought up concerns that many attendees came with questions, and they asked if the table discussion could be bypassed. Maurer said they were going to stick with their original organization.

“If you came with very specific questions that you wanted to make sure got answered please feel free to both write them on the pieces of paper and bring them up after we rotate through this a couple of times to give people the chance who do not want to bring these up out loud to write them down,” Maurer said.

Senior Annalise Haldeman, one of the founders of IC Color, said she thought the written activities were not sufficient.

The Q&A portion began after the word cafe conversation ended. Instead of the session lasting five to 10 minutes as it had been scheduled, it lasted for approximately 40 minutes.

Senior Vanessa Zimmerman, co-founder of IC Color, asked Osorto if he has experienced discrimination in religious communities in the same way she had and if he thinks that the administration has done enough to address the discrimination.

Osorto said he believes the administration has not done enough, because the LGBTQ community has faced oppression for so many years that no action will ever be enough.

Junior Andy Yzaguirre asked Osorto and Maurer if they had any further steps in mind to address the problems between the Protestant and LGBTQ communities.

“One of the action steps will be creating an ad hoc student group for whoever is interested to create a memo of how we can enter into a relationship with these religious communities,” Osorto said. “We’re looking for your input because this is work that will take time — a significant amount of time.”

“How do we address homophobia when we’re calling it exclusion and not calling it by its name?” Haldeman said.

She said by not doing this, the college is not holding the people in the Protestant community who discriminated against her and other students accountable.

Osorto said he completely agreed with Haldeman’s argument, and he relates to how she is feeling because he has experienced discrimination as well. He said he believes in the college’s commitment to change.

“I’m just trying because I believe there’s something better out there for us, and I do believe in Ithaca College and its commitment,” Osorto said. “I wouldn’t be here if it weren’t the case.”

After the event was finished, Haldeman said she was disappointed with the way it was organized and conducted.

“We have to acknowledge that this is the farthest room on campus, that students are not able to make this time period most often and that these are strategic moves,” she said.

She said the event did not properly address the issue at hand and believes that much more needs to be done.

Zimmerman said she was disappointed that the higher–up administration, who they had worked with previously to address these issues, did not attend the forum. Zimmerman and Haldeman said they expect a statement from the college that acknowledges the homophobia and racism they have experienced, using those specific words.

Maurer said the reason the event was held in the VIP Room in the Athletic and Events Center was because it was a location that had enough gender–neutral bathrooms and was wheelchair accessible. He said the timing of the event was during the noon hour because no classes were scheduled and that lunch was served for students with dietary restrictions in order to make sure that they could attend.

“I thought that it was important not to have Dr. Ferro present,” he said. “But that doesn’t mean that Dr. Ferro wasn’t supportive of the event. Dr. Ferro was a part of the planning process and that includes Dr. Richardson as well. Both are active and committed individuals in this work with us.”

Osorto also said that it was important to note that there are other students on campus that are struggling with the intersection of faith and sexuality and that the event was to address a range of concerns and experiences, not just the experiences of one specific group.

“The event was aimed toward having as many different kinds of individuals that have experienced this campus either in good ways or in bad ways to come together to the table,” he said. “And that included a few students who were connected with the Protestant community last year, but it also included other students that are still uncertain of where to go to have the conversation of how their faith connects with who they are, specifically as LGBTQ people.”

Correction: A previous version of this article incorrectly stated that 10 attendees left at the beginning of the “cafe conversation” component of the event. The attendees that left the event early did not all leave during that time.