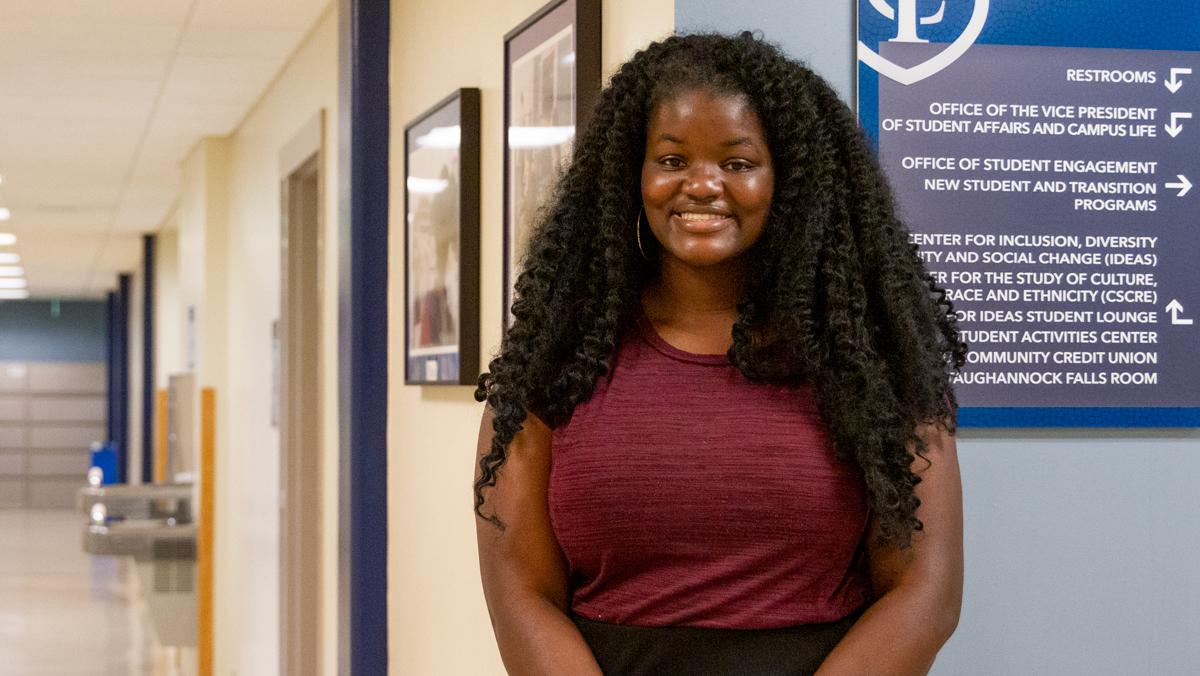 Alyssa Beebe/The Ithacan
In past years, the two programs were run separately, but Shadayvia Wallace officially took position as the director of both programs Aug. 16
By Olivia Stanzl — Contributing Writer
Published: August 26, 2021

Shadayvia Wallace is the new program director for both the Martin Luther King Scholar Program (MLK) and First Generation Programs at Ithaca College.

In past years, the two programs were run separately, but Wallace officially took position as the director of both programs Aug. 16 following the departure of RahK Lash, previous director of Center for Inclusion, Diversity, Equity and Social Change (IDEAS) and former director of the MLK Scholar program in Spring 2020. Each year the college supports 60 total MLK Scholars and hundreds of first-generation students.

The Martin Luther King Scholar Program is a stand-alone program that includes a $25,000 scholarship. The scholarship program allows students to study civil and human rights and develop case studies in global justice. Under the leadership of faculty, students are challenged and supported to develop their reach and impact in Tompkins County, according to their website.

Wallace spent the previous four years at Le Moyne College in Syracuse, New York where she was the Program Coordinator for the Office of Inclusive Excellence and Global Education, after serving as Area Director. After earning a B.A. in Political Science and History and a minor in communication from Keuka College, Wallace received her M.S. from Syracuse University.

Originally, she said she planned to attend law school, but after being nominated to become a student mentor her senior year of college, she began to notice the passion that she had for higher education.

“I soon recognized that during my college career, I was heavily involved on campus participating in numerous initiatives within our Multicultural Office and Activities and Student Affairs offices as a work-study student,” Wallace said via email. “All of my experiences shaped my desire to be in a career that was in service for others. Higher education just became that vessel for me.”

Hierald Osorto, executive director for Student Equity and Belonging and Religious and Spiritual Life, led the search process for the Program Director position. Osorto said the college believes first-generation students and Black, Indigenous and People of Color (BIPOC) students will receive the increased attention that they deserve if the departments are run by the same director.

He said the college wanted someone who is passionate about their students, experienced with collaboration and has an inclination to take risks.

“Wallace’s commitment to student voices stood out to me,” Osorto said via email. “First Gen and BIPOC students have important stories to tell, and her hard work and track record make me confident that she will honor her students’ experiences.”

Senior Olivia Carpenter, who has been a part of the MLK Scholar program since her freshman year at the college, said she hopes Wallace will bring positive change to the program.

“I would like to see the program itself become more active again,” Carpenter said. “In the chaos of the pandemic, we all had to take some time to be okay. Hopefully this semester, we are all able to get together again and have the kind of conversations we had in my earlier years at the college.”

Carpenter credits the program for shaping her into who she is today. She said the coursework inspired her to start her business, Via’s Cookies, which donates a portion of its profits to struggling BIPOC and LGBTQ students.

“Having a community of like-minded individuals with a passion for social justice has kept me pushing to be the best person I can be,” Carpenter said. “I’m constantly questioning the world and my own environment — looking at what I can do better for the community.”

Junior Laura Avila, vice president of First Generation Organization, has been a part of the program for two years. She also credits her membership as having a positive influence on her life.

“Being a part of first gen has provided me with a myriad of friendships and resources which made a substantial difference in my adjustment to college,” Avila said via email. “As well as my outlook on college education as a whole.”

Wallace said she is eager to settle into her new position and plans to grow both programs’ social media presences. Wallace said she believes this will help create and maintain a connection with alumni, highlight current students and excite incoming students with their opportunities.

Wallace also said she intends to take the 2021–22 academic year as an opportunity to learn, observe and connect, in order to align the program goals accurately to what students need on campus.

“Because the MLK Scholar and First-Generation programs have specific populations that I am working with, I want to create programming and initiatives that would best support these groups of students,” Wallace said via email. “To me, that means that I need to take the time to meet with the students and campus collaborators to see what gaps are within each program and reflect on viable ways to fill them.”