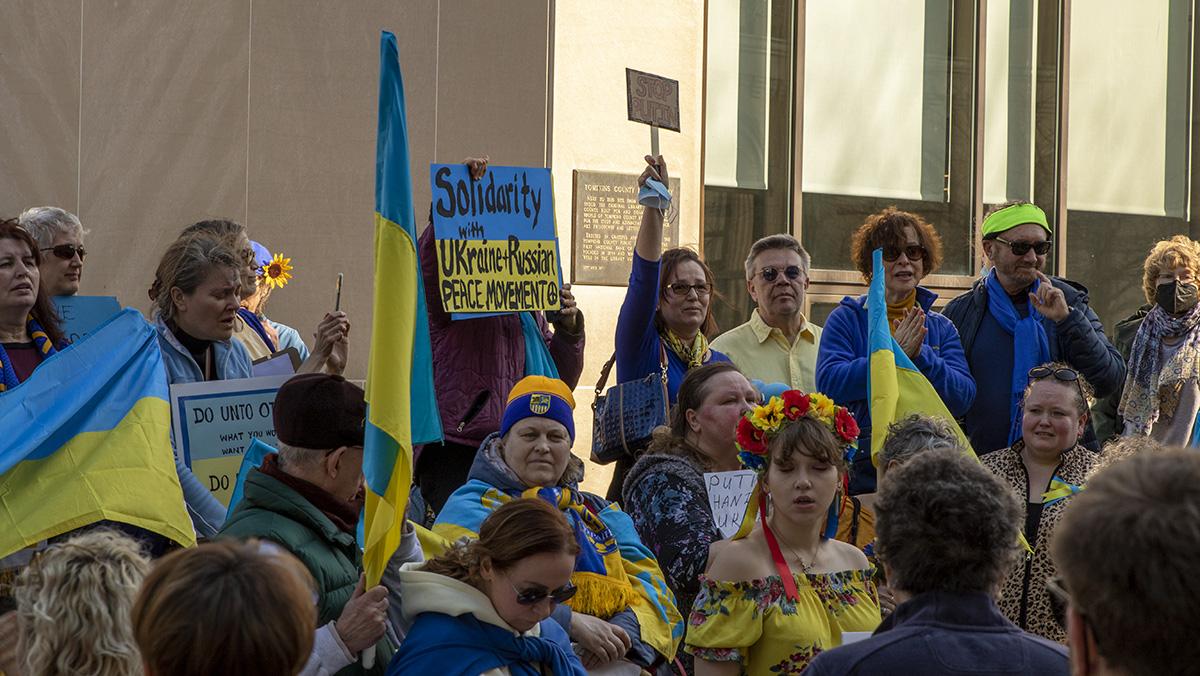 Ash Bailot/The ithacan
The Ukrainian community of Ithaca and its allies gathered in the Bernie Milton Pavilion on the Ithaca Commons March 6 to protest the Russian invasion.
By Elijah de Castro — News Editor
Published: March 8, 2022

Since the beginning of the Russian invasion of Ukraine, the Ukrainian national salute “Слава Україні” or “Slava Ukrayini” — which means “glory to Ukraine” — has become a symbol of resistance. On March 6, this salute was chanted by the Ukrainian community of Ithaca during an anti-war protest at Ithaca’s Bernie Milton Pavillion.

As the war concludes its second week, protests supporting Ukraine and opposing the Russian invasion have spread around the world, including in Russia, where protesting the war is illegal. At the March 6 protest on The Commons, about 80 people attended, waving Ukrainian flags and carrying anti-war signs.

Tetiana Urazhildiieva, a Ukrainian American from Ithaca, attended the protest with her son. Urazhildiieva is from Kyiv, the capital of Ukraine, which has been at the center of the Russian offensive. Urazhildiieva said that since the invasion has begun, she has lost sleep while trying to stay updated on her family and two sons, who are in Kyiv.

“My eldest son is in college already,” Urazgildiieva said. “He called me [the first night of the invasion] saying, ‘Mom, it’s war, but I can’t believe it.’ I started looking into the news and I realized that it is happening. My first reaction was to call my relatives. They were in shock. They were so scared at first and it probably took them a day just to realize what was happening.”

Throughout the invasion, the Russian military has attacked Ukrainian civilians, sometimes with illegal munition like cluster bombs, which detonate in flight and can destroy anything in a radius of several football fields. Russian forces have attacked nuclear power plants, holy sites and schools. On Feb. 28, 16 Ukrainian children were killed in a nursery school bombing in Okhtyrka, a city in northeastern Ukraine.

“I do not sleep,” Urazgildiieva said. “I do not. I just checked in with each one of them [her family members]. If they are in contact, I am relieved for today. But if I lose contact, I cannot continue doing anything, even though I need to go to work. My mind is over there constantly. It’s very, very difficult.”

Jonathan Ablard, professor in the Ithaca College Department of History, attended the protest to show solidarity with Ukraine. On March 3, Ablard and Zenon Wasyliw, professor in the Department of History, moderated a discussion panel on the war in Ukraine that had over 550 attendees. Ablard said the protest gave him sadness and frustration that the issue is larger than the actions that one person can do to help.

“It made me sad to have it reinforced that there’s no clear answer for what we can do in the United States,” Ablard said. “It is heartbreaking, and to see people whose families are in real peril made it all the more poignant.”

Olena Vatamaniuk, professor at Cornell University, and her husband Marco Vatamaniuk, senior research associate at Cornell, are from Lviv, Ukraine, and attended the protest.

“I could say to everyone that this goes beyond Ukraine because it just shows you that it is possible for this to happen in the 21st century,” Olena Vatamaniuk said. “If the world won’t stop it, then which country will be next? It’s a nightmare for us. We don’t really sleep.”

At the protest, flyers were pasted around the Bernie Milton Pavilion with QR codes that link to fundraisers, petitions and Google Docs with letter templates for protestors to send to their representatives.

Despite this, the protestors had differing views on how to resolve the war. Some, like Urazgildiieva, called for the North Atlantic Treaty Organization (NATO) to declare a no-fly zone over Ukraine. This would mean that all aircraft would be barred from flying in Ukrainian airspace. Russian planes that continue to fly over Ukraine would be shot down by NATO planes. While declaring a no-fly zone would help protect Ukrainians from Russian shelling, it would escalate the war. If a no-fly zone were to be declared, the war would escalate and would be between Russia and NATO, both of which are nuclear superpowers.

“They should cover the skies,” Urazgildiieva said. “A no-fly zone is very, very important. Today, over a peaceful city of Vinnytsia, they bombed civilians. Why would they do that? Just to scare us, to break our strong souls and our strong minds.”

Amala Lane, program initiatives and media coordinator for the Center for International Studies at Cornell, said that while the war has flooded her with tremendous sadness, she understands the reluctance to declare a no-fly zone.

“I’m older, so I saw the Berlin wall fall,” Lane said. “East Europe is where this happened. I have friends who were dissidents and they were in prison. Some of my friends were really quite abused by the Russian Secret Police. … It would be insane not to have concerns about this escalating, which is why I understand there is reluctance to establish a no-fly zone.”

Laura Lewis, acting mayor of Ithaca, attended the protest and said the invasion was frightening to her, but she was impressed by the courage of the Ukrainian people defending their country.

“I was horrified, terrified for Ukrainian people,” Lewis said. “At our common council meeting a week ago, I began our meeting by stating what a sobering week [it] had been and how impressed we all are to strengthen the resilience of the Ukrainian people. … I also take a lot of hope from the [protesting] Russians who are standing up. The repercussions for them could be quite serious.”

At the protest, packets of sunflower seeds were distributed in reference to a popular video of a Ukrainian woman offering Russian soldiers sunflower seeds so “at least sunflowers grow when they die.” Videos of Ukrainians stopping Russian tanks have also gone viral, symbolizing the intensity of the Ukrainian resistance.

“Even [Ukrainians] who speak Russian, they come out of their homes without any weapon and tell the occupying Russians to go away,” Marco Vatamaniuk said. “The Russians, who speak the same language [as these Ukrainians], won’t go away. They tell the Russians ‘We don’t need you here. When you come here, it’s only war and death surrounding you.’”