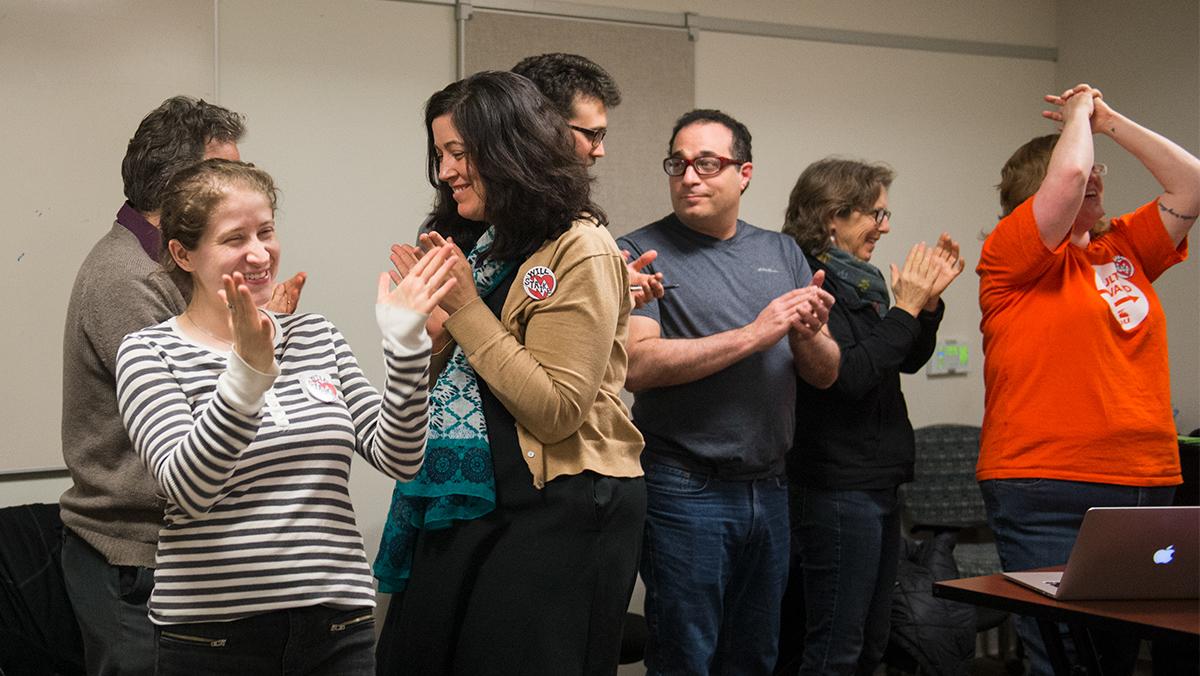 Sam Fuller/ The Ithacan
Ithaca College contingent faculty members celebrate as they reach an agreement with the administration regarding contracts during a bargaining session on March 27.
By Grace Elletson — News Editor
Published: March 26, 2017

In the basement of the Peggy Ryan Williams Center at 11:15 p.m. March 26, the Ithaca College contingent faculty unions were at first silent, some faculty shaking their heads in disbelief. As the signatures on a tentative contract agreement between the unions and the administration were being completed, the contingent faculty began to cheer.

They hugged each other and pumped their fists in the air, following 17 months of bargaining to establish a first-time contract. Their two most formidable goals were met: job security and higher wage compensation.

The agreement does not stray far from the publicly announced proposal the college published March 23, which offered the part-time faculty a 22 percent raise over four years for three-credit courses taught and offered the same job–security package for full-time faculty. Brody Burroughs, lecturer in the Department of Art, said the reason the unions did not originally accept the proposal was that they wanted to negotiate in more perks for the membership, like the job–security package for part-time faculty, which was not in the previous proposal.

The contract is only tentative — the union membership still has to ratify the document. Megan Graham, assistant professor in the Department of Writing, said details have not yet been worked out on how the vote will operate but that it will occur in the next couple of weeks.

The contract means that the strike, originally planned for March 28 and 29, has been officially called off. Rachel Kaufman, lecturer in the Department of Writing, said that during the March 26 bargaining session, which lasted 10 1/2 hours, the administration offered the unions more than they ever had throughout the bargaining process. The reason for this, said Shoshe Cole, assistant professor in the Department of Physics and Astronomy, was the power of the collective.

Graham said the agreement would not have been reached if it were not for the outpouring of support from the college community pressuring the administration to make a deal.

“It was solidarity that did it,” Graham said.

The college bargaining committee has maintained throughout the bargaining process that in order to give the contingent faculty a raise in compensation, tuition would have to raise as well because the college’s budget is predominantly tuition-driven. Nancy Pringle, senior vice president for the Division of Human and Legal Resources and general counsel, said in an email that this will not be the case for the first two years of the compensation increase installments. For the 2017–18 academic year pay raise, the college had anticipated a need to fund a compensation increase in the upcoming budget cycle for part-time faculty, so funds have been reserved, Pringle said. For the 2018–19 and 2019–20 academic years, she said, the salary increases are in alignment with the normal salary increases that will be provided to all staff and faculty.


For the last two years of the compensation increase installments, Pringle said, the college expects that the raises will be employed “with minimal disruption to the overall tuition increase.”

Burroughs said that although the union recognizes this contract as a big win, it already has its eyes set on its expiration date three years from now to continue the climb toward pay parity to full-time contingent faculty.

“It’s not parity, but it’s progress towards parity,” Burroughs said. “And it represents a significant step.”

Graham said that while she is also happy with the tentative contract, she will still struggle as a contingent faculty member. She said she is currently negotiating a part-time position for Fall 2017 because her current full-time position will not be needed next semester. While full-time faculty receive health care benefits, part-time faculty do not, so Graham will have to do without the benefits if she receives the position. This, along with pay parity, is something she said could be addressed in the next contract negotiations depending on what the union membership wants.

Despite this success for the union, the unfair labor practice lawsuit still stands against the college, Cole said. Cole; David Kornreich, assistant professor in the Department of Physics and Astronomy; and Rachel Gunderson, instructor in the Department of Health Promotion and Physical Education, filed the lawsuit against the college for allegedly not rehiring them for their positions in retaliation for their participation in the union, according to a news release circulated by the union March 9.

Cole said the purpose of the lawsuit is to either get the jobs back for her and the other faculty or come to a settlement. Kaufman said no dates have been decided as to when the lawsuit will be further discussed with the college.

“There is still justice that needs to be served for faculty,” Kaufman said.

The administration’s bargaining committee released a statement after midnight March 26 that the contract had been signed, saying it is confident that the contract is a fair one and that it addresses the concerns and needs of the faculty.

“We would like to thank the union bargaining committee for working so diligently with us to resolve the remaining contract issues, arrive at an agreement and avert a strike,” according to the release. “We are deeply grateful for the commitment to come to an agreement during this session.”