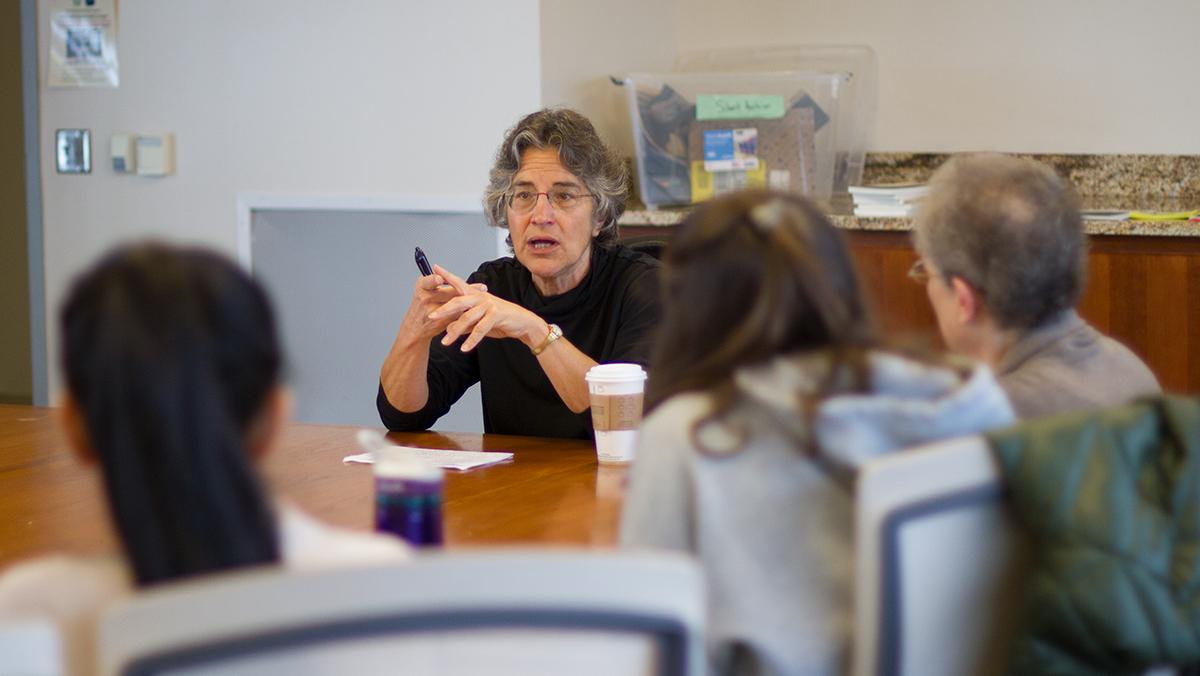 Students, faculty and Ithaca community members gathered April 20 in the Dorothy D. and Roy H. Park Center for Business and Sustainable Enterprise to discuss their concerns, fears and frustrations about foreign policy and the increased use of the military under President Donald Trump’s administration.

The event consisted mainly of a lecture by Phyllis Bennis, a prominent American writer, activist and political commentator who specializes in Middle Eastern politics. A question-and-answer session followed the lecture, and many expressed their concerns about the United States’ intervention and actions abroad. Bennis was brought in by the Department of Politics, and approximately 15 people attended, most of whom were members of the local Ithaca community.

Patricia Rodriguez, associate professor and Latin American studies coordinator in the Department of Politics, said she decided to organize the event because of what is at stake under the Trump administration.

“Foreign policy under Trump comes at a critical moment to reflect on and have a discussion about what is happening around the world, especially about the United States’ policy and involvement in the Middle East,” Rodriguez said.

The discussion touched upon Trump’s actions since in office, including his recent bombing of Syria. Bennis said these bombings have many worried about the United States’ increasing militarization. Trump said bombing Syria was in retaliation of Syrian President Bashar Assad’s gassing of his own people, but Bennis said the White House has provided little to no proof of Assad using chemical weapons.

Bennis said Trump’s order to bomb Syria violates both domestic and international law. The president of the United States is given authority under the War Powers Clause to intervene in a foreign country for up to 60 days while notifying Congress within 48 hours, but the president can only use force in three circumstances, with which Trump did not comply.

The three conditions are: if Congress declares war, which Congress has not done since World War II; if there is existing authorization for the use of force, which there is not for the U.S. and Syria; and if there is an immediate attack on United States citizens or troops, which also did not occur. Bennis said this violation is not something exclusive to Trump, as former presidents acted similarly in Vietnam, Korea and other unofficial wars, but it is still a violation of the law that should be taken seriously.

Many attendees expressed concern that the United States is in perpetual war, without establishing explicit goals.

“We are escalating wars with no claimed goals,” Bennis said. “We are not talking about bringing democracy to Afghanistan anymore, or regime change in Somalia. We are just talking about wars, raw power and force.”

Trump announced that his proposed military budget will give an additional $54 billion to the Pentagon, and the Trump administration suggested the budget cuts would come from agencies such as the Environmental Protection Agency.

Bennis said she is worried about Trump’s interventions and threats to intervene in places such as North Korea because she said former President Barack Obama’s legacy showed that successful diplomacy has only come about in countries in which the United States did not intervene. She gave the example of Iran, saying that because the United States did not invade Iran, it was able to negotiate a Nuclear Deal that restrains Iran’s access to nuclear weapons.

The group also discussed the series of Muslim bans under Trump. Many, including Bennis, said they thought the Muslim bans served as a tool to alienate Muslim-Americans and justify wars in the Middle East and South Asia, such as Iraq and Afghanistan. This has been a pattern with the United States since 9/11, Bennis said — punishing all for the actions of some within a community.

“You don’t punish entire groups for the actions of 19 people,” Bennis said.

Jeff Cohen, associate professor in the Department of Journalism and director of the Park Center for Independent Media, asked how the United States can get progressive groups and candidates to care more about foreign policy issues and put them at forefronts of campaigns.

“They critique social security being cut, but they just won’t talk about drones or the military,” Cohen said.

Many others in the room expressed concern and fear that their voices were not being heard, and many flyers for local protests in both Ithaca and Syracuse were handed out.

Politics graduate Rafael Gilbert ’16 said he came to hear Bennis speak because he heard a lot about her work. He said he enjoyed hearing her perspective, given her knowledge and experience in the field.

Many movements have responded to Trump’s actions, and Bennis said she wants to send the message that people are mobilizing and it is still possible for progressive, antiwar voices to be heard.