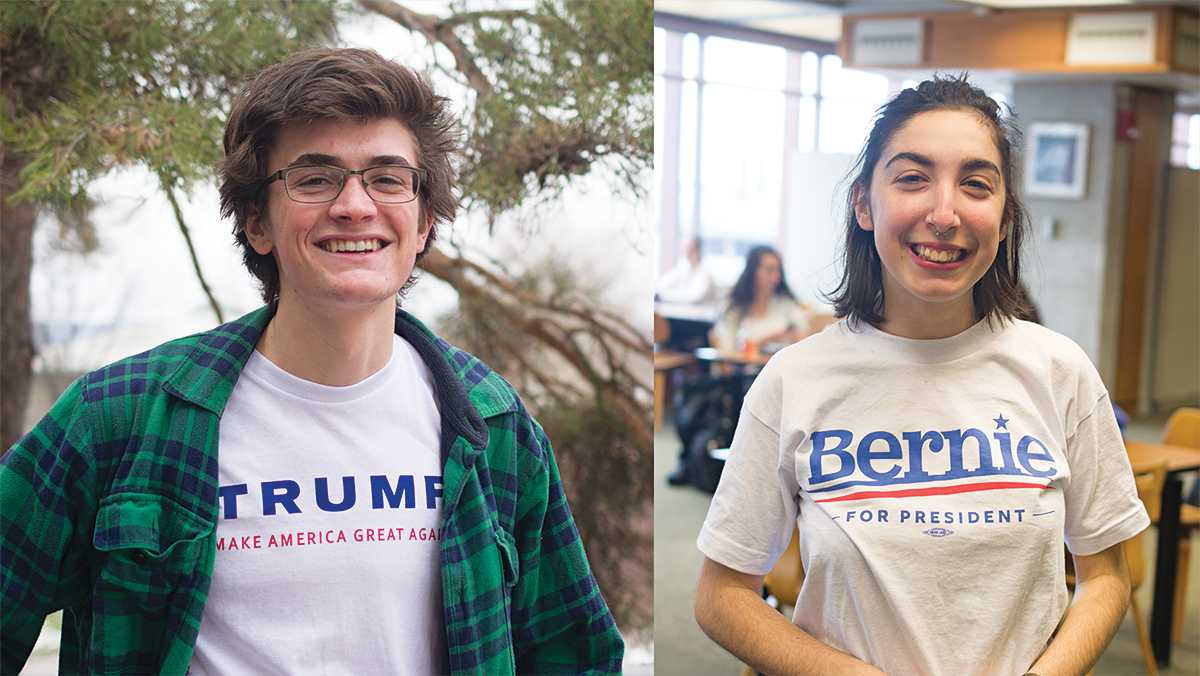 In perhaps the most dramatic presidential election cycle in recent history, which features a demagogic billionaire and a self-declared Democratic Socialist competing against more traditional politicians, it is not unusual while walking around Ithaca College to hear talk centered around the Democratic and Republican presidential primaries.

“I think this 2016 election has probably been one of the most interesting in at least the past 100 years,” sophomore Kyle Stewart said. “Definitely in my short lifetime of 20 years.”

This interest is translating into increased youth voter turnout thus far in the primaries compared to 2008, the last year both Democrats and Republicans held contested presidential primaries, said Kei Kawashima-Ginsberg, director of the Center for Information and Research on Civic Learning & Engagement. CIRCLE, a group based out of the Jonathan M. Tisch College of Citizenship and Public Service, concentrates on “the political life of young people in the United States, especially those who are marginalized or disadvantaged.”

“We’re generally seeing that the young Republican primary vote participation has been record-breaking, we could almost say record-shattering in some cases,” she said. “The turnout has been increasing by 10,000, 20,000, 30,000.” 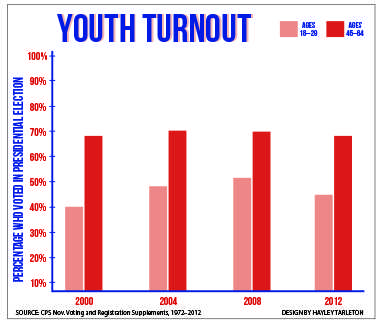 Kawashima-Ginsberg said that while older Republican voters tend to vote for Donald Trump, younger Republican voters have been far more divided. As an example, she used the March 15 primaries in which Kawashima-Ginsberg said exit polls show Trump won the youth vote in Florida and Illinois, albeit by a small margin. But she said Trump lost the youth vote in North Carolina and Missouri to Texas Sen. Ted Cruz, although he did win the overall vote in those states. He lost both the overall and youth vote to John Kasich in Ohio.

This points to some discomfort toward Trump among Republican youth voters, Kawashima-Ginsberg said.

“There’s some anecdotal evidence that suggests that young people who are really engaged and informed are coming out in primaries to say, ‘This is not the candidate we would like to see as our front-runner,’” she said.

One of those young Republicans at the college opposing Trump is Stewart, who said he’s supporting an alternate candidate.

“I’m a John Kasich supporter,” Stewart said. “The problem is he’s trailing, and he would need 116 percent of the remaining delegates to get the nomination. And so that’s disappointing, but I’m voting for John Kasich because his positions match mine for the most part, and I think he’s the most level-headed in the race right now.”

Stewart said he’s heard talk about the election around campus but said much of it seems to be complaints about the current set of candidates. Stewart said he started off as a fan of Wisconsin Gov. Scott Walker and has ended up becoming a supporter of Kasich by default, as Cruz and Trump don’t appeal to him.

He said out of all the Republican candidates, he believes Kasich has done the best connecting with youth voters because he is more moderate compared to Cruz and Trump. It doesn’t seem as if Trump is at all concerned with courting the youth vote, Stewart said.

“I don’t think Trump has targeted to youth vote at all. He’s just sort of doing his own thing,” he said. “Trump targets more of the working class … mostly middle-age white men are his main demographic.”

Senior Nico Gianfrate, a Trump supporter, said the conservative friends he has are all Trump supporters. Gianfrate said he supports Trump because he views him as consistent and said he speaks his mind.

“He’s consistent, and he says things that all conservative people, some Republican people, are thinking,” he said.

One thing Gianfrate said Trump could do to increase his support among young people is specifically state his policies. He said most people inform themselves about Trump by what they see on the media, which Gianfrate said portrays Trump as a bigot.

Juan Arroyo, an assistant professor in the Department of Politics at the college, said the attention Trump generates could be an explanation for why youth voter turnout has increased on the Republican side. However, he said, Trump doesn’t really have an obvious connection with younger voters.

“Trump is rather older and has no real link to the younger generation,” he said. “Obama had this. Young persons’ support could be an expression of their desires to see change in the political system, even though they may not have thought through the details or consequences, which has to do, in part, with not knowing a lot about how the system works.”

Thomas Shevory, a professor in the Department of Politics at the college, said Trump has “a youth problem” in that his support tends to be tied to older voters. Shevory said an explanation for the high youth voter turnout on the Republican side could be the more competitive fight for the Republican nomination. He said that in 2012, the Republican nomination was wrapped up very early by former Massachusetts Gov. Mitt Romney over former Pennsylvania Sen. Rick Santorum.

“Romney became the clear front-runner after Super Tuesday, so it wasn’t much of a race after that,” Shevory said. “Youth voting on the Republican side is part of that same trend. This is a more competitive primary, with more galvanizing candidates than Romney and Santorum.”

On the Democratic side of the race, Shevory said, it is a bit surprising that the 74-year-old Sanders is receiving the lion’s share of the youth vote. However, he said when looking at Sanders’ policies, his popularity among young people makes sense.

“I think that part of it is just the economic problems that young voters see themselves facing,” he said. “The decline of opportunities in the job market in some sectors and the cost of higher education. Sanders is talking about free tuition for public education. Those are attractive ideas for young people.”

Senior Matilda Thornton-Clark, a Sanders supporter, said politicians in general are doing a better job of reaching out to young people.

“You see people getting engaged because these politicians are kind of reaching out to them and kind of directing their messages toward them,” Thornton-Clark said. “They hold their rallies in college towns, and I think that’s really telling because they’re looking to activate those young students.”

Shevory said the influence the turnout from the primaries will have on the 2016 general election will likely depend on who the nominee is. Shevory said if Clinton wins the nomination, she will likely benefit more from the youth vote than her Republican opponent — as youth tend to vote more Democratic — but less than Sanders would have benefited as the nominee. 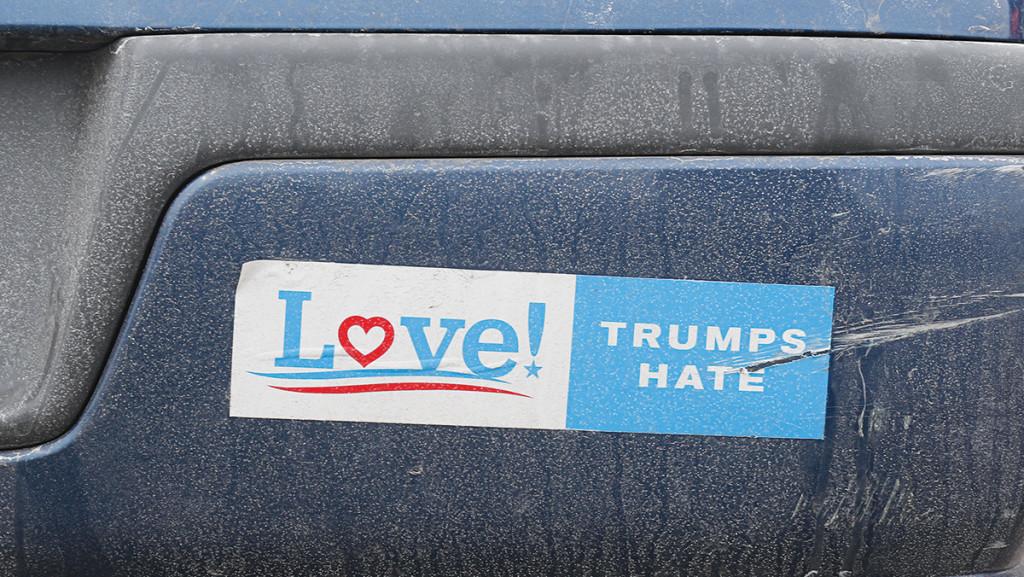 A bumper sticker with the words “Love Trumps Hate” alludes to the Trump campaign. Thomas Shevory, a professor in the Department of Politics at the college, said Trump has “a youth problem” in that his support tends to be tied to older voters. Yana Mazurkevich/The Ithacan

Sophomore Yena Seo, a Clinton supporter, said that especially in an election marked by extreme rhetoric on the Republican side, youth voters should coalesce around whoever becomes the Democratic nominee.

“I don’t think youth voters can afford to say, ‘The nominee that I wanted isn’t the nominee for the Democrats; therefore, I’m just not going to vote,’” Seo said. “Because that’s basically just handing a vote to the Republicans.”

Seo acknowledged that Clinton has an issue with attracting youth voters. But she said this is due to the issues Clinton talks about versus the ones Sanders is passionate about. She said Sanders’ talking points, such as providing free tuition at public colleges and universities, have a large appeal to youth voters who are worried about the cost of education.

Arroyo said politicians’ speaking about issues youth voters care about is one factor that increases turnout among young voters. Aside from Sanders, Arroyo said, another politician who has successfully utilized the youth vote is President Barack Obama. According to a Pew Research Center story from 2008, then-Sen. Obama bested Clinton in the youth vote in 2008 in the majority of states.

However, Arroyo said the youth vote is not as influential as other voter groups. He said even though youth participation in voting has increased, it is still lower than other groups — such as senior citizens — who vote more regularly than youth. Arroyo said political parties could put more effort into mobilizing and cultivating youth voters.

Overall, Thornton-Clark said the youth vote is important because young voters are less rigid in deciding whom to vote for.

“Older generations — they already have their candidate. They know who they’re going to vote for, and there’s no changing that,” she said. “So the younger people are where the sway is, and they’re what’s actually going to decide the election, I think, on both sides: Republican and Democrat.”