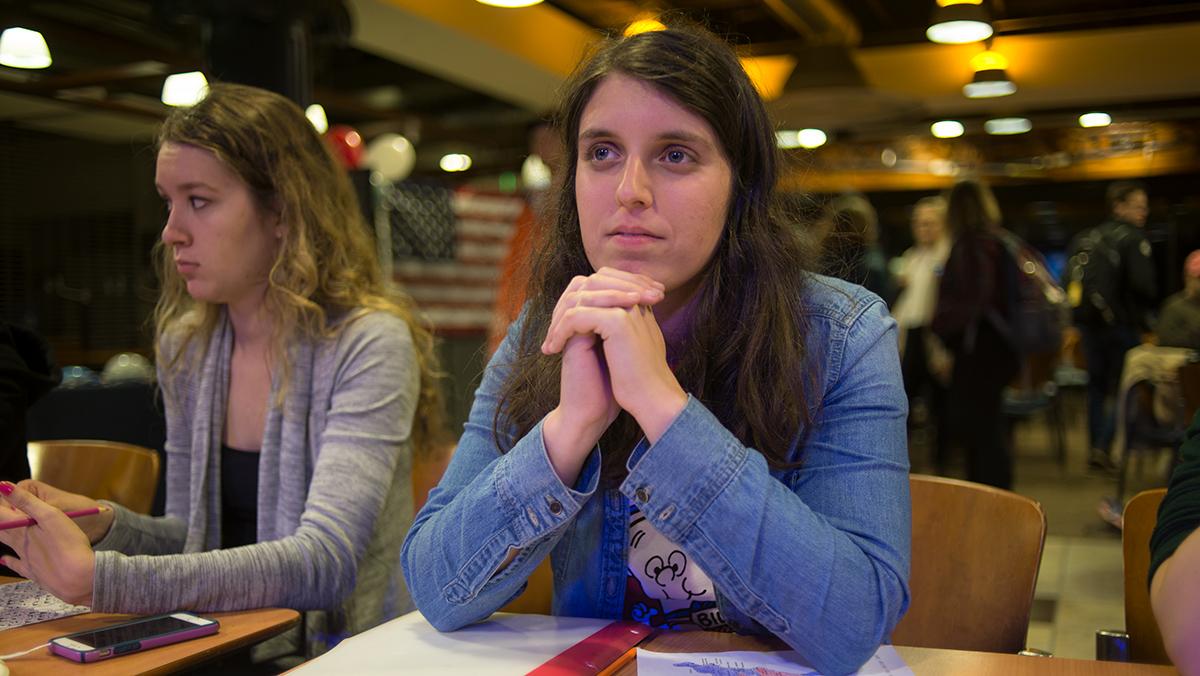 Fernando Ferraz/The Ithacan
Senior Emma Whitestone watches the results of the 2016 race during an election-watching event in IC Square. She writes that progressives must be welcomed more by Democrats.
By Emma Whitestone — Columnist
Published: November 9, 2016

After Democratic presidential nominee Hillary Clinton announced her candidacy in 2015, analysts predicted she would easily win her party’s nomination. She ended up being nominated at the Democratic National Convention, but her road to Election Day was not so simple. Clinton and the Democratic Party have been confronted by scandals, protests and an unexpectedly successful challenger, Sen. Bernie Sanders (D-Vt.), all of which have revealed some of the party’s flaws and probably contributed to Clinton’s defeat in the 2016 presidential election. Now that they no longer control the presidency or Congress, Democrats will need to address voters’ concerns and make changes to meet the country’s changing landscape.

This past year, the reputation of the Democratic Party has been battered by multiple scandals. Clinton herself has been criticized for questionable behavior, especially her usage of a private email server. The Democratic National Committee (DNC), the governing body for the Democratic Party, came under fire when thousands of emails were leaked and published online, many of which involved committee members’ bad-mouthing the Sanders Campaign and even trying to undermine Sanders. These scandals have seriously damaged the reputation and trustworthiness of the Democratic Party establishment. The DNC should have remained neutral before the nominee was chosen because the entire party should get a say in who is nominated, not just the party’s elites.

The lack of trust between the Democratic Party and supporters might make it more difficult to gain the support needed to win elections. To regain that trust, Democratic officials will have to prove they really care about the opinions of everyday voters. In addition, the kind of elitism that led party officials to mock the Sanders campaign should not be tolerated because Democrats claim to champion progressive viewpoints, and ultimately, it is the voters who get to decide which person is fit to be president.

The success of Sanders’ campaign also exposed challenges to party unity within the Democratic Party. Many Democrats support very liberal ideas that Bernie Sanders represented, such as increased economic equality and labor rights. Sanders was able to mobilize young voters in a way no other primary candidate could. While young voters do not generally vote at the highest rates, if they are encouraged to vote and are represented by a party that reflects their ideologies, they could have the power to decide elections. According to The Atlantic, millennial voters may outnumber baby boomer voters in 2020. As these young progressives get older, it could cause the entire political landscape to shift to the left, which means Democrats need to make sure they are taking into account the concerns of progressives in any party initiatives.

Sanders’ supporters showed their disappointment with the Democratic Party when they protested at the Democratic National Convention in July. During the convention, thousands of people protested against Clinton. One group mentioned feeling betrayed by the Democratic Party, while others were concerned with corruption and racism. These protesters, many of whom declared support for Sanders, were not conservatives or right-wingers who would normally disagree with the Democratic Party’s position. Instead, they were people who hold progressive beliefs and could support Democrats if they felt their concerns were being addressed. If the party continues ignoring progressive voices, the subsequent divide could lead to progressive voters’ abandoning Democrats in search of third parties that might support their views, or just stop voting altogether.

Although Clinton did win the Democratic nomination, she still did not have the kind of support that Democrats want in their presidential nominee. Clinton is the second-most disliked major-party presidential nominee since 1980, behind only President-elect Donald Trump. Clinton might have lost many votes in this election that a more liked and trusted Democratic candidate could have won. She and other Democratic officials need to learn to be more transparent and honest with their intentions as a way to avoid scandals and have a better connection with voters.

Although there are some major flaws that the Democratic Party needs to address going forward, there are also many reasons to be optimistic about the party’s future. With an increasing number of young, liberal voters, the Democrats have an opportunity to embrace policy initiatives that are supported by this emerging group. Liberals have seen many victories in the past few years. The Affordable Care Act provided health care to the people who were most in need of medical treatment. The Obergefell v. Hodges Supreme Court decision ensured marriage was legal for everyone, regardless of gender or sexual orientation. If Democrats continue to stick to their values, as well as welcome even more progressive ideas, we can hope to see them regain power in the federal government and make meaningful changes in the coming years.

Emma Whitestone can be reached at ewhites2@ithaca.edu

Education policy should focus on helping failing schools improve so they can pass any standards and have graduates that are career and college ready.

When one is accustomed to privilege, equality feels like oppression.

How privilege and ignorance protect racism