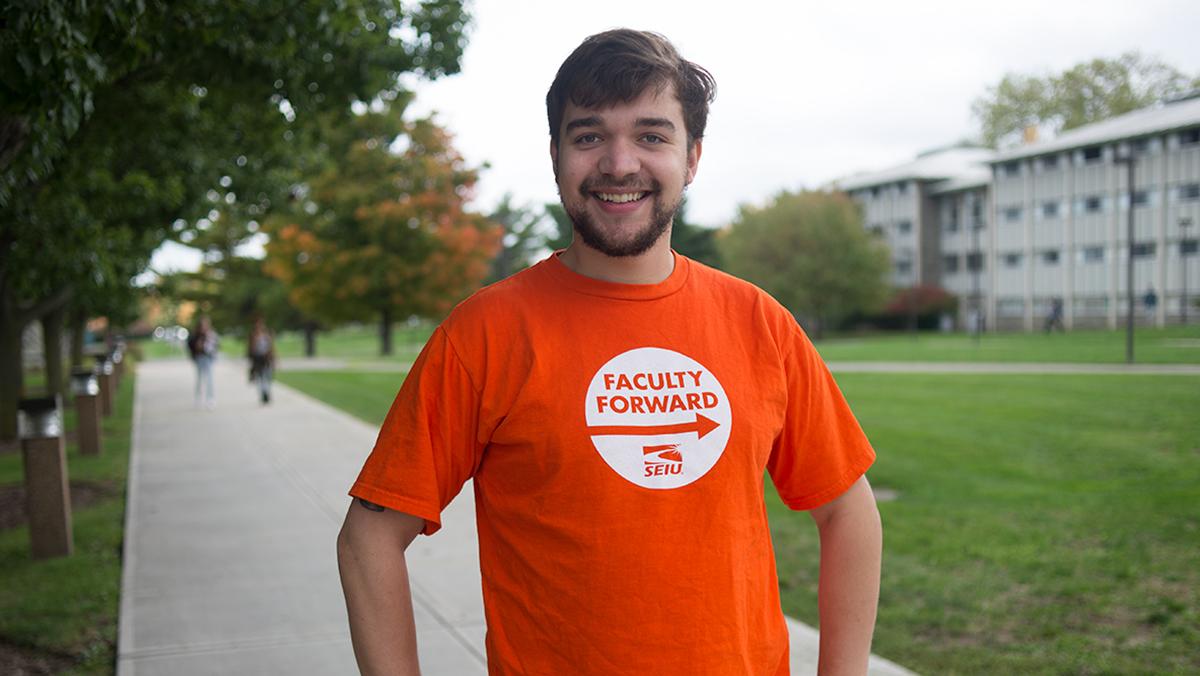 Fernando Ferraz/The Ithacan
Senior Taylor Ford is a member of Students for Labor Action at Ithaca College, which has held teach-ins in conjunction with part-time and contingent faculty to discuss their unionization efforts.
By Taylor Ford
Published: October 4, 2016

On Sept. 23, the part-time faculty bargaining committee walked out of negotiations with the administration of Ithaca College. They were representing all of the part-time professors of the college, who voted to unionize in order to address problems in their working conditions. Primary among these issues were how much they were paid, their job security and benefits. This walk-out came after the administration delivered a proposal on compensation. So what’s going on here?

First, let’s talk a little bit about the situation that exists now. At IC, part-time faculty are currently paid $4,200 for each three-credit course that they teach. They are limited to two per semester. This means that if they teach two classes a semester in both fall and spring, they will make less than $17,000. It’s true that these people are not teaching a full course-load, because full-time professors teach three courses instead of two. And some part-time professors also teach at other colleges, such as Tompkins Cortland Community College or Cortland. But, let’s say for example, that someone is teaching two courses here, and another at a different institution, which would be the full load. Assuming the other institution paid the same wage, they would still only make a total of $25,200 a year.

I don’t have to tell you that this is not a comfortable amount of money to live on, especially in Ithaca, and especially if you’re also supposed to be paying back student loans. Some of the professors who teach in these positions are actually graduates of the college themselves, who are now unable to pay the school back because of how little they are paid. This demonstrates the fundamentally unsustainable nature of the problem.

In the counterproposal that the administration delivered before the walk-out, they offered to increase the pay for a three credit course by less than $100, only two percent. This is, frankly, insulting. It does nothing to meaningfully address the problems faced by part-time professors.

As students, we should be angry at the administration for treating our professors this way. First and foremost, we must recognize that they are people, and deserve to be treated fairly for the work that they do and their contribution to this college. They deserve respect, and to be able to make a living for themselves here. However, there is also another powerful reason for us to reconsider the way that we treat our part-time faculty: our experience, as students.

Part-time faculty members can be great teachers, who are devoted to their jobs, but when we treat them as we do now, it infringes on their ability to do their job as effectively as they can. For example, part-timers work on semester-to-semester contracts, which means that they are never sure if they will be employed in just a few months. They must spend time applying to jobs during the end of the semester, so that if IC doesn’t sign them, they’ll be able to pay their rent and buy groceries. A professor who’s doing this has less time to interact with and help students than a professor with job security. It’s in the interest of both students and professors for them to be treated better.

If you haven’t heard about this issue before, you’re not alone. The differences in the ways that our teachers are treated are often concealed from students, who often don’t know how our professors are classified. But they affect your professors deeply, and, by extension, you. Nationally, one in four professors of this type are on food stamps, Medicaid, or another form of government assistance. How do you feel about the possibility that your professor is one of them?

On Tuesday, Oct. 11, Students for Labor Action and IC Progressives will be co-hosting the screening of a short documentary about the experiences of part-time faculty members here. It will be at 7 p.m. in Textor 101, with free pizza. Please join me in coming out to support your professors.

Taylor Ford is a member of IC Students for Labor Action.

Not unlike gay marriage rights, part-time faculty unions are sweeping the nation, as The Ithacan also reported March 5 in the article “Part-time faculty across nation move toward unions.”

Commentary: In support of unionization by part-time faculty