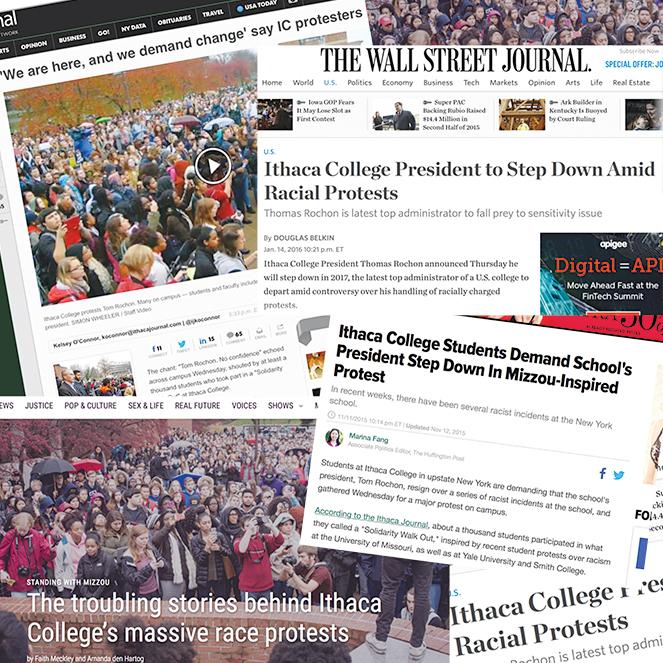 Since mid November, Ithaca College has been referenced in dozens of news reports by national media outlets, including The New York Times, The Wall Street Journal, Huffington Post, Democracy Now and The Atlantic. National coverage of the events ultimately leading to the retirement of President Tom Rochon have focused almost exclusively on the race-related aspects of the protests by students, typically painting those protests simply as students of color at Ithaca College getting caught up in the student unrest at The University of Missouri and other campuses across the country (e.g., a recent article in The Atlantic on Jan. 19, 2016). For those of us here at Ithaca College, we know that this is far from the case — the concerns expressed by both faculty and students have been long-standing and include many more issues than just the racial incidents that occurred this past fall. Even student concerns about the Blue Skies event on Oct. 8, 2015, went far beyond the egregious “savage” comments, as detailed in a letter written by SGA President Dominick Recckio the following day. Only one news outlet has consistently covered these events with depth, accuracy, and close attention to primary sources: The Ithacan.

In fact, The Ithacan has been covering concerns expressed by both the faculty and students for many years (e.g., protests about the college’s media policy which led to it being rescinded). In one of their first issues last fall (Sept. 3), The Ithacan reported on student protests of alleged racial aggression by campus safety. The Ithacan was also the first to break the story about concerns over the Blue Skies event, held on Oct. 8, in a story on October 12. Both of those stories were later cited in the first national news story about the situation at Ithaca College, written by Ithaca College student Sam Lisker for USA Today College on Nov. 8. Virtually all other news reports — including coverage by The Ithaca Journal (whose first story appeared on Nov. 11) and other local news media — got their information almost exclusively from The Ithacan.

And it’s a good thing they did. I have found The Ithacan’s coverage of the protests, no confidence votes, and other events leading up to President Rochon’s resignation to be thoughtful, nuanced, extensive and clearly aimed at providing a balanced viewpoint by including quotes from individual faculty members, students, leaders of SGA and Faculty Council, as well as from President Rochon, Board of Trustees President Thomas Grape and others. The photographs and video clips accompanying these stories — which have been included in many of the national press stories — have been outstanding. The Ithacan Editor-in-Chief Kira Maddox’s recent interview with President Rochon (which appeared online on Jan. 15 and in the Jan. 28 print edition) was tough but fair, asking really good questions and follow-ups. That coverage has helped the whole campus community understand these events with a broader perspective, which will help us as we create new policies and opportunities for dialogue during the coming year.

Unfortunately, the national press typically cited only the parts of The Ithacan stories that dealt with the race-related protests, ignoring the broader issues raised by both students and faculty. In the media literacy work I do through Project Look Sharp and in my courses here at Ithaca College, I stress the importance of getting news from more than one source. The fact that the national press relied so heavily on The Ithacan to do the investigating for them is both indicative of the state of journalism today and a tribute to the excellence of student journalism here at Ithaca College.

Cyndy Scheibe is a psychology professor and founder and executive director of Project Look Sharp, a media literacy initiative. Email her at scheibe@ithaca.edu.