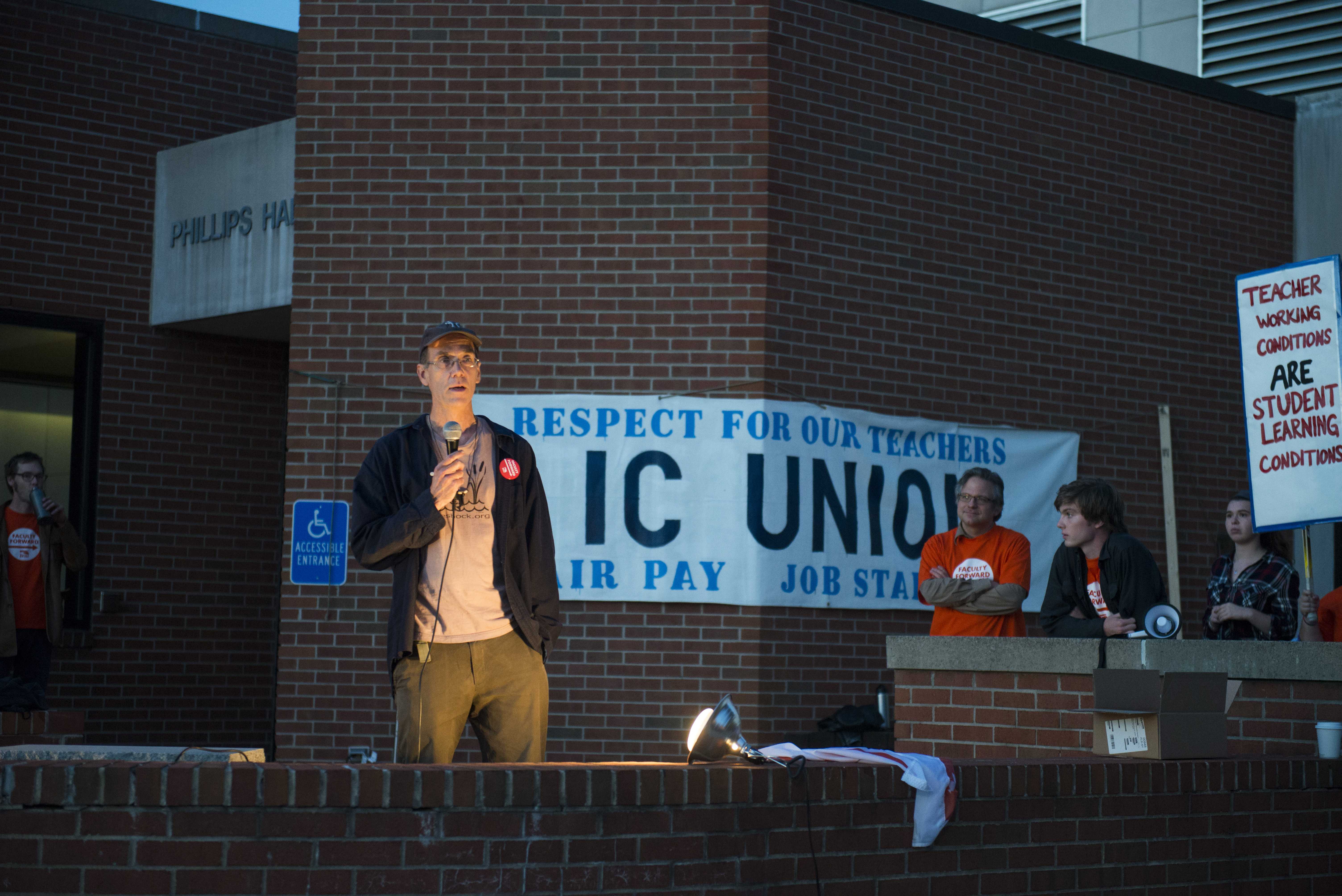 Sam Fuller/The Ithacan
Ithaca College lecturer John Burger speaks at a rally in support of the contingent faculty union Oct. 19 at the Free Speech Rock. The rally was organized by IC Students for Labor Action.
By Mark Baustian
Published: November 16, 2016

I’d like to comment on several issues that have arisen concerning Ithaca College’s negotiation with part-time contingent faculty. It is not surprising that an institution as reliant on underpaid workers as Ithaca College is resisting challenges to that business model. With no possible moral justification for the poverty-level wages earned by part-time faculty, the only recourse left is to make excuses.

In a quote attributed to Professor Swensen (The Ithacan, 9/23/16) the idea was put forward that other work part-time faculty are not doing explains the discrepancy in pay between part- and full-time contingent faculty. This meme has been taken up by the administration in its communication to the campus community (Intercom 10/19/16). For this to be true, the full-time faculty member would have to be doing all of this other work on top of teaching four three-credit courses per semester. But it is the case that if these types of activities consume a significant part of a faculty member’s time, they are either compensated directly or given a reduction in their base teaching load. I’ve been around higher education for over 30 years, and someone will have to show me the data to prove that the disparity in pay that the part time–faculty union is trying to close can be explained away by some other work that we are not asked to perform. It is also important for the community to understand that we are not seeking pay parity with, or comparing our jobs to, assistant, associate and full professors on tenure-eligible tracts, but with full-time faculty who in their majority, like us, are primarily responsible for the teaching of students.

The second point concerns VP and General Counsel Nancy Pringle’s assertion in The Ithacan that pay increases for part-time faculty would require raising tuition. When the 2016–17 budget was made public, I attended former VP of Finance and Administration Gerald Hector’s Dollars and $ense session on the 2016-17 budget and specifically asked how the college was going to handle the financial ramifications of the contract we are now trying to negotiate, given that there was no money allocated in that budget for pay increases for part-time contingent faculty. I was told point blank that when asked by the administration, that the budget office would find the money. When pressed as to where in the budget such money could be found, someone blurted out that there were contingency funds available. Contingency funds are in the budget to meet unexpected needs. They are unallocated and if VP Pringle believes they are earmarked in some way, this should be spelled out. The community needs to be able to compare those priorities of the administration to the fundamental fairness of paying the college’s teachers.

The point is that the part-time faculty members are paid a ridiculously low wage for the training, years of experience, and responsibilities they have, and it is time to put an end to it. In the long run, our request to be paid an equitable wage (without a significant benefits package and many of the other perks of full-time employment) will increase the value students receive for the tuition they pay. The increasing cost of higher education has repeatedly and clearly been shown to be the result of administrative bloat and irresponsible spending by administrators. Our demand for pay equity can be met without raising tuition.

The administration has a choice. They can put the educational mission of the college first, or they can try to drive a wedge between students and their teachers in order to maintain their privilege. The support shown by full-time faculty on all job tracks has been encouraging. Rather than stand by and watch their own job lines and privilege get nibbled away by the Walmartization of higher education, I urge all faculty to stand with their colleagues in support of fair pay.