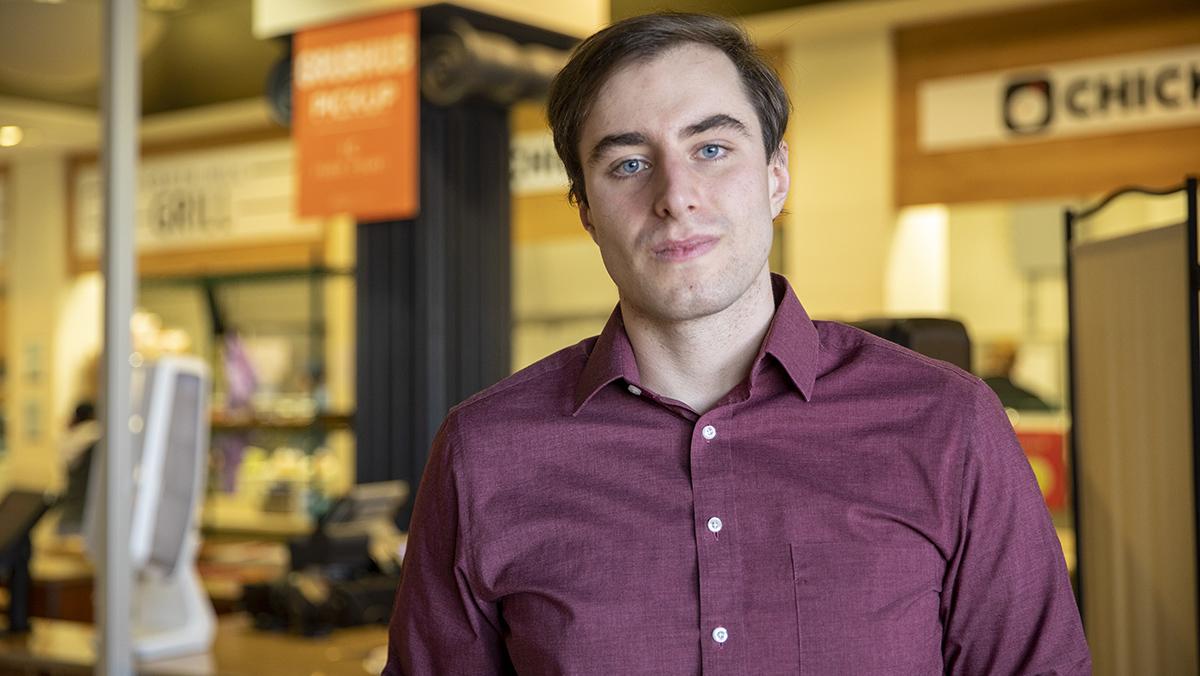 Kalysta Donaghy-Robinson/The Ithacan
Senior Jay Bradley reflects on the limited late night dining options. Nostalgic for what once was, he points out how students now struggle to find fresh food after 9 p.m. on campus.
By Jay Bradley
Published: April 15, 2022

I was walking out of jazz rehearsal on a Wednesday night at around 8:45 p.m. earlier this semester and, having had schoolwork and meetings throughout the afternoon, thought I would get food on campus to end the day. I had just finished a semester in London and live off campus, so when I checked the schedule, I was shocked. Other than running to Terrace Dining Hall at that moment for the 10 minutes it would remain open, there would be no way for me to get food anywhere on campus.

After 9 p.m. on most days, fresh food availability shuts down at Ithaca College.

The weekend offers some minor respite for on-campus students, with Towers Marketplace open from 5–10 p.m. Thursday to Sunday. That is, if they can get it. I have heard countless testimonials of people waiting upward of an hour, if not longer.

As a senior, it feels like I come from a different time in a lot of ways, be it the pandemic or otherwise, but few places has this been more visible than dining. In 2018, due to a similarly busy schedule to what I have now, I ate most dinners during late night hours at Terraces after club meetings for no extra charge through our meal plan. During late night study or game sessions, we were able to get retail dining with no issue. Now, if you don’t go off campus, you either eat early or hope you have leftovers.

After the college decided to bring dining services “in-house” and part ways with Sodexo, it also decided to cut back hours. Before this, Terraces was open until midnight Monday to Thursday, and Subconnection, the former retail option in Towers, offered snacks and sandwiches for Bomber (then Bonus) Bucks until 1 a.m. seven days a week. Towers did offer late night retail for a while, but that has since been cut back too. Whether it be staffing or resource challenges to blame for this, it still is a problem that cannot be ignored.

With things instead closing by 9 or 10 p.m., freshman students who have paid for the meal plan and largely do not have cars now have to schedule their on-campus involvement around the dining halls. If I had a busy day like the one that prompted me to notice this issue, I don’t know what I would have done.

Does the college expect students to use Grubhub off campus for everything after 9 p.m. when they had already paid for an already quite expensive full meal pass? Would they point to vending machines to be able to fill this void? To me, it seems the college is telling them, “Tough luck.”

I was able to get a full meal, absent time or additional financial pressures when I arrived here, which is no longer possible on this campus. The college is obligated to fix this for future students by making on-campus dining hall or retail food available during late night hours to ensure that the food operates on its students’ schedules, not the other way around.