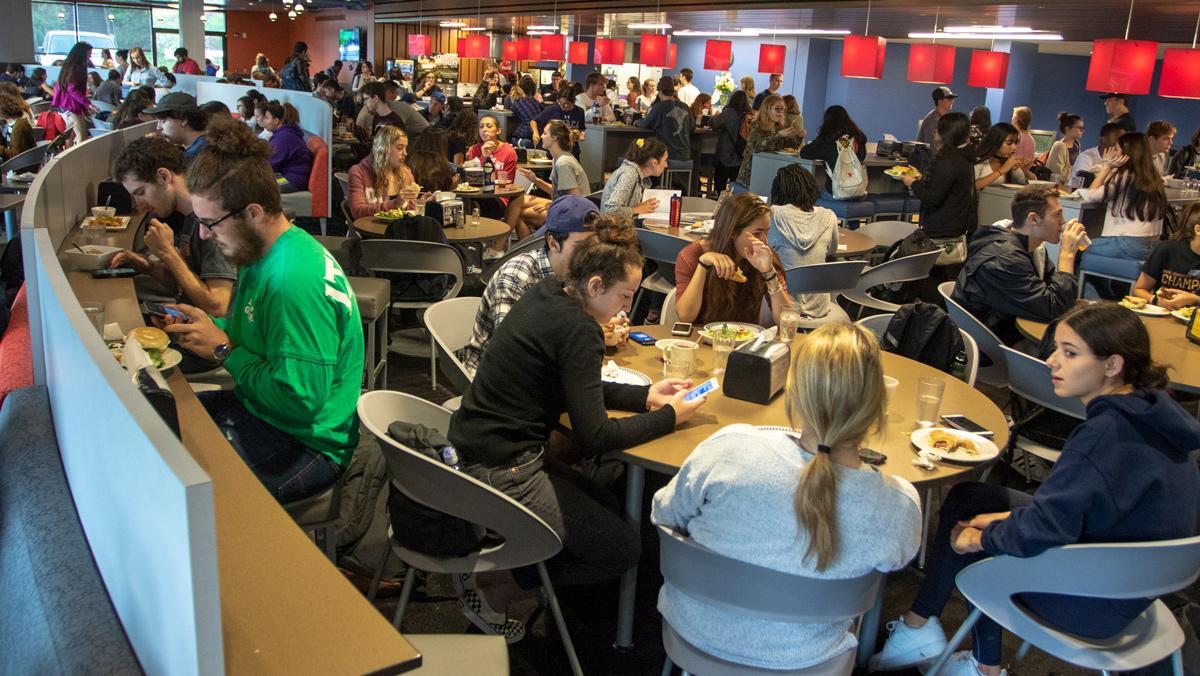 Elias Olsen/The Ithacan
The college announced March 18 that it will not renew its contract with Sodexo. The food provider has existed on campus for nearly 20 years and has faced frequent criticism from the campus community.
By Madison Fernandez — News Editor
Published: March 18, 2019

Ithaca College has decided not to renew its contract with Sodexo, the college’s widely criticized food provider.

The college has had a contract with Sodexo for nearly 20 years. During its time with the college, Sodexo has been subject to criticism on campus due to concerns about its food quality and its connections with private prisons. In its announcement, the college said that it will instead conduct its Dining Services “in house” and that the current contract with Sodexo will end June 3.

Last fall, parents circulated a petition calling on the college to review its dining practices after a student was served a moldy hamburger bun. The dining halls have also been criticized for cross contamination that has caused allergic reactions among students. The college held a forum March 4 for the campus community to express feedback about the dining services at the college, at which Bill Guerrero, vice president for finance and administration, said the college was considering transitioning away from Sodexo.

The college made the decision to end its contract with Sodexo on March 15 and made the announcement to the campus community March 18. Guerrero said he, Dave Prunty, executive director of auxiliary services, and President Shirley M. Collado were all involved in the decision.

Guerrero said the members of the food service staff were consulted about the change as well because the transition will be most impactful to them. There are currently approximately 125 Sodexo positions at the college, Guerrero said. The college is offering to keep Sodexo employees as employees at the college. If they choose to stay, they will become employees of the college and will receive benefits from the college. He said he anticipates that much of the staff will remain, but that it is ultimately up to each employee.

Jeff Scott, director of Dining Services, did not immediately respond to request for comment concerning whether or not he will remain at the college when the contract ends.

Guerrero said that while it would have been easier to switch to another food service provider, a self-operated system better suits the campus community.

“When you’re thinking about Ithaca and its unique nature, unique community, where you have places like Cornell, which is already self-operated, and when you think about all the local community members, what’s the best fit for here was a self-operated model,” Guerrero said. “Albeit it could be one of the harder steps, but I think it’s going to be the best opportunity for what the community deserves and wants.”

Guerrero said that although the college will no longer be working with Sodexo, many of the food vendors will remain the same. For instance, Sysco, a wholesale food distributor, will likely remain. Still, Guerrero said, he would like to move toward alternative providers that can supply the college with locally grown food. He said the college may also look into getting food from the supply chain Wegmans uses.

Guerrero said that specific changes to the dining program are not yet solidified, but that he is planning to find local partners to work with, like Ithaca Bakery, Gimme Coffee and Moosewood Restaurant. He said these changes would likely not be an additional cost because partnering with other brands does not add labor. Additionally, he said he does not anticipate that the employees’ wages will change.

According to the college’s 990 form for the fiscal year ending May 31, 2017, Sodexo received the highest compensation from the college, receiving $10,534,237. Guerrero also said he does not anticipate the change will cost the college additional money.

In a statement to IC News, Collado endorsed the decision, saying that the switch will give the college’s Dining Services more flexibility. Guerrero said chefs will not have to stick strictly to the program that Sodexo has set.

“Part of the training and development is training the staff but also being empowered to have, ‘Hey, I have a creative idea of what I can do for Tuesday night’s meal,’” he said. “Are you empowered to do that, or do you have to follow a Sodexo cycle?”

Guerrero also said he would like to create more student spaces, which would be similar to the cafes in the library and IC Square. Guerrero said a challenge in these spaces currently is the limited variety of food offered and the limited hours the locations are open. He said that while new areas will not necessarily be opened with this initial transition, he wants to improve the current spaces already on campus by changing the hours of operation and what is being served.

Guerrero began conducting a review of Sodexo in July 2018 to consider the cost and student satisfaction of the program. In a statement that was posted on IC News, Guerrero said the decision was made, in part, as a result of the feedback the college has received from students and parents.

In February, the Division of Finance and Administration sent a survey to the campus community asking its opinions of Dining Services and what improvements it would like to see. Guerrero said there were approximately 1,900 responses and provided insight on what community members both valued and disliked about Dining Services.

“The best takeaway was that most community members valued the staff,” he said. “They ranked them really high in customer service and caring for our students.”

Many respondents also raised concerns about how healthy and clean the food was, as well as accessibility to vegan and vegetarian options, issues that Guerrero said he plans to address.

Freshman Emily Altschuler said she is disappointed by the lack of variety in meal options under Sodexo’s contract and hopes that the new dining program moves away from heavily processed food.

“I love college, but that was a downside, having pretty bad food and not feeling well a lot of the time,” said. “I would hope that the new food is more locally sourced and is at least made sure it doesn’t have any contaminants or anything, and that there’s more options for different types of allergy needs.”

Freshman Jessica Ketterer said she hopes the new services will be representative of the local food scene.

“I think a lot of things will be more farm-to-table, because that’s how Ithaca is in general,” Ketterer said.

A new price for meal plans has not yet been determined. Guerrero said he wants to create a cheaper unlimited meal plan to address food insecurity at the college and to make the dining experience simpler and more affordable and accessible.

However, some students raised concerns about the proposed changes. Senior Katie Musci said that changing the food provider will not necessarily improve the quality of the food. She said she hopes the workers will be paid adequately, which will give them the incentive to provide good service to the campus community.

Guerrero said Sodexo has been supportive about the college transitioning to a self-operated dining system. He said the next steps will focus on conversations with current employees about whether or not they will continue to work at the college.

“On the edge of a strategic plan, this is definitely something that is very bold,” Guerrero said. “It’s definitely transformative for the community.”