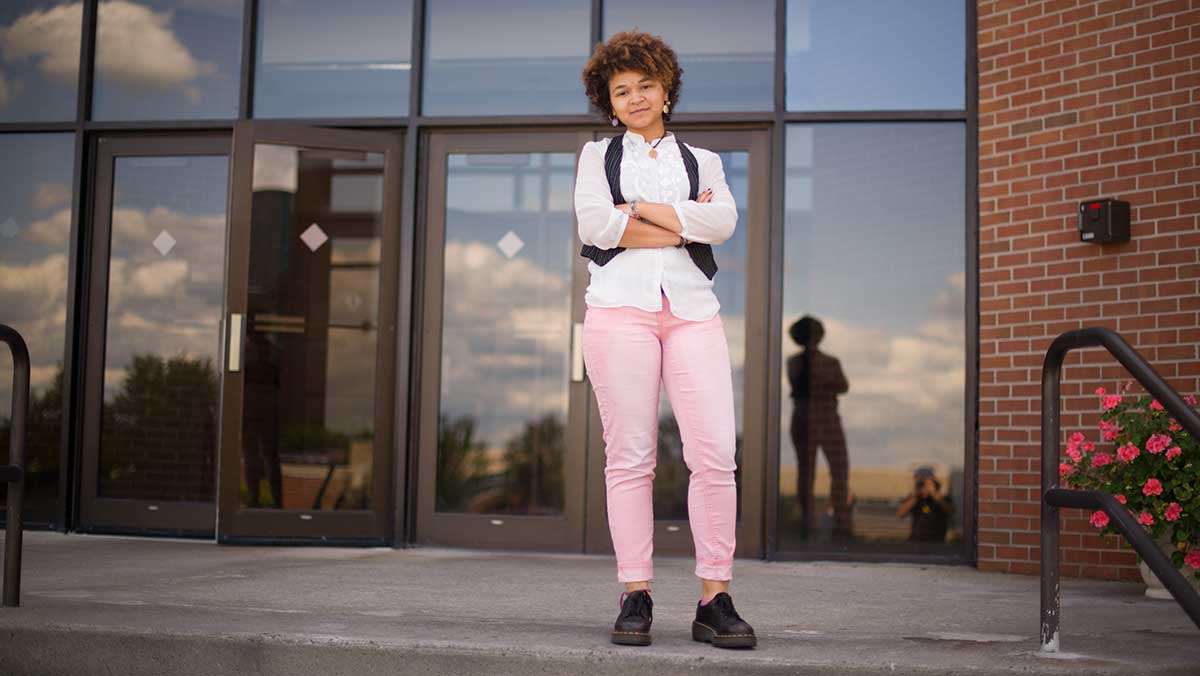 Tommy Battistelli/The Ithacan
Ithaca College freshman Marissa Booker volunteered with Jumpstart's Community Plunge on Aug. 20–22. Her original service project was to petition to raise the minimum wage in Tompkins County, but requested to change projects because it went against her values.
By Marissa Booker
Published: August 25, 2015

For many, freshman year didn’t start with classes at Ithaca College; it started with community service. I had signed up for one of the college’s pre-semester Jumpstart programs, Community Plunge, in which I was to go out into the Ithaca community and volunteer at various service organizations. I was ecstatic; my anxieties were high in this new environment, but that could be challenged and changed by way too many icebreakers and doing something I was used to: community service. On volunteermatch.org alone, there are 286 amazing opportunities in my home of Louisville, Kentucky — one for every religion, political party and interest. But I found myself surprised that the incoming freshman volunteers had no idea what service they signed up for.

This blind entrance into service can go many ways. Many people learned of opportunities they would’ve never thought existed, like internships at the Waldorf School and places of service that consisted of physical labor: weeding, digging holes, organizing, painting, gardening, cleaning, etc. But it was unsettling to find that my original placement was to aid the people of the Tompkins County Workers’ Center in garnering signatures for a petition I personally wouldn’t sign. I could go into the details of my opinions on changing the minimum wage in Tompkins County, but that would be the lesser lesson.

As freshmen, we’re told to get engaged, be active in our community and that great success will come unto us, but why was there no option to know the volunteer sites ahead of time so we could do our research, especially if some of the work to be done was political? It is understood that there is almost no avoiding religion and politics when volunteering since many nonprofits operate around faith or political theory, but there is a difference between pulling weeds at a local school and pushing a petition door-to-door, at bus stops and in stuffed letters. We should be encouraged to do work that challenges us but not work that goes against our views, and due to the chaotic nature that is entering college, many freshmen lacked the agency to speak their mind in this situation.

If students had the option of choosing their site, this would be a different experience. Students would be informed and wouldn’t feel so obligated. Even during the closing skits, students were admitting that they couldn’t describe the details of the petition when people would ask them about it, which is disheartening because people should volunteer because they want to make a difference that reflects their hopes and their ideals, not just because their college had a program that would help them make friends.

In 2013, just over 25 percent of America’s 16-and-older population volunteered at least once because, as they say, “America runs on volunteers,” but this gets tricky and is only growing more complicated when young volunteers are pushed to do service for service’s sake. This is not to say that the people behind Community Plunge don’t genuinely want all of the Community Plungers to go out and do something they care about or that the goal of lessening the anxieties of freshman year weren’t met, but putting freshmen in the position of aiding a political action without their prior consent shouldn’t be part of the process.

In a perfect world, we would all have the perfect organization to help out, and socializing would be way simpler, but I know that’s not the case. So what we can do is empower students at the college and elsewhere to pursue their passions — not passively move through actions — because that’s where strong relationships are forged and positive change is created.

Marissa Booker is a freshman communication management and design major. Email her at mbooker@ithaca.edu.