Commentary: Why tenure is an institutional value 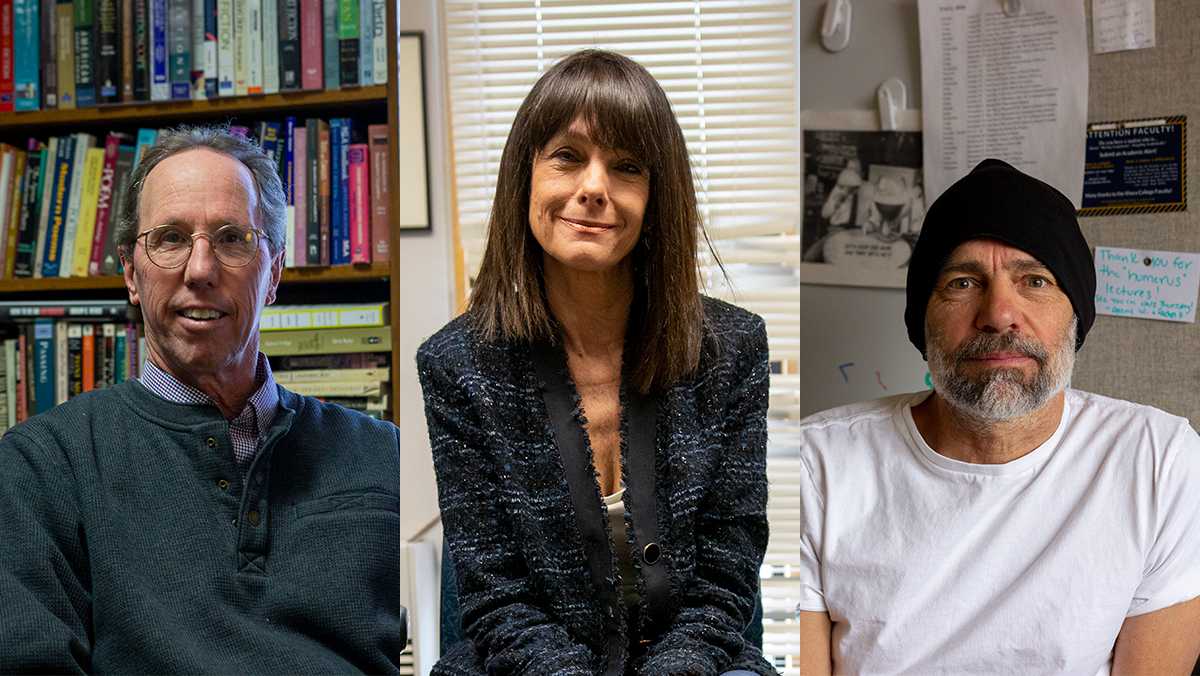 Ash Bailot and Mikayla Elwell/The Ithacan
From left to right, Ithaca College professors Hugh Egan, Claire Gleitman and Tom Swenson are among the 11 faculty members discussing the value of tenure.
By The Ithacan
Published: March 16, 2021

We write to respond to claims made by President Collado and Provost Cornish in the national press in recent weeks. Speaking in Inside Higher Ed, they remark:

“The [Faculty Handbook] … outlines the order in which faculty positions should be eliminated, a process that protects the most privileged in the academy: our tenured and tenure-eligible faculty. While we are committed to tenure …, the rules guiding the elimination of faculty positions mean that … the college will lose some wonderful academics due solely to their status as non-tenure-eligible faculty. We hope … this reality will invite a conversation among faculty about … whether they wish to continue to privilege tenure and tenure-eligible status moving forward.”

Questioned in the Chronicle of Higher Education about these remarks, Provost Cornish stated, “We are not suggesting … tenure be dismantled. What we are saying is that tenure is a power structure. … It is a caste system.” But these claims are difficult to reconcile. A “caste system,” as Isabel Wilkerson loosely defines the term in her 2020 book “Caste,” is “an artificial hierarchy,” one that a person is “born into.” If tenure operated in this fashion, then surely one should seek to dismantle it.

But tenure is not unearned, like other forms of privilege rightly excoriated in our culture. It is achieved, through years of hard work and rigorous assessment. Once achieved, tenured professors are not transported to highly paid sinecures. Indeed, one of many arguments for tenure, not just in higher education but also for elementary and secondary school teachers, is the economic security it provides, drawing people to these professions who might earn more in other fields. Tenured faculty typically continue to teach, pursue scholarship and serve the institution with undiminished dedication.

As we watch our community reeling from the current cuts, and as we grieve the loss of cherished colleagues who are losing their jobs purely because they happen to be in non-tenure-eligible positions, we should be all the more invested in unambiguously defending tenure as a cherished institutional value. Tenure grants not just a reliable livelihood — no small thing, and not only in a pandemic. It undergirds academic freedom and a system of shared governance in which faculty can challenge status quo assumptions and engage in open discourse with administrators who in other ways have more power than they do. Tenure is the laudable quality that distinguishes the American university system from many others around the world.

None of this is to deny that it is fundamentally inequitable — indeed, at times entirely haphazard  — that some people receive tenure-eligible positions while others, equally qualified, do not. But those decisions, generally speaking, are not within faculty control. It is the administration that determines what lines are made available to departments, and thus the suggestion that faculty are instrumental in maintaining these hierarchies is misleading. Departments will almost always request tenure-eligible hires (with exceptions in certain highly specialized areas, such as with some clinical faculty), but it is up to the administration to determine whether to grant them.

There are pervasive structural inequities in our society, to be sure, that render the path to tenure inaccessible to many. Racial, gendered and class-based biases have, historically, resulted in fewer women, Black, Indigenous, people of color and differently abled people entering the professoriate. Here, faculty — who are centrally involved in determining who is hired and later tenured once lines are granted — have clear accountability. Our current administration has done admirable work in making bias training a regular component of our hiring and evaluation processes. To that same end, the appropriate response to systemic inequities is to broaden tenure and the protections it affords to larger numbers of people. That is within the power of college administrators.

It is reassuring to hear Provost Cornish and President Collado state that they do not oppose tenure. But the language they have used in two public venues has appeared to undercut that claim, arousing legitimate concern. Comparing tenure to a caste system does not facilitate the vital conversations we need to be having about extending tenure’s reach, so as to decrease job insecurity in an increasingly embattled higher education climate. Instead of questioning whether faculty should continue to privilege tenure-eligible status, we should make full-throated arguments for widening its embrace.

Commentary: A Farewell to Ithaca College after 18 years