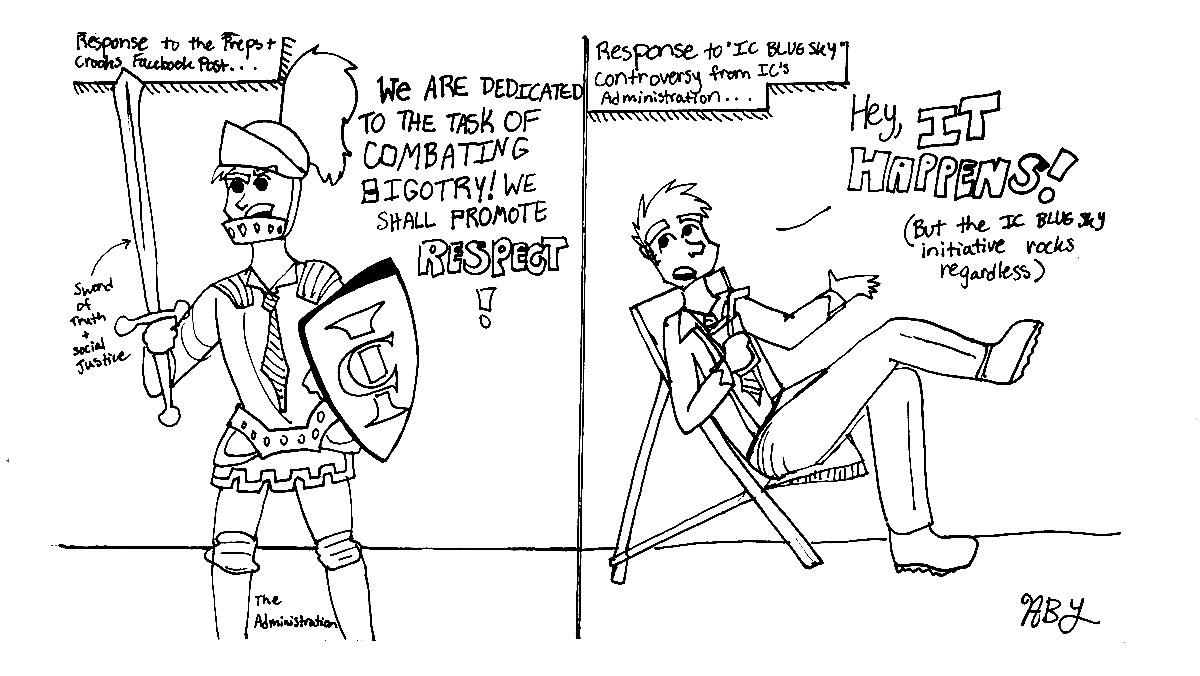 During the past two weeks, the Ithaca College administration showed that a “dedication to combating bigotry” only counts when the college does not directly have to deal with the consequences.

When a group of students used racial stereotypes to describe a fraternity party’s theme, the administration wasted no time issuing a statement, saying, “The posting used language that was reprehensible for its racial and class stereotyping” and that it was “antithetical to the college’s commitment to respect and inclusivity.” Its condemnation of the “destructive impact” of the message came the same day the controversy arose, as the administration took an immediate stance — thereby distancing itself from the group — and claimed to remain “dedicated to the task of combating bigotry and promoting inclusivity and mutual respect.”

Unfortunately, when it was time for the administration to critique itself, it failed to hold itself accountable. The commitment and tone of severity used to address students was absent from the college’s response to the comments made by a white alumnus to an African-American alumna at the Blue Sky kickoff event.

After the alumna stated that she had a “savage hunger” to be successful in her career, a white alumnus proceeded to refer to her as a “savage” at several points during the remainder of the event, with a second alumnus joining in to use the term later. The administration made no mention of the incident in its “thank you” post the day after the event, only addressing it four days later after receiving an open letter from the Student Government Association, being contacted by several upset faculty members and The Ithacan’s inquiry into the incident.

In that response, the administration characterized the remarks merely as “insensitive comments,” essentially brushing them off as microaggressions at best.

But calling an African-American woman a savage isn’t a microaggression. It’s racism.

The fact that a spokesperson for the alumnus who repeatedly used the term later said he “did not intend to be insensitive” doesn’t mitigate that in the least. That the college was quick to condemn the AEPi announcement — in which it had nothing at stake — as “reprehensible for its racial and class stereotyping,” while characterizing what was said by a wealthy alumnus at its own event as simply “insensitive comments” speaks for itself.

The dedication to combating bigotry was absent from the administration’s Blue Sky response, replaced with an undeserved sense of helplessness through phrases like “we can’t promise that the college will never host a speaker who could say something racist, homophobic, misogynistic, or otherwise disrespectful” and “the college cannot prevent the use of hurtful language on campus.”

If the administration “can’t prevent the use of hurtful language on campus,” and fails to take any concrete action when it does happen, it shows that its official statements and claims of commitment do not actually mean much. They are only words written to appease the campus community while the administration continues to do nothing and refrains from “combating” anything.

This idea also shows a lack of leadership and, in general, is false. Many members of the college community could have prevented this use of racist language. The administrators who stood by silently while one of their bright and talented alumni was repeatedly referred to as a savage in front of a college audience could — and certainly should — have intervened and prevented it from continuing. The failure to do so was nothing short of moral cowardice.

Adding more diversity training workshops is not the solution. Ithaca College had diversity training in many areas of campus already, including among faculty and Public Safety officers, but it has not helped. Unless we can change the climate at the college to ensure these trainings and workshops are taken more seriously, they are useless.

Ithaca College students held a protest at Free Speech Rock the afternoon of Oct. 21. In addition to shouting “Tom Rochon, no confidence” to the campus community and attending members of the Board of Trustees, they said “No more dialogue, we want action.” And they were right. The college has always hidden behind formal committees and task forces, claiming that’s how change happens. But change only happens if the issues are handled with the level of immediacy they deserve. They haven’t been. The increase in protest movements and demands by students of color on this campus shows that. It shows that action is not being taken quickly enough. It shows that things are getting worse. It shows that the administration needs to take this seriously, take responsibility and take real action to make this an inclusive environment.

It’s time for President Tom Rochon to show real leadership and meet with students directly, going to them in their spaces instead of constantly inviting select students to his and asking them to speak on behalf of a larger group. He should listen to what they have to say and work with them in a real way to change this campus. The community isn’t waiting any longer.

Message to Campus Community on Racial and Class Stereotyping

Our Continued Work on Inclusivity and Respect at Ithaca College