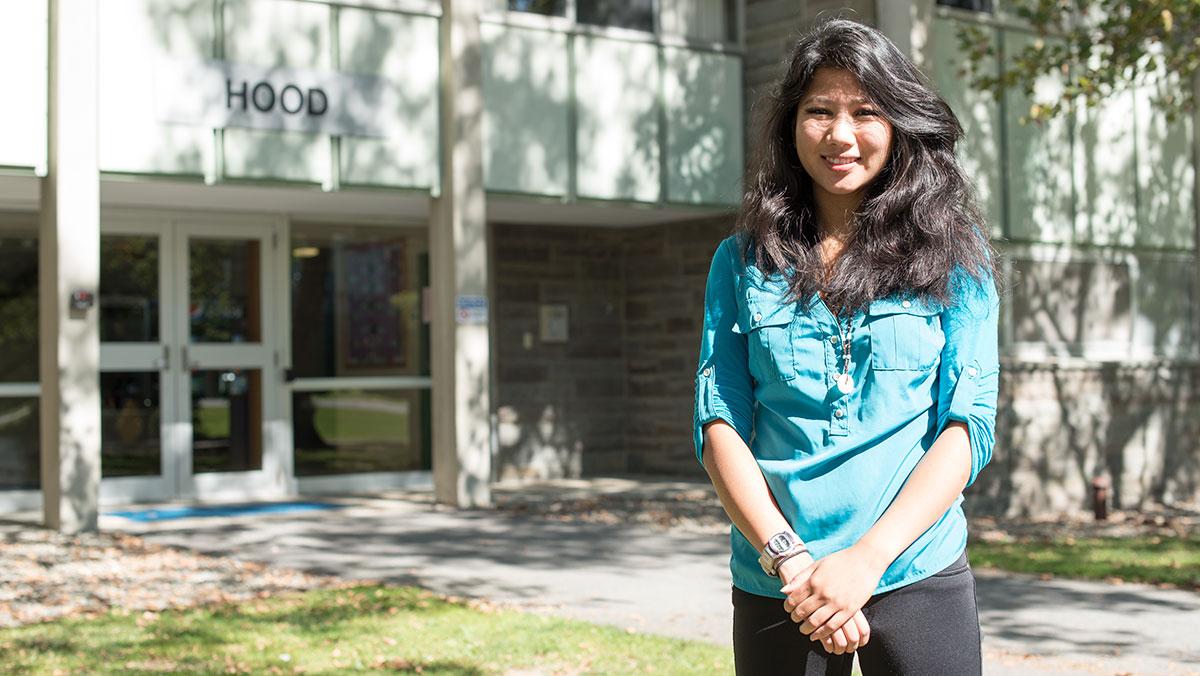 Amanda Den Hartog/The Ithacan
Junior Menalie Hyde was selected to be the Residence Hall Association representative to the recently created Council on Diversity and Inclusion, which is intended to address diversity and racial bias issues on campus.
By Natalie Shanklin — Opinion Editor
Published: September 23, 2015

In response to discussions about diversity issues and racial bias on campus, the college has set up the Council on Diversity and Inclusion, which consists of administrative representatives, the president of the Student Government Association and a representative from the resident assistant community. Junior Menalie Hyde was selected as the RA representative for the council.

Opinion Editor Natalie Shanklin spoke with Hyde to discuss her thoughts on the council, the alleged racial bias issue within the Office of Public Safety and other diversity issues on campus.

Natalie Shanklin: How did you end up getting selected to be on this council?

Menalie Hyde: The director of [the Office of] Residential Life, Bonnie Prunty, had sent out an email asking people if they were interested, and I had been interested as an RA, but I’m also in another club, Residence Hall Association, so they needed a representative of Residence Hall Association to be on the diversity council. So at first I was nervous because I already have a lot, but then diversity is important to me, so I decided that I wanted to do it.

NS: What do you hope to see the council do this year?

MH: I … hope that the council promotes and encourages a more diverse community in the college in general because there’s certain microaggressions and stuff that are offensive that people might not realize are offensive, so bring that to light. And I know one of the people who spoke at one of the meetings was talking about how someone called her resident a “fucking black bitch” and so just trying to cancel out that language. But mostly I hope the council deals more with upper management and diversity and inclusion up there, specifically regarding up there. Like the last few meetings that we had didn’t seem like they went anywhere, and I’m not even sure this will, I just wanted to try, and I hope that they’ll have more of an impact than the other few talks that we had.

NS: What are your opinions on diversity on this campus?

MH: I think the school does a lot to try to promote diversity, but it’s not necessarily there, so they have their [African, Latino, Asian and Native American] dinners and whatnot. The school tries but, in Residential Life at least, we get diversity training and there’s diversity programs that we have to attend. There’s just a lot of diversity requirements in Residential Life and knowledge and whatnot, but I feel like that’s not translated to other areas on the campus.

NS: What is your relationship to the RA-Public Safety racial bias issue?

MH: It’s not really taking sides, but I strongly believe that Public Safety should be more transparent, and I think that certain incidents that happened on this campus are absolutely unacceptable for a college campus. Being on the council, I hope in the future that maybe this council will have an impact on the way that Public Safety officers interact with the students, but again, the last few meetings that we had have been just with upper management, and it’s not the people on the ground doing it, so it’s like, how are they going to feel what was felt in the room if they’re not even in the room when we’re discussing these sort of things? This campus definitely needs to change.

NS: What have been your personal experiences with diversity at Ithaca College?