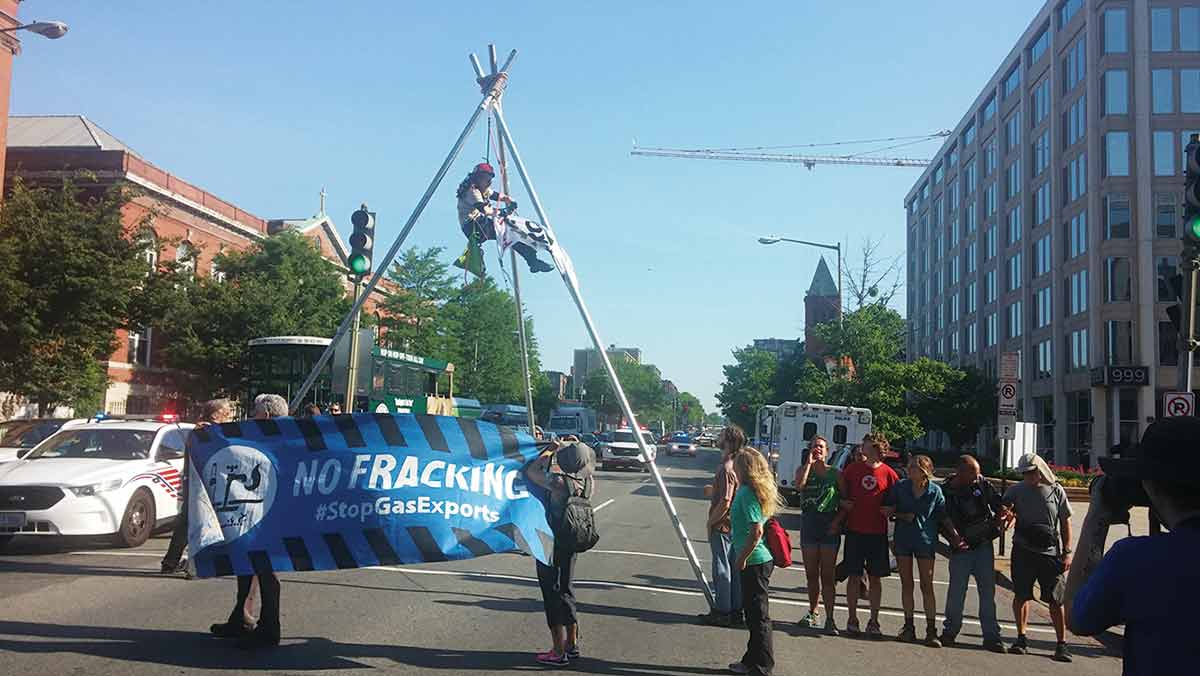 FAITH MECKLEY/THE ITHACAN
Junior Joshua Enderle (pictured on the right in the red shirt) participated in a blockade in the middle of Washington, D.C., traffic May 26 to protest the Federal Energy Regulatory Commission and the projects it funds.
By Natalie Shanklin — Opinion Editor
Published: September 9, 2015

For almost a year, protesters have been blockading driveways to stop gas company Crestwood Midstream from storing natural gas in the Seneca Lake salt mines. These activists are part of We Are Seneca Lake, a group that aims to protect Seneca Lake, which was mined of its salt underneath, forming caverns. The protesters want to stop the Crestwood Midstream project because the natural gas they store in these caverns makes them more unstable.

Some members of the activist group are Ithaca College students, including junior Joshua Enderle, who was arrested Aug. 4 for trespassing while participating in the blockade. Opinion Editor Natalie Shanklin spoke with Enderle about his involvement in the environmental movement. 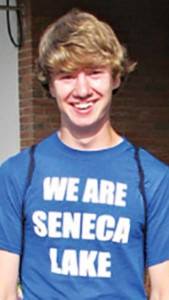 Joshua Enderle is a junior at Ithaca College.

Natalie Shanklin: What personal connection do you have to the Seneca Lake issue?

Joshua Enderle: … I have a connection in that I’m aware of what’s happening. State-speaking, that’s a big source of income for the state — tourism, for sure, and if anything were to happen to that, the economy would plummet, and it would take a hit, and it would be very noticeable. For one, we don’t want that to happen, but two, the environmental aspect as well, because you have to take both into consideration.

NS: How did getting arrested affect you in the movement?

JE: I did it mostly to get the word out, just to make it more of a prominent topic to discuss. I mean … once you stop traffic in D.C., it doesn’t compare as much. I was not scared one bit.

NS: What would you like to see other people in the community to do for this movement?

JE: I just want them to be aware of what’s happening. I encourage students or other individuals that are interested to learn more. If they want to participate, [they should] learn ways that they could. They don’t have to get arrested or anything like that. They can be on the support team and just tweet, and retweet, and repost things from We Are Seneca Lake. They can just read up on what’s happening in the world.

NS: What environmental movements have you been a part of in the past?

JE: In the past, very recent past, I went along with two people — we drove down to Washington, D.C., to be with Beyond Extreme Energy, and we did actions at the Federal Energy Regulatory Commission. And the commission — what they do is they approve projects, such as Crestwood Midstream, and every time, they get funding by approving projects, so they have a very low rejection rate … I think they rejected one project in the entire history. And we spent a week there protesting and whatnot — we put a tripod in the middle of traffic. … We put it in an intersection in D.C. to stop traffic and to bring attention. And then what we did was called FERCCUPY, which is like “Occupy,” but we did it in front of FERC out on the sidewalk in front of the FERC building. We got to meet and talk to a lot of passersby about the issue and how we feel about it.

NS: As far environmentalism in Ithaca goes, what other changes would you like to see happen?

Divestment would be a very cool thing. I’m part of the environmental society on campus. We haven’t met quite yet, but I have a lot of ideas I want to bring to the table, and see what other people want to do as well, and one of those is divestment from fossil fuels, and anything else we can do. …

Energy reduction, food waste reduction, trash in general. I worked over the summer for the Office of Energy Management and Sustainability, which is with Mark Darling, who is the sustainability coordinator on campus. And I calculated how much trash we throw away. So last year, every day during the school year, we threw out 2.3 tons of trash — 2.3 tons every day. That’s like two mini-coopers. It’s quite a bit. So I’d like to just get people aware of that and also encourage reducing and reusing what has already been used.

Driving less, taking the TCAT, get the Carshare back on campus. I’m trying to sign up for that right now. Ithaca Carshare is its own entity — it’s a business itself, and they have cars throughout the city with the logo on it. … You go on the app or you go online and you set a time that you’re going to need a car for … and then you have the car and then you can unlock it, start it for that time, and then you pay for what you use it for.

Learning how to compost. … I worked last semester — I was helping people compost and recycle appropriately during volunteer hours — and we just need to get more awareness out about what can be compost, what is compost.

I’d love to bring back [the sustainability residential learning community]. Mark Darling and I were throwing around the idea like what if we took a Circle Apartment and made that the sustainability house, so we could retrofit so you would do more sustainability-wise, so you can see how much you use, electricity- and gas-wise.

NS: How do you feel about sustainability on this campus?