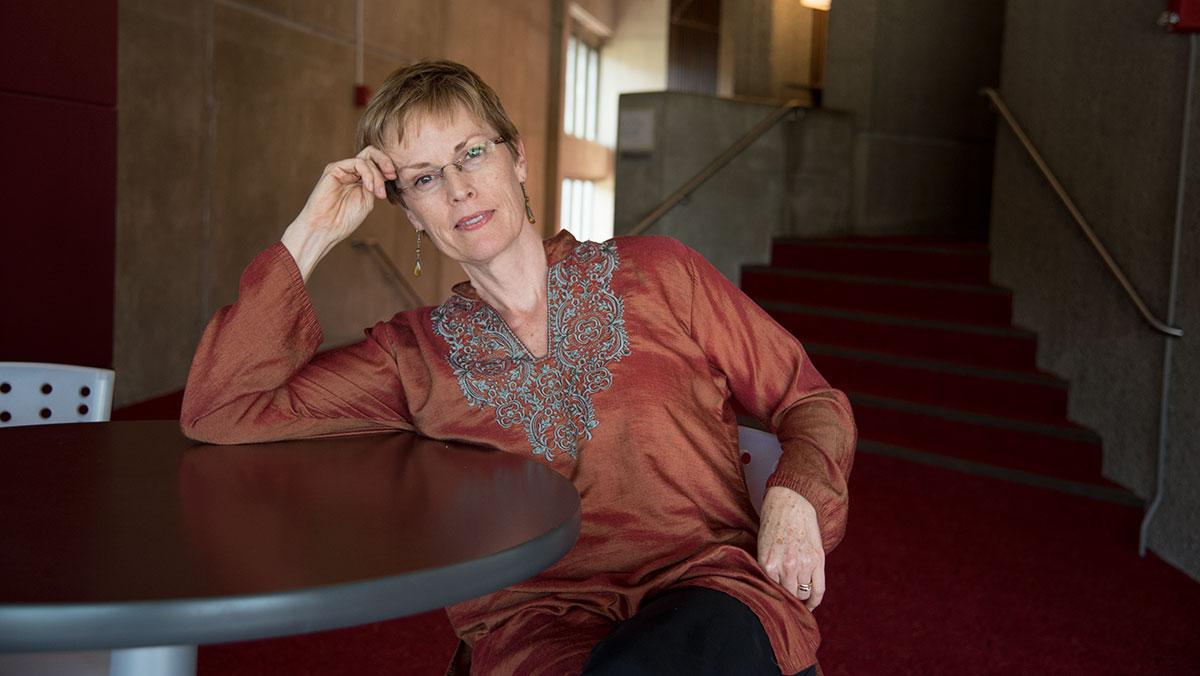 Jennifer Williams/The Ithacan
Kathleen Mulligan, associate professor in the theater department, has been working with Theatre Wallay to develop a play about the 1947 Partition between India and Pakistan. She hosted a screening of her documentary on the "Voices of Partition" project Oct. 2.
By Maura Aleardi — Staff Writer
Published: October 7, 2015

Kathleen Mulligan, associate professor in the Department of Theatre Arts, held a screening of her documentary, “Voices of Partition,” Oct. 2 in the Roy H. Park Hall Auditorium. The film featured the Voices of Partition project she’s been working on with the Theatre Wallay in Islamabad, Pakistan.

The five-step project highlights the stories of survivors of the Partition in 1947, when India was split and one section became Pakistan. The first stage included workshops for the actors at Theatre Wallay, where they studied survivors’ stories, then wrote and performed monologues. The next two steps involved the actors traveling to universities and collecting stories, then creating a script. The last two steps are performances of the play “Dagh Dagh Ujala” — “This Stained Dawn” — in both Pakistan and the U.S.

Staff Writer Maura Aleardi spoke with Mulligan about her work with the Theatre Wallay, the creation of the Voices of Partition project and the making of the documentary.

Maura Aleardi: What parts of the project does the documentary focus on?

Kathleen Mulligan: It focuses on the whole project talking about the history of the idea of it and then taking us through the interviews with the survivors of Partition to us developing the script and rehearsing and then producing it.

MA: Where did the idea for Voices of Partition come from?

KM: I do a project here called Ancestral Voices with my seniors, and that’s where students here at Ithaca College interview their family members about their family history, and then they create a monologue out of it and they have to do the dialect work. So when I was in Pakistan and started hearing about Partition and realizing how little I knew about it, and realizing also that the people that are still alive that are survivors are in their 80s and 90s and if we didn’t collect those stories quick they were going to be gone. And I’m certainly not the only person that’s figured that out. There’s a lot of efforts in the world right now to get these stories recorded. I thought, “Well why don’t I take the Ancestral Voices model and use it for interviewing survivors of Partition?”

MA: What made you want to use theater as your medium?

KM: Mostly because I’m a theater person. To be honest, my original idea would be that it would just be a series of monologues. Then, you get together with other people and people start dreaming and we started going, “Well why don’t we do a play?” I wanted my husband, who is a fellow Fulbrighter, to direct it, and he wanted it to be a little more of a production.

MA: Where did the idea for the film come from?

KM: It was actually the U.S. government. I can’t really remember whether they said, “How about a documentary film,” or if we, meaning the theater artists, said, “Let’s have a documentary film as part of it.” I want to say that somebody in the embassy thought that would be a good part of it, but I’m not certain about that. There was so much conversation going back and forth. Originally, we were going to do a book too, and we’d still love to do that, just with the monologues and photographs or the survivors, but we’d have to get more money to do that.

MA: Once you decided to make the film, what went into getting it started?

KM: I didn’t have to do that much. This filmmaker gave us a very detailed budget. Ali, who’s the filmmaker, is a guy that’s got all kinds of ideas. If you looked up enthusiasm in the encyclopedia, you’d see Ali. A lot of the time it was just, “Well Ali, you know, I know you want to film that, but I have to make the primary objective of this the workshop.” Really negotiating with him when his film crew could be there, how they could get what they needed while we still did what was our primary project, which was creating the theater piece.

MA: How did you get involved with the Theatre Wallay?

KM: My husband and I met one of the cultural attaches to the embassy in Islamabad. When I came to him with the idea for this project, he said, “I think you should meet the people from Theatre Wallay.” I had met a few of them already in other contexts in Islamabad, but he set up the meeting with Fizza Hasan, who’s the artistic director, and Safeer U. Khan, who is also a very powerful force in it. We met them at a coffeeshop in Islamabad and I was sort of nervous because I thought, “Who am I as an American that has really no connection to Pakistan, other than falling in love with it in the last few years, to decide to do this project?” I started awkwardly talking about it and Fizza started nodding and she said, “This is exactly the kind of project I’ve been wanting to do.”

MA: What do you want the viewers of the film to take away from it?

KM: What I’d really love is for them to get excited about coming to see the play, to spark their interest about learning more about Partition and also learning more about Pakistan. We kind of have this image I think because of our media. The only time we see something about Pakistan is when something terrible happens. Partition was a pretty painful period in history, but it’s also getting to hear stories of just everyday people and realize how much we’re alike. That’s my main goal.

MA: Was there any one moment throughout filming or working on the project that really stands out to you?


KM: There’s a shot in the film and, to tell you the truth, I can’t remember what the story was. I think I blocked it out. We heard some pretty rough stuff. Also, some stories of incredible kindness between Muslims and Sikhs, and Muslims and Hindus. There’s a shot in the film of me listening to a story that one of the company members is recounting about an interview and I’m crying, but I don’t remember what that story was. There were a few things that were just too horrible to talk about, but also really beautiful stuff. There’s a survivor who talks about that his father sheltered something like 15 Hindus in his house when a mob was attacking. The mob came to the door and said, “We think you’re harboring Hindus,” and he said, “How can you think that I would do that?” and made some joke about, “Where do you think I’m hiding them, in my pocket?” Meanwhile, he saved his neighbors’ lives.