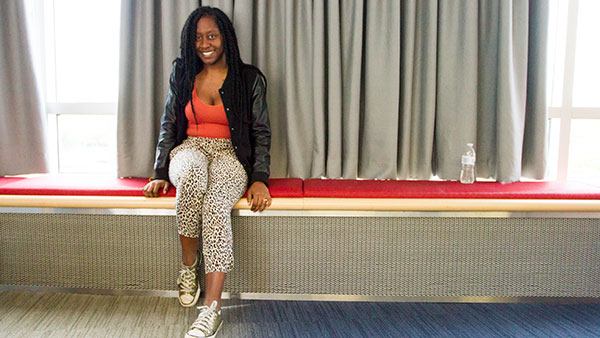 It isn’t fun when you have to leave home because you cannot afford it anymore. The moment you stop recognizing the people around you always makes the place you call “home” feel unfamiliar.

Things started to take a turn. I became aware of an “invasion” after watching a video in junior high of a white woman who disguised her voice, but video recorded my neighborhood asking other white people to take advantage of the “stupid” residents and the cheap rent. Not too long after, I noticed the houses that looked run down for years, but still had faithful inhabitants, began to go under repair. There was more effort for our neighborhood to seem appealing. More white people moved across the street. My friends moved away one by one. Condominiums were quickly built. We became neighbors with coffee shops and art galleries. More murals went up.

When community stores close and change into art galleries, that’s when you know you’ve lost — for real. Things only got “better” when more white people decided to move into Bushwick, Brooklyn. No one really cared about us here before. We just dealt with it. We created a culture. We created a community among ourselves, and we were proud of it. Home stopped being home, and it took us by surprise.

My home didn’t have the right image. We needed rebranding. So Ligaya Mishan, a writer for the New York Times, called home “Quooklyn” because Bushwick is right on the borderline of Brooklyn and Queens, and now all the natives of the area are uncomfortable with an outsider’s attempt to redefine, relabel and “sell” our neighborhood. The Avenue of Puerto Rico has been a topic of hot debates since there are people who feel that it doesn’t make a good enough appeal to those who can’t identify.

“It’s becoming a very hot area, and the people from Williamsburg are moving further out, and they don’t want it to be known as a Puerto Rican or Spanish area anymore,” according to Michael Schlegel, a Brooklyn-based developer. “I think it would help the image of the area.”

People from Williamsburg, people from an area of Brooklyn that’s becoming more and more gentrified, suddenly don’t want to be associated with another culture while ironically attempting to “diversify” their inner-city urban experience. White gentrifiers want “Sex in the City.” My culture is too much for them. Participating in a Puerto Rican community and learning the history behind the people that have always lived in the area is such a difficult a task that it has to change for those who can’t understand it. Gentrifiers want the authenticity of “exoticness” when it comes in a sushi roll or street cart empanada. Gentrification does not want me, personally. Things will only get better as it continues to make its upward aspiration of becoming the East Williamsburg or Mini-Manhattan no one native in Bushwick ever really asked for.

Spike Lee said it best: “I mean, they just move in the neighborhood. You just can’t come in the neighborhood. I’m for democracy and letting everybody live, but you gotta have some respect. You can’t just come in when people have a culture that’s been laid down for generations and you come in and now s— gotta change because you’re here?”

Suddenly there’s a need to change because the investment in whiteness assumes the quality of living must reach a higher standard. When my mother was a child, this was not something anyone cared about in Bushwick. My family and the people of Bushwick were stuck there. In an anecdote my mother shared with me, she told me about how the white kids in a nearby neighborhood would chase non-whites out and get violent if they dared to enter their area. This isn’t possible for us.

Gentrification is not wanting to visit the place you grew up because there’s nothing you can relate to any more.

Gentrification is seeing the store owners you loved lose their businesses.

Gentrification is seeing efforts being made to satisfy the comforts of new neighbors and not the people who’ve settled there for years.

Gentrification is annual block parties getting shut down because the music is too loud.

Gentrification is not knowing whether to call someplace home because you’ll never know when someone else will try to claim it.