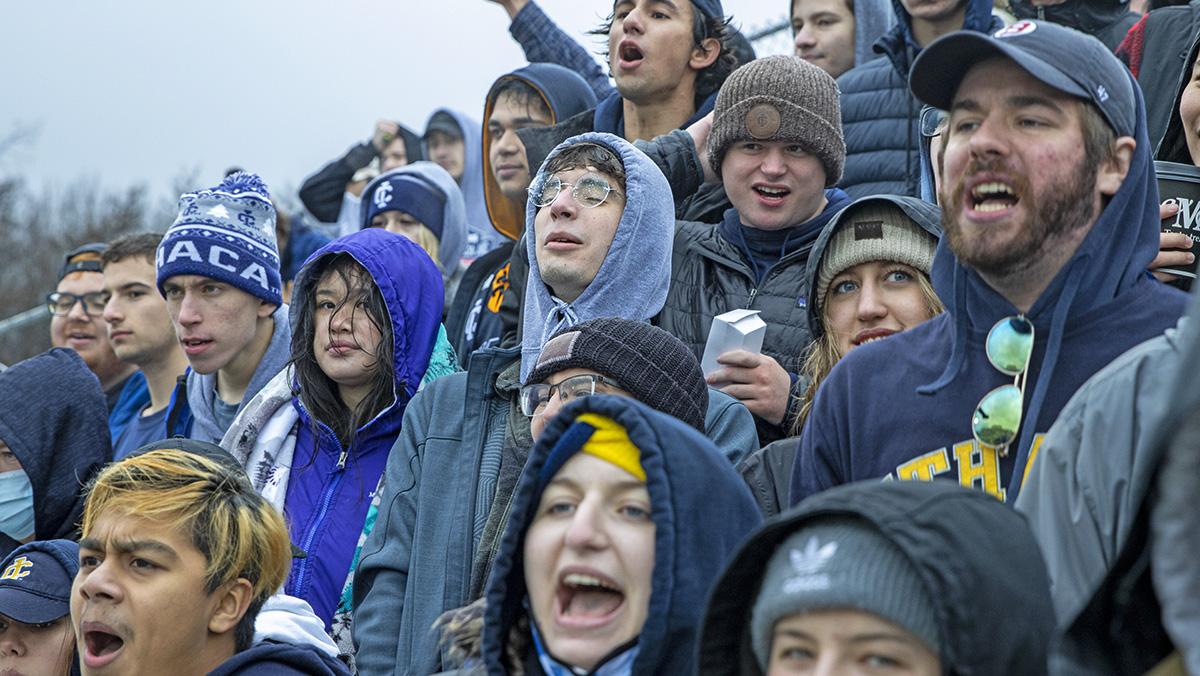 Alyssa Beebe/The Ithacan
Supporters of Ithaca College sat in the cold and rain for the 2021 Cortaca Jug game, the first one held since the 2019 contest at MetLife Stadium. The Bombers lost to SUNY Cortland 28–27 on Nov. 13.
By Emma Kersting — Staff Writer
Published: October 5, 2022

The 2022 Cortaca Jug game is set to be hosted by Ithaca College at Yankee Stadium on Nov. 12 in the Bronx. The stadium, with a capacity of over 50,000 seats, will hold students, alumni, staff and family as they cheer on their college’s team for the “biggest little game in the nation.”

Ben Carlton ’20 said he went to every home football game for three years at the college to cover the team for the radio with WICB sports. Carlton gave half-time coverage as a first-year student and a sophomore and provided play–by–play for the station his junior and senior year.

Carlton said he attended the Cortaca Jug game at MetLife Stadium in 2019. The 2019 Cortaca Jug set the record for crowd size at a Division III football game, with an attendance of 45,161.

“We were all kind of blown away when they told us they’re going to be at MetLife,” Carlton said. “Setting the [Division] III attendance record was really exciting for everybody. I thought it was a blast getting to work; it was really a privilege as well.”

While Carlton said he finds the Yankee Stadium venue to be exciting, he has some concerns about the college hosting at a big name neutral venue again.

“Honestly, I thought the neutral site venue was a one-off type of deal,” Carlton said. “I know there was a lot of discussion over cutting faculty and then still paying God knows how much money to have this game at Yankee Stadium this year, but it’s a big chance for it to be put on a much bigger stage than they could from just doing it on campus.”

Senior Nick Lubrano is the WICB and VIC radio sports director at the college, producing all football broadcasts on the station. Lubrano has been at all of the Bomber football home games this season and said he is looking forward to the Cortaca Jug game this year.

“I personally am very excited for Cortaca to be hosted at Yankee Stadium for the fact that I think it’s going to give our student media a lot of exposure into a really professional environment,” Lubrano said.

Some students said that they wish the college kept the game at Butterfield Stadium, despite the fanfare that came with the game at Metlife Stadium. Cortaca switches between SUNY Cortland and Ithaca College each year in terms of who hosts the game, however, Ithaca College has opted to move the game off-site during its last two hosting years.

“I think it would have been nice for the student body, at least the seniors, to get a home Cortaca game at some point, just to see what the atmosphere would have been like,” Lubrano said.

Carlton, however, attended the Cortaca Jug game hosted on Ithaca College’s campus when he was a sophomore back in 2017.

“The place was packed out, standing room only, everyone’s standing shoulder to shoulder,” Carlton said. “It was super exciting … for it to be [here] and have that extra buzz on campus.”

Senior Sam Hefti said she has never been to a Cortaca Jug game. However, she feels as though the aspect of traveling so far away to the neutral venue for the game takes away chances for students to attend the game.

The college will provide buses from the Athletics and Events Center lot to Yankee Stadium the day of the game. While in 2019 the buses to MetLife did not have a cost to ride, the buses this year will cost $20 round trip to both Yankee Stadium and back to campus.

“The fact that it costs $20 on top of the normal ticket prices if you don’t have your own form of transportation is also not great,” Hefti said. “It’s kind of creating a barrier for students that really want to go to the game and maybe they can only afford a ticket.”

Hefti said that traveling so far from campus to watch the game can add stress to any attendees as the drive to the Bronx from Ithaca takes several hours. She commented that it can be difficult for students who may take part in extracurriculars or have multiple assignments to do on weekends to dedicate so much time to getting to the venue.

“I just wish it was at a location that’s a bit easier to get to if you’re going to host off site,” Hefti said.

Junior Olivia Celenza said she feels that Cortaca being hosted at popular venues like MetLife Stadium and Yankee Stadium is an inappropriate use of the college’s funds.

“To be quite honest, I feel like it’s an unnecessary expense,” Celenza said. “Ithaca’s always talking about how we don’t have money, how the school’s in a lot of financial distress, and yet we are able to go to a big stadium … and put on a third division football game.”

However, Susan Bassett, associate vice president and director of Intercollegiate Athletics, said in an email that the college is not paying anything to have the contest at Yankee Stadium, contrary to what some students believe.

“The only expense we have is as a normal host of a home football game which includes the cost of the officials,” Bassett said via email. “Everything else is fully covered.  We also have the potential to get an additional stipend if the game is a sell-out … The College has budgeted for a normal hosting of Cortaca at IC. Those funds are supplementing the cost of the buses for spectators and performers.

“It will be something cool to tell our kids,” Hankinson said. “Especially for the athletes there, [and] I think it’ll be cool for the cheerleaders.”

The exclusive window for campus ticket sales concluded Sept. 18 at noon. The remaining tickets have been made available to the general public.

Editorial: Don’t forget to wear a mask when you cheer at Cortaca