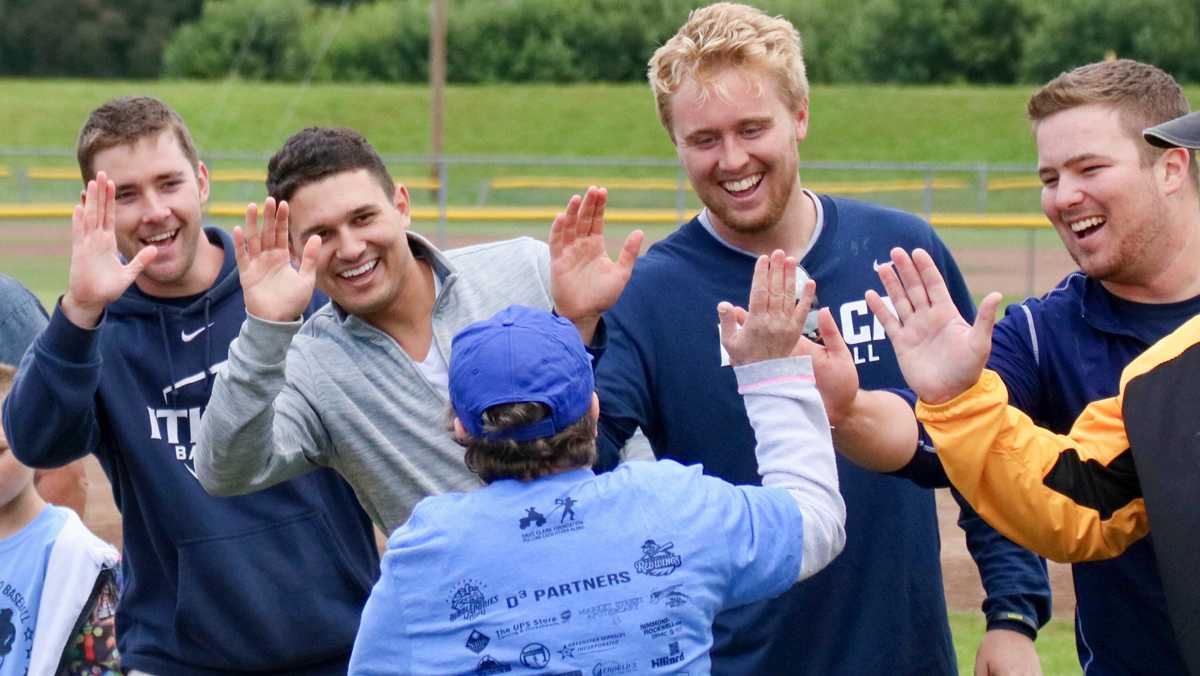 On Sept. 9, four members of the Ithaca College baseball team volunteered with the Dave Clark Foundation, an organization for children with physical and mental disabilities in Corning, New York. After arriving at the fields and not knowing what to expect, the players soon found themselves being hit with foam balls thrown by the children.

“We stood around home plate while the kids threw foam balls at us to practice their aim, and they loved every second of it,” junior first baseman Jackson Smith said.

Many teams participate in events with community organizations, including the Special Olympics and a handful of organizations that address cancer. Although the Office of Intercollegiate Athletics created the Student-Athlete Advisory Committee to help organize service events for teams to participate in, many teams have found service to do on their own.

The committee oversees the community service events every team participates in. They partner with service organizations such as Amazing Grace, Polar Plunge and the Ronald McDonald challenge. These three organizations help families and children that have medical needs.

Maddie Keppel, junior back for the field hockey team and co-chair of the service committee on SAAC, said it is important for athletes to feel a personal connection to their community service.

“We can help them find organizations and provide assistance for coordinating events but most service ideas come directly from personal issues to members of the team,” she said.

Logan Barer ’17, former pitcher on the baseball team and current employee of the Dave Clark Foundation, reached out to his former teammates about volunteering their skills for the event.

“Since our events are free, we need funding, which is why we normally pair up with a minor league team,” Barer said. “The kids get to play with minor league players for the day, but since there was no professional team at this location, the Ithaca guys were essentially the professionals for the day.”

After getting hit with baseballs, the team members ate lunch with the children and were bombarded with questions about their baseball careers. Once lunch was finished, the volunteers lined the bases. The children then ran the bases while giving the volunteers high-fives.

After the day was over, senior pitcher Tyler Hill said, it was a great experience to help the kids have fun.

“The best part was seeing all of their positive reactions to the little interactions I had with them,” he said. “These kids don’t get to play baseball every day, and we allowed them to do that.”

The baseball team is not the only sports team making an impact off the field. The volleyball team has participated in multiple service events already this season.

The Blue and Gold partnered with Unite for Her, an organization that focuses on funding services that support the physical and emotional needs of those with breast cancer, and participated in a Breast Cancer Awareness game Sept. 15 to raise awareness for those diagnosed with breast cancer. The team wanted to continue helping cancer charities and partnered with the Cancer Resource Center, a local nonprofit in Ithaca, that works to create a community for those affected by cancer.

The team helped with the Cancer Resource Center’s walkathon fundraiser by splitting up and spending all of Sept. 6 putting signs up across Ithaca in an attempt to raise awareness. In addition to the walkathon, which is set to happen Oct. 21, the team participates in Cards Against Cancer. Once a month, two teammates pair up and write thoughtful poems, quotes and messages to those diagnosed with cancer.

Monica Vakiner, director of Client Services at the Cancer Resource Center, said that having the volleyball team hang up the signs has helped get the word out about the walkathon.

“They have been very supportive,” Vakiner said. “They help fundraise, and they help us with our mission that no one should face cancer alone.”

Senior defensive specialist Marlee Wierda helps organize and lead the events relating to cancer. As the college’s branch’s president of Colleges Against Cancer, Wierda brings her passion of spreading cancer awareness to the rest of her team.

“Many players on our team have been personally affected by cancer, so we all feel connected to the service that we do,” she said. “Our whole team loves to help the community, and it is something we take pride in.”

The volleyball team also participated in a field day with a local elementary school. Senior outside hitter Joelle Goldstein said the team enjoyed this so much that they decided to host a free volleyball clinic for ages 12 and up Sept. 30.

Goldstein said the community service work done by the volleyball is more than just another team activity.

“It is really important that we are seen not only as athletes, but members of the IC community,” she said. “Doing service helps us realize there is more to our team than just the games. Doing service helps build that close relationship we have as a team.”

The field hockey team also participated in a Unite for Her game this season. Each member of the team donated at least $5 for baskets that were raffled off at the game. The team wore pink ribbons in their hair and pink tape on their wrists and sticks. They even gave their opponents tape to wear.

Each player wrote personalized messages on their wrist tape, including the names of the people whom they wanted to play for. The players then filled the tape with inspirational quotes and heartfelt messages to those affected by cancer. Keppel said each team takes part in a Unite for Her game.

“One of the reasons why the Unite for Her game was such a big success was because many players on the team know people who are or were affected by cancer,” Keppel said. “We were motivated to play for something.”

Field hockey head coach Kaitlyn Wahila said she sees athletes as leaders for the Ithaca community, and if athletes are seen working in the community, others will follow in their footsteps.

“The more student-athletes involved, the better,” she said. “It is
important to make that effort even if practice time is sacrificed, and if other students see us sacrificing our practice time to make a difference, they could be motivated to get involved as well.”

Varsity and club teams participate in Relay for Life