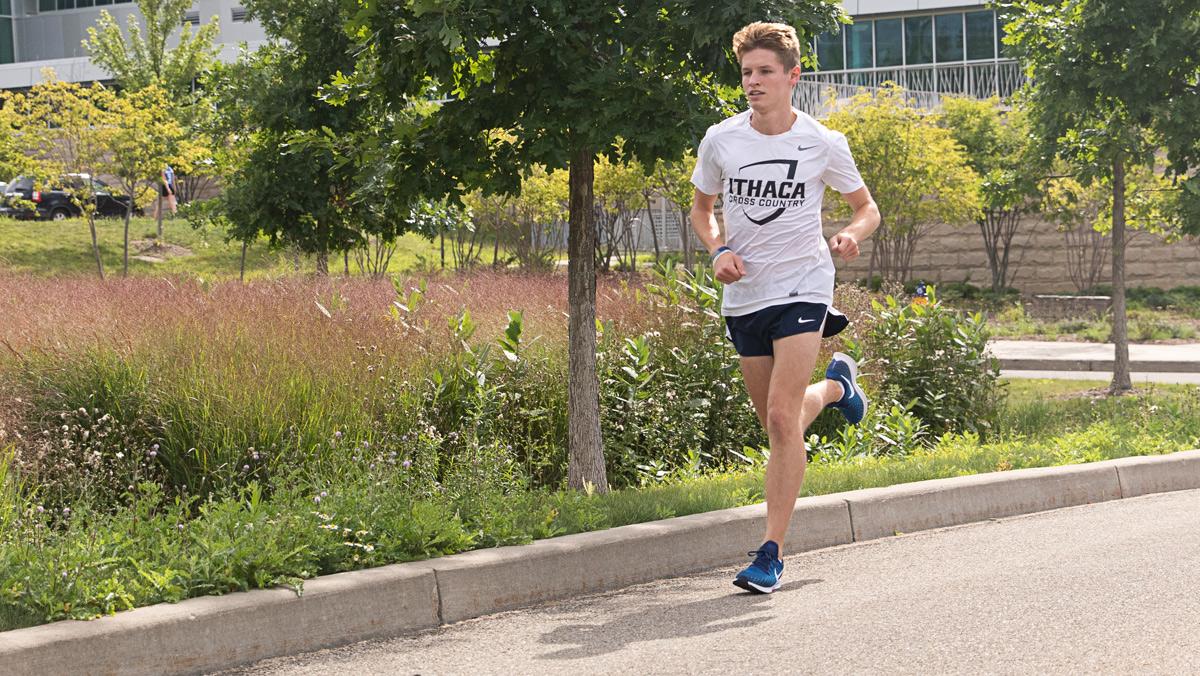 MOLLY BAILOT/THE ITHACAN
Senior runner John Blake developed Achilles tendinitis in spring 2018 and took a leave of absence in the fall to preserve his eligibility. Blake will be competing with the men's cross-country team this season.
By Dani Pluchinsky — Staff Writer
Published: August 29, 2019

Senior runner John Blake remembers exactly when he realized something felt wrong in his ankle. What he couldn’t have predicted at that moment was that a common overuse injury would take him out of school for an entire semester and away from his team for nearly a year.

While recovering from an illness over spring break in 2018, Blake was forced to reduce his running mileage, and when he tried to return to normal training, he began to feel a soreness in the back of his ankle. When he later saw the athletic trainers at Ithaca College, Blake said he learned that he had Achilles tendinitis. 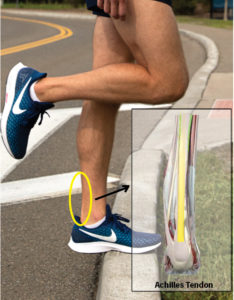 Blake developed Achilles tendinitis, which prevented him from competing for nearly a year.

Achilles tendinitis is an overuse injury in which the Achilles tendon becomes irritated. It occurs most often when a runner has an increased intensity in their runs. Blake said the athletic trainers told him he would miss approximately six weeks of running, and, at first, he did not take the severity of the injury seriously.

“When you’re doing a tough workout, you don’t feel it,” Blake said. “It goes away because it warms up. I did the full workout and then the next day, I could barely walk around campus. I had severe crepitus, which is the scar tissue that builds up on your tendons. So you move around, and it feels like a creaky door. I couldn’t walk, and I knew I messed up.”

At first, Blake said, he planned to return before the end of the 2018 outdoor season. He said that his rehab began with aqua jogging in the pool and that he tried to transition to running on the elliptical for a more weight-bearing workout, but his injury could not sustain the intensity. He said that the athletic trainers tested out different treatments, and, after several months, the injury finally began to feel better. However, he said, when he tried to resume training for cross-country in June 2018, his condition quickly went south again.

Blake first considered taking the 2018 cross-country season off over the summer. He said he did not want to run because he knew he could not compete at his full potential. He also could not redshirt because it was his senior season, and he did not have another year of academics that would allow him to remain eligible. Instead, Blake made the decision to take a leave of absence from school so he would not use up his athletic eligibility.

“I have the rest of my life to work, and I don’t want to jump into that when I’m not ready to, and I didn’t want to waste that opportunity,” Blake said. “I put off a year of my life to run cross-country again, which is fine, and I’m more than happy to do that. It was definitely the right decision.”

During the time he was taking a leave of absence, Blake lived in Ithaca and worked at the Ithaca Coffee Company. He said he tried to still be a part of the team as much as possible. He would do his own practices and workouts to try to get better while the team was practicing. He would even drive himself to meets on the weekends to watch his teammates run.

Eventually, the injury subsided. However, he developed another unknown injury soon after that caused pain on the side of his foot. He said the athletic trainers developed a treatment plan based on healing the location of the injury, and it eventually resolved. He returned as a student at the college in January but did not officially join the team yet because he said he knew he would not be in ideal shape to race.

To get a sense of his fitness level, Blake competed in two track meets unattached after enrolling in school again. He ran at the Ithaca College Bomber Invitational on Feb. 2 and again at the Sunday Invitational, which was hosted by Cornell University on Feb. 10. Running unattached meant that he had no affiliation with the college when he raced, and this allowed Blake to further retain his eligibility. During the meets, he said, he did not finish with the times that he wanted, but he knew it was a step in the right direction to get back into racing.

At the start of the 2019 outdoor season, Blake rejoined the team, but he said that he was still unsure of how he would compete. He said he first began to feel good about running again after he won the steeplechase at the Greyhound Invitational on April 20 with a then–personal record of 9:28.64, beating the runner-up by nearly five seconds.

“The way I finished so strong — it was very encouraging,” Blake said. “I didn’t expect to win. I didn’t expect to PR, and I realized that I was back and in good shape. That’s when I was first confident in my ability that I was able to run again and run with people, and I felt like I deserved to be there.”

The top 20 athletes in the steeplechase qualify for the NCAA Track and Field Championships. Blake said that after the Liberty League Championships, the 20th-ranked runner had posted a time of approximately 9:12. To qualify, he had to knock off more than 15 seconds from his personal record.

Blake competed in the Swarthmore Last Chance meet in which athletes who are on the cusp of qualifying for nationals compete to lower their times. At the Last Chance meet, Blake set a personal best time of 9:09.75, which earned him a spot at nationals.

John Davis, who was the former assistant coach for men’s track and field and is currently the head cross-country coach at The College at Brockport, said he was especially proud of Blake qualifying for nationals.

“Not only was he injured, but he wasn’t even part of the school community, so he had to overcome it, and he did an outstanding job with it,” Davis said. “Everything that he did this year is just a testament to his work ethic and how committed he is and how much he believes in himself, and that’s what makes him so special.”

Senior Jeff Montgomery said the team was surprised that Blake was so successful in spite of his unusual circumstances.

“We all ripped on him,” Montgomery said. “He gained 15 pounds, and he left school for a semester, and he was working at a coffee shop, and we would always call him the fat barista. Then he came back and made nationals, so look at the fat barista now.”

Blake missed an outdoor track season and a cross-country season, and because of his choice to compete unattached for an indoor season, he still has a full year of remaining eligibility to run with the college. Even though Blake only took a leave of absence for one semester and could graduate in December, he said he is going to wait until May so he can compete for the full year.

The NCAA requires its athletes to be full-time students, except in the final semester of their degrees. In that final semester, a student-athlete only needs to take the number of classes needed for them to graduate. Blake said he plans to use his last semester to finish up his French and sports studies minors and will only take two or three classes.

After enduring so many setbacks, Blake said he is looking forward to his final season running for the college.

“The end of last year was great, but I still want to see how much better I can get,” Blake said. “Plus, it’s my last year, so there’s definitely a little extra motivation to give it everything I’ve got and make it as special as possible.”