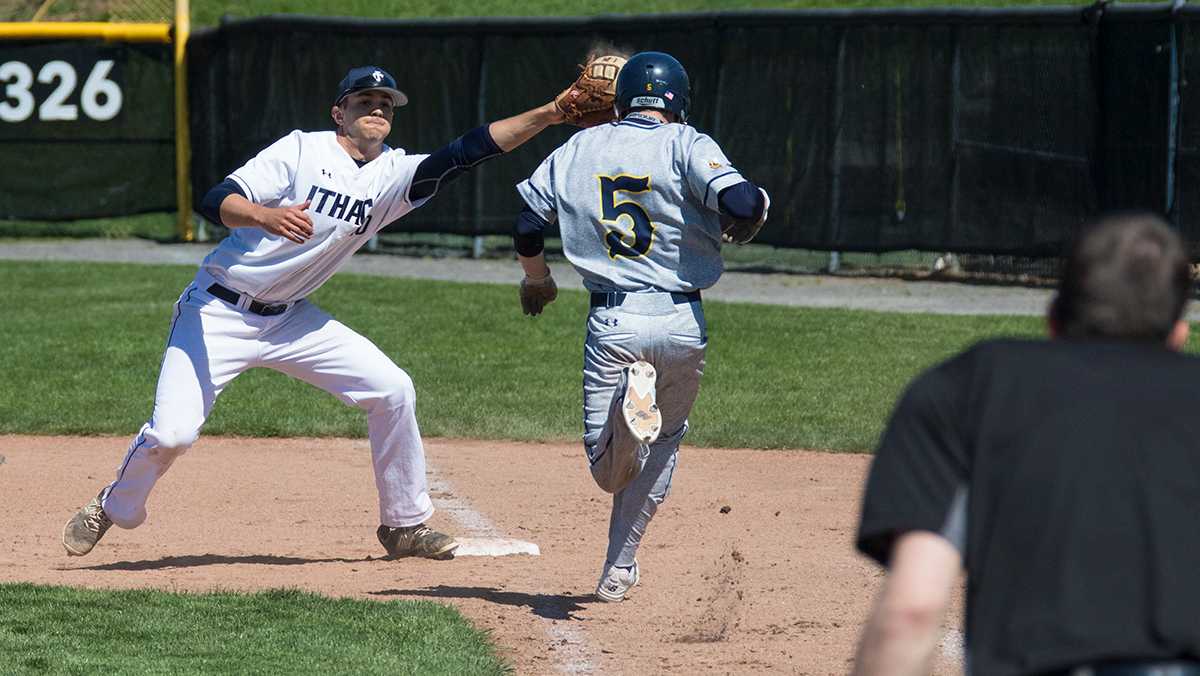 CAITIE IHRIG/THE ITHACAN
Sophomore first baseman John Peterson stretching across the base line to get freshman outfielder Kyle Trombley of the Yellowjackets out at first base in the Bombers' game against the University of Rochester.
By Max O'Neill — Staff Writer
Published: April 24, 2017

The 19–8 Ithaca College baseball team defeated the 15–14 SUNY New Paltz Hawks 6–0 April 22. The Bombers’ winning pitcher was junior Robby Buffis who improves to 5-2 on the season with the win. The losing pitcher for the Hawks was junior Brian LoRusso who falls to 2-5 on the season.

The Bombers were up 2–0 in the first inning due to a pair of solo shots from sophomore pitcher Andrew Bailey and sophomore outfielder Sam Little.

In the seventh inning, senior second basemanJosh Savacool made it a 5–0 game after hitting a homerun, allowing both sophomore outfielder Matt Carey and junior outfielder Domenic Boresta to score, making it a 5–0 game.

The Blue and Gold scored again after Carey was walked and the Hawks catcher made a throwing error, allowing senior Ryan Henchey to come home and make it a 6–0 game.

The Bombers were home for a matchup against the University of Rochester Yellowjackets April 23, winning 12–11. With the win, the Bombers improve to 20–8 on the season. With the loss, the Jackets fall to 7–16. The winning pitcher for the South Hill squad is sophomore Matt Eiel. The losing pitcher for Rochester is freshman Jack Donlon.

The Yellowjackets got on the scoreboard first, with a 4–0 lead until the Bombers started a comeback in the second when Carey hit a single, allowing sophomore catcher Adam Gallagher to score.

In the eighth inning, the Bombers had a comeback, allowing them to win the game. Savacool scored on a walk, making it a 11–10 ballgame. Senior catcher Ryan Henchey was up to bat next and hit a double which allowed Thompson and freshman utility player Ben Kutler to score. Two batters later, Boresta hit a single to score Henchey and Little. Sophomore utility player Cam Fuoti then came up to bat, as a pinch hitter, and hit a single, scoring Boresta to tie the game at 11.

In the ninth inning, Henchey hit a single past center field to score Thompson and win the game.

Henchey said the game started off rough, but the team was able to come together for the win.

“I mean, I think we realized earlier in the year, that this team had something special and today obviously we had a rough start, but we fought hard, even our guys that don’t normally play came up big,” he said. “I mean Cam Fuoti with that big tying run single. I mean, great day to play some baseball, I think we came to realize later in the game, that it was time to show for it.”

Head coach George Valesente had a few team huddles to make sure the team understood to keep their composure.

“I just tried to emphasis, you can’t do it with one swing,” Valesente said. “It’s gotta happen little by little, so give us some base runners, give two or three here, two or three there, but the key thing is to get on base, we need base runners, so you can’t be chasing pitches, you can’t be putting yourself out, swinging at pitches out of the strike zone to try to make things happen, so we did a little bit of that.”

The Bombers will take on Oswego State at 4 p.m. April 25 in Oswego, New York.