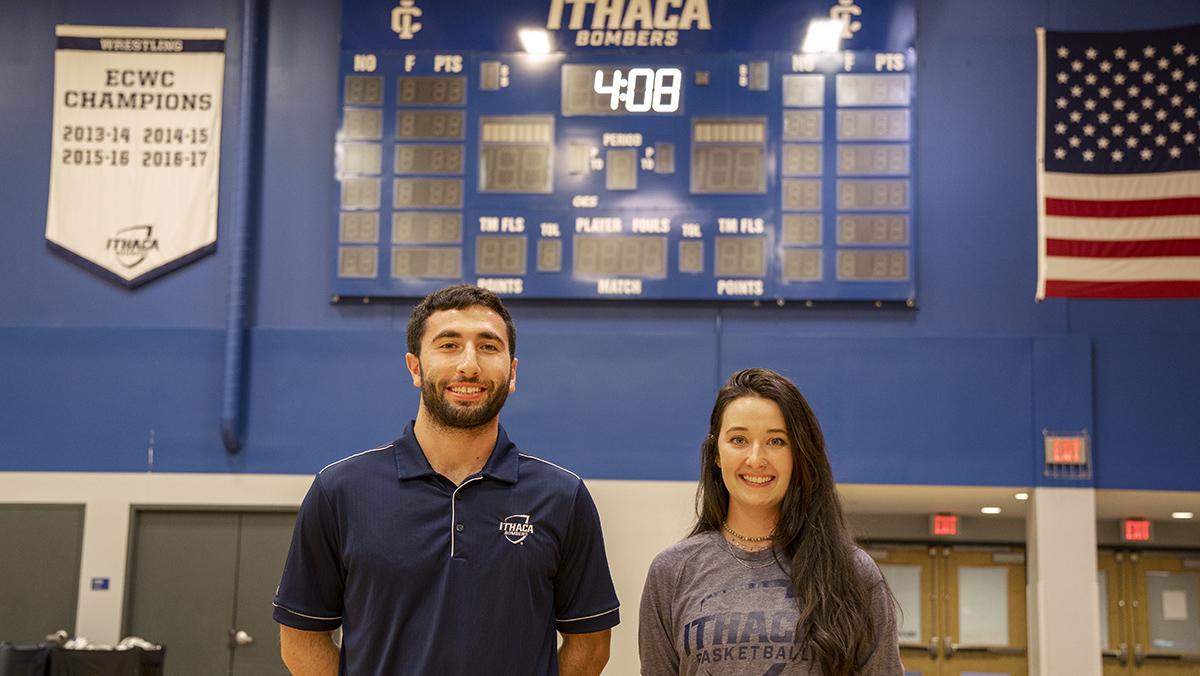 Leila Marcillo-Gomez/The Ithacan
From left, Matthew Smith and Mary Mazzella, the new assistant coaches for the Ithaca College men’s and women’s basketball teams, are getting ready for the season.
By Inbaayini Anbarasan — Staff Writer
Published: August 24, 2022

Over the summer, the Ithaca College women’s and men’s basketball teams both recruited new assistant coaches. Mary Mazzella and Matthew Smith are set to join the college’s teams as assistant coaches for the upcoming season.

Mazzella, who is no stranger to Division III basketball, had a four–year career for the SUNY Oswego Lakers, according to a statement from Ithaca College. Mazzella led the team as captain for two years and was also named the Lakers’ most valuable player during the 2015–16 year, before she graduated in 2017.

Mazzella also spent her time working as a leader and advocate for student athletes. Mazzella was a member of SUNY Oswego’s Student-Athlete Advisory Committee (SAAC) and was invited to many NCAA leadership training workshops, where Raymond said she refined her leadership skills and worked alongside coaches in order to learn how to lead a team.

“Her basketball knowledge, IQ and leadership, those are all things that I’m very familiar with, with Mary that she’s going to bring,” Raymond said.

Raymond said he is excited about the opportunity of having a new coach with the team, especially one with the experience Mazzella has.

“I’m really excited about the places that she’s been,” Raymond said. “The things that she’s done are going to be different than what I’ve done and what any of our players have ever done.”

Mazzella has previous experience with the Bombers’ as her sister, Meghan Mazzella ’19, played for the Bombers. Usually, Raymond would bring his former players back into assistant roles after they graduated, but he said he was looking forward to having Mary Mazzella on the team.

“This time I didn’t have [students] that were going to be available, so I did the next best thing. I chose the sister of one of our former players,” Raymond said.

Mazzella said she was excited to join the team, especially after having visited Ithaca on many occasions to support her sister.

“I know the area, and I know the program is very successful and has a great tradition, so it was something I couldn’t say no to,” Mazzella said. “I’m really looking forward to getting really involved with just the program and learning how everything works and getting to know all the players in the staff that make this program so successful and the athletic department that supports them.”

Joining the men’s basketball team is Matthew Smith. Smith graduated from SUNY Brockport in 2017, spending three years on their team.

As a basketball student athlete in college, Smith did not have the same opportunity others would to study abroad, as the season spans between both fall and spring semesters. However, following his graduation, Smith was offered the position of a youth basketball coach in Guangzhou, China.

“It was a great experience being able to kind of travel and be able to coach basketball as well, and just a really phenomenal culture to spend every day there, and really opened up my eyes to a lot of different things,” Smith said.

Waleed Farid, head coach of the men’s basketball team, said Smith’s experience coaching in China set him apart and eventually led him to the position of assistant coach for the Bombers. Farid said he thinks Smith’s time in China says a lot about the new coach.

“One of the things I look forward to in our coaches is someone who has some different experiences, someone who has shown that they are willing to challenge themselves, and I think making a move like that is something that shows a little bit of maturity,” Farid said.

As assistant coach, Smith said he is going to make sure to support the student athletes as much as possible by working as a team with the coaching staff and the players. Smith said he knows the team’s priorities lie both on and off the court by setting a high bar academically for their players.

“I think the best way to [support athletes] is by giving my time,” Smith said. “I want to make sure that I give as much of my time to the players and the student athletes, and to coach Farid, as possible, because I really feel like that’s the best way to show that you’re invested and to fairly care about everyone involved.”

With plenty of time before the basketball seasons start in November, both Smith and Mazzella are ready to get going. For Smith, the season can’t come soon enough.

“I’m just super excited to be here at Ithaca College, and I’m ready to work hard, and I’m really looking forward to this season,” Smith said.