Blue and Gold basketball comes together on the road 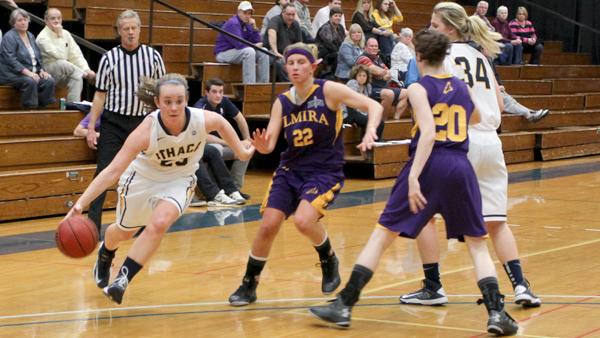 Though the women’s basketball team is playing away for seven of their first 10 games this season, the Bombers are using their time on the road to build chemistry on and off the court.

This year presents an unusual challenge for the Blue and Gold, because they have only two home games before winter break. However, Head Coach Dan Raymond said he likes to schedule more away games at the beginning of the season, because it helps with team camaraderie.

“When you’re on the bus, that’s the opportunity for your team to really continue to build those bonds as far as relationships,” Raymond said.

Another way the South Hill squad builds these bonds is by playing word games together on the bus. During the travel back to Ithaca after competing in the Skidmore Invitational, the team played “Encore.” Players are divided into two teams, a word is chosen and each team must sing a lyric that includes the word back and forth to each other.

Junior guard Elisabeth Wentlent said spending a lot of time together while traveling helps the players learn “the ins and outs” of each other and what motivates each player to perform well.

Chemistry has already played a big role this season to help the Blue and Gold go undefeated on the road, but junior guard Kathryn Campbell said the team’s mental strength helps them keep focus amid the bonding.

“It starts with staying focused in practice and then trying to keep it through by not worrying about anything but the game on the bus rides there,” Campbell said.

The Blue and Gold’s toughest challenge so far this season was their last away game against St. Lawrence University last Friday. The game included nine lead changes, and the Saints had the biggest lead of the game with 12 points. The Bombers’ teamwork helped them prevail and pull ahead with four seconds remaining to win 65-64.

Campbell said that growing closer as friends and a family helps their overall team play, because it becomes more about the success of the team than the individual.

“Everyone is just looking out for each other on the court, because we all want each other to do well,” Campbell said.

Wentlent said traveling a lot can be taxing on the South Hill squad because of several factors, including time on the bus, staying in hotels and shortened warmup times, but overcoming these disadvantages will only help the team get stronger.

“It definitely affects us physically,” Wentlent said. “It’s just a lot on the road, and then it’s tough to not be able to play in front of your home crowd, but it definitely challenges us to kind of get over the humps of being tired and not having a big fan base.”

However, senior forward Devin Shea said traveling early on is better, because the Bombers will have the advantage later in the season.

“It’s a chance to get all those road games out of the way in the beginning of the year, because we’re not going to be at our peak, and neither are the other teams,” Shea said. “If we’re able to just start off strong on the road, then we’re going to come home and have our home stretch, and the teams that we’re playing are going to have to deal with being on the road.”

The Blue and Gold are excited to begin playing more games in Ben Light Gymnasium. Their home opener was an Empire 8 matchup against Elmira College with the Bombers winning 66-46. Wentlent said though being on the road will benefit the team, the South Hill squad is ready to show Ithaca College why it believes it can win a national championship.

“[Being on the road] is something that’s going to push us,” Wentlent said. “It’s going to demand us to really hold ourselves accountable each game when we’re away from the school.”