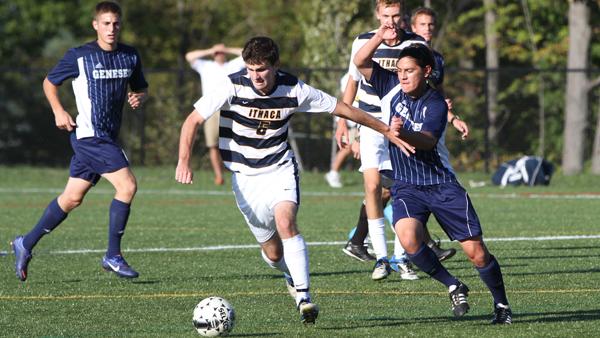 It’s the first day of preseason, and a mix of emotions fills the sea of freshmen looking to wear the Ithaca name on the front of their jerseys.  Some are feeling nervous, some anxious, others confident, but all are excited to get onto the field and prove themselves.

Every freshman, regardless of sport, must adjust to the collegiate level. The pace is quicker, the opponents are stronger and every player is competing at a high level.  With 13 freshmen chosen to represent the Blue and Gold this fall, the incoming class has already made an impact — the most notable player being freshman back Joey Dobbins, who became the first Bomber this season to win the Empire 8 Player of the Week award for his game-winning goal against Muhlenberg College on Sept. 9.

Watching the newest members of the men’s soccer team play confidently, it would be hard to believe that nerves were ever present. Dobbins, along with the other members of his class, was able to overcome those nerves and show he deserved a spot on the team.

“[The first practice] was pretty nerve-racking because you look around at the kids and you’re wondering, ‘How good are these kids?’ and ‘Am I going to be able to compete at this level?’” Dobbins said. “But after halfway through the session, you get comfortable.”

The Bombers have begun the season with an overall record of 2–1–3. In those six games, at least three freshmen were featured in the starting lineup, while several others came off the bench.

Freshman defender Jordan Filipowich and Dobbins have started every game so far for the Bombers. With each practice session and game, Dobbins said, he feels more comfortable playing at the collegiate level.

“I’m much more confident than I was at the beginning of the year,” Dobbins said. “I was nervous, but being a starter makes me more and more confident, and it keeps helping me improve my game.”

Filipowich said the seniors have also helped the freshmen adjust to the college game through team bonding.

“When our game was postponed against Muhlenberg on Saturday [Sept. 8], we went bowling as a team,” Filipowich said. “I thought that was a great way to have everyone connect a little bit and get to know each other more. We’re all just a big family, and that’s nice to have.”

The South Hill squad has scored six goals this season, three of them by freshmen. In addition to Dobbins’ game-winner against Muhlenberg, freshman midfielder Drew Tallon recorded his first career goal in the Bombers’ matchup against Nichols College on Sept. 2.

Tallon, who has started three games this season, said he enjoys playing at a higher level of competition.

“It’s fun to play with better players, because I was used to kind of playing with people who were weaker than me in high school,” Tallon said. “Just coming in and being able to play with players with your ability is a lot more fun, more enjoyable and more rewarding.”

The class of 2016 has shown they have the ability to contribute to the team’s success. Filipowich said the freshmen will look to continue making their mark as they gain more experience.

“Everyone that goes on the field now is confident on the ball,” Filipowich said.  “We still have a lot of things to work on, but from the beginning of the season we’ve had a lot of changes with our key players. We’ve had people stepping up — for example, Joey with his incredible 25-yard boot into the back of the goal. That was a great, uplifting thing for us.  Everything is being positive, and it’s going uphill.”