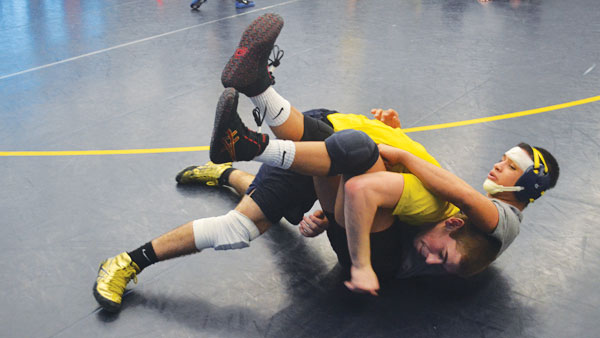 Jennifer Williams/The Ithacan
Sophomore Eamonn Gaffney performs a take down on sophomore Josue Escobar at the wrestling team’s practice Jan. 20 in the Hill Center. The Bombers currently have a 7–2 record this season.
By The Ithacan — Ithacan Staff
Published: January 22, 2014

The No. 13-ranked wrestling team opened its 2014 schedule Jan. 10–11 at the Budd Whitehill National Duals in Williamsport, Pa. Despite placing fourth in the tournament, the South Hill squad recorded its first losses of the season but still finished with a winning record of 3–2 for the weekend.

The Blue and Gold scored eight victories of 10 bouts against Coast Guard. Junior Kristopher Schimek won by pinfall at 165 pounds, and freshman Liam Korbul won in the 184-pound weight class by major decision.

The South Hill squad came back to defeat Heidelberg in a well-fought match. With Heidelberg ahead early, junior captain Alex Gomez tied the match with a major decision victory, and freshman Nick Wahba’s 141-pound win gave the Bombers the go-ahead points.

The Bombers had the lead early when facing the SUNY Cortland Red Dragons. With victories from Gomez, Toribio, freshman Jimmy Kaishian and sophomore Eamonn Gaffney, the Bombers began the match leading 18–9. But Cortland won its last three bouts to squeak out the 19–18 win.

In the Bombers’ final matchup of the weekend, Collins, Gomez, Schimek and senior Shane Bartrum all picked up victories. But it was not enough to stop Olivet, a team that gained four victories during the weekend.

The Bombers traveled back to Williamsport, Pa., on Jan. 18 for the Empire Collegiate Wrestling Championships where they were crowned conference champions.

The Blue and Gold had three individual champions included in its six finalists. The squad got revenge against SUNY Cortland by scoring 18.5 points more than its rival.

Gomez won at 133 pounds, Gaffney won at 149 pounds and Schimek won his class at 165 pounds. Freshmen Steven Sabella, Korbul and Kaishian also placed in the top six in their respective weight classes.

The Bombers and Red Dragons will square off again in a dual meet matchup at noon Jan. 25 in Glazer Arena.

Despite opening the 2014 season Jan. 11 in the newly renovated Ben Light Gymnasium, the gymnastics team dropped its first of four competitions against SUNY Brockport this season, 185.325–163.475.

The Blue and Gold only had three top-five finishes in the dual meet. Senior Shilanna Gallo took fourth in the uneven bars with a score of 9.025. Sophomore Lara Haberle and freshman Alexis Mena both finished fifth in the balance beam and floor exercise respectively. Haberle scored 9.1 while Mena finished with an 8.975.

Gallo and Haberle each had a first-place performance. Gallo scored 9.30 on the uneven bars, and Haberle scored 9.45 on the balance beam. Senior Rani Jacobson was a runner-up in the vault, as she scored a 9.325. However, the Bombers could not catch the Bears, who scored the highest team totals in all four events.

The Bombers and Bears will meet again at 11 a.m. Jan. 25, as the Blue and Gold will host a tri-meet with Ursinus and Springfield College in Ben Light Gymnasium.

The men’s basketball team has struggled in the beginning of the new calendar year, as the team is in the midst of a five-game losing streak and currently holds a 4–12 record.

The Bombers dropped back-to-back contests with both Alfred University and Utica College Jan. 10–11. The conference-leading Alfred Saxons capitalized on the turnover battle recording a whopping 30 points off turnovers to defeat the Bombers 94–67.

In the matchup with Utica, the Blue and Gold lost 87–73. Senior forward Frank Mitchell led the scoring for the Bombers with 21 points, and junior guard Max Masucci came off the bench to contribute a season-high 12 points.

The struggles continued for the Bombers with a 67–51 loss to the University of Scranton on Jan. 14. Against the Royals, Mitchell and senior center Tom Sweeney scored two-thirds of the Bombers’ points. Mitchell recorded his fifth 20-point game of the season, while Sweeney scored 14 points. The Bombers’ 51 points were the second-fewest points scored this season.

The St. John Fisher Cardinals and Nazareth Golden Flyers both flew past the Bombers on Jan. 17–18. Against Fisher, Mitchell led the scoring again with 18 points, which was his fifth straight double-digit point performance. However, the Cardinals won 79–56.

Mitchell and Sweeney scored 22 and 13 points respectively against Nazareth, but the Bombers had trouble defending. All five starting Golden Flyers scored at least 10 points, leading them to a 77–58 victory.

The women’s basketball team won all four games it played Jan. 10–18. In its first contest, the squad hosted Empire 8 conference foe Alfred University in Ben Light Gymnasium. The squad earned a convincing 91–48 victory against the Saxons, as it was the most points scored by the Bombers this season.

After the win against Alfred, the Bombers traveled to Utica College on Jan. 11 and defeated the Pioneers 75–53. The Blue and Gold had four players score in double figures, as senior guard Mary Kate Tierney led the way with 19 points. Tierney also added seven rebounds, four steals and two assists.

The Bombers also traveled to Rochester, N.Y., for a pair of games against St. John Fisher College and Nazareth College on Jan. 17 and 18. The Bombers defeated the Cardinals 62–42, and Tierney had a double-double, notching 13 points and 10 rebounds.

The Bombers followed up with a 63–54 win against the Golden Flyers, and they have now won six of their last seven games.

The 11–1 men’s swimming and diving team returned to action Jan. 11 with a first place finish at the Rensselaer Polytechnic Institute Kumpf Invitational. The Bombers took first place in 10 of 13 events. Junior Lucas Zelehowsky had a strong showing with three first-place finishes, setting a meet record in the 200-yard butterfly with a time of 1:55.80.

The South Hill squad continued to shine on Jan. 18, taking first in 15 of 16 events in a dual meet against the University of Rochester. Junior Matt Morrison helped the Bombers sweep the diving events. Morrison scored 257.18 points in the 1-meter dive and a season-best of 316.65 points in the 3-meter dive.

The women’s swimming and diving team has maintained a perfect 9–0 record so far this season. The squad competed Jan. 11 in a tri-meet with SUNY Fredonia and Nazareth College, placing first in 11 of 16 events. Freshman Grace Ayer dominated the meet with four first-place finishes, earning her the Empire 8 Athlete of the Week. She took first place in the 200-yard individual medley, finishing in 2:12.93.

The Bombers won their dual meet with Rochester on Jan. 18, taking the top spot in nine of 16 events. Freshman Nickie Griesemer swept the diving events, earning season-bests 1-meter and 3-meter dives. She scored 278.25 and 279.38 points respectively.

Both squads return home at 1 p.m. Jan. 25 to face Alfred University at the Athletics and Events Center Pavilion.

The women’s track and field team had seven Eastern Collegiate Athletic Conference qualifiers on Jan. 18 at the Ramapo Indoor Select Meet at the Armory in New York, N.Y.

The men’s track and field team also competed at the Armory, hitting three ECAC qualifiers. After establishing a new record for the Bombers on Dec. 7, junior sprinter Rashaad Barrett placed third and hit the ECAC qualifier in the 60-meter dash, finishing in 7.08 seconds.

Both squads will compete again Jan. 25 at the Cornell University Upstate Challenge.