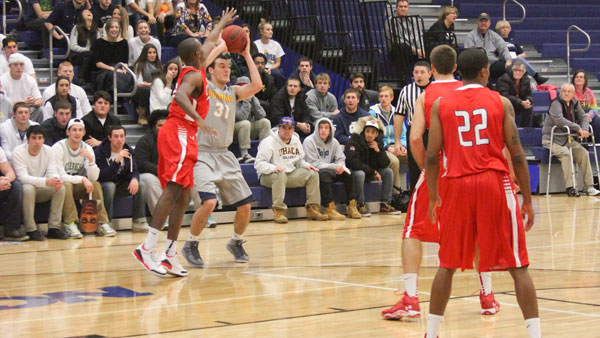 The men finished first in a total of seven events at the dual meet on Nov. 23.

The Bombers return to action as they host the Bomber Invitational. This year, the event will run from Dec. 6 through Dec. 8 at the Athletics & Events Center Aquatics Pavilion.

The women’s cross-country team finished 23rd out of 32 teams at the NCAA Championships in Hanover, Ind., on Nov. 23.

Graduate student Jenn Randall led all South Hill squad runners, as she became the 21st All-American in program history. With a time of 21:37.70 on the 6K course, Randall placed 12th out of 280 runners.

Randall’s individual finish was the ninth highest in program history, while the team’s finish was its best since placing 20th in 2007.

The wrestling team placed ninth out of 20 teams with 41.5 points at the New York State Intercollegiate Wrestling Championships on Nov. 24 at Cornell University. The Bombers are ranked No. 7 nationally in Division III. SUNY Cortland was the only Division III team that placed higher than the Bombers in the championships. The Red Dragons finished with a score of 105.5 points.

The Bombers will resume action at the Spartan Invitational on Saturday at York College.

The women’s soccer team ended its 2013 playoff run in the NCAA quarterfinals, dropping the Elite 8 game 1–0 to William Smith College.

However, the team’s weekend was highlighted by a dramatic overtime upset over the two-time defending national champion Messiah College. Freshman forward Megan Nash netted a goal in the top left corner of the net off a feed from freshman forward Holly Niemiec in the 96th minute to push the Bombers over the Falcons.

Sophomore goalkeeper Beth Coppolecchia recorded her 10th solo shutout of the season, stopping all seven shots. Messiah outshot Ithaca 21–6 in the game, including 12 shots to Ithaca’s one in the second period.

With the win over Messiah, the Bombers advanced to the Elite 8 round to play William Smith for the second time this season. In the first matchup between the two teams, the Herons capitalized off of a goal in the first period to defeat the Bombers 1–0.

In the NCAA quarterfinal game, the Herons once again bested the Blue and Gold 1–0, however, junior midfielder Dineo Mmtula’s goal came in the second half. The Herons accounted for two of the Bombers’ three losses in 2013.

The Bombers finished their 2013 season as Empire 8 conference champions, NCAA Division III quarter finalists and had an overall record of 19–3.

The men’s basketball team fell by a score of 76–67 to the Hobart College Statesmen on Nov. 22. Sophomore guard Sam Bevan led the way with an all-around performance, featuring 14 points, six rebounds and five assists.

The Bombers were able to prevail the next day, coming up with a 71–64 over Wells College. For their second win of the season, senior forward Frank Mitchell had a dominating performance with 23 points and nine rebounds.

On Dec. 3, the South Hill squad lost the first of a three game home stand against the SUNY

The Bombers took a 37–29 lead in the first half. The Red Dragons began the second half strong and never looked back with senior center Kevin McMahon taking over with 27 points and 12 rebounds.

Though the Bombers lost, Mitchell led the way for the Blue and Gold. Mitchell had 12 points to go along with 12 rebounds for his third double-double of this season.

For their next two games, the Bombers will take on St. Lawrence University on Saturday and Skidmore College on Wednesday in Ben Light Gymnasium.

The women’s basketball team traveled to Amherst, Mass., on Nov. 23 to play Farmingdale State College. The Bombers came away with the victory by a score of 75–60.

The next day, the Bombers took on Amherst College. The South Hill squad fell to the Lord Jeffs 44–66. This was the first loss of the 2013–14 season.

Senior guard Kathryn Campbell led all scorers with 10 points and four steals. The Blue and Gold was 6-for-15 from the free-throw line.

Tierney dominated play for the Bombers, scoring a career-high 28 points and eight rebounds. Campbell added 14 points for the Blue and Gold and senior forward Jenn Escobido had eight rebounds. Even though the Red Dragons outshot the Bombers 45.7 to 37.5 percent, the South Hill squad led in rebounds 42–28.

The Blue and Gold will play against the St. Lawrence University Saints at 2 p.m. Saturday in Ben Light Gymnasium.