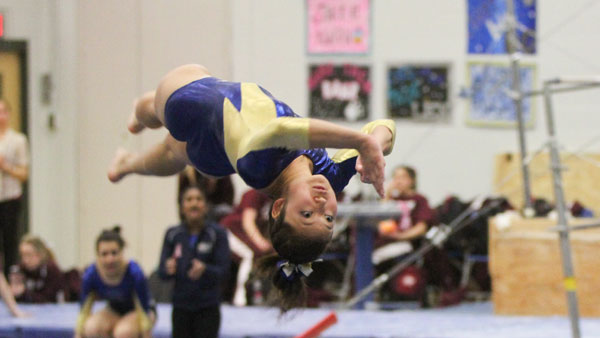 Matthew Colgan/The Ithacan
Sophomore Megan Harrington launches into a backflip during her routine at the gymnastics team’s tri-meet against Springfield College and Ursinus College on Jan. 25 in Ben Light Gymnasium.
By The Ithacan — Ithacan Staff
Published: January 29, 2014

The wrestling team fought a tough match but fell to defeat in overtime against No. 5-ranked Wabash College on Jan. 25 in Glazer Arena.

In their second overtime match of the season, the Bombers stuck with Wabash all meet, finishing regulation tied at 22. Wabash won the tiebreaker based on total points determined by technical falls, major decisions and decisions.

The match was even for its entirety, despite a Wabash victory in the 125-pound weight class to begin the competition. Sophomore Henry Beaman and junior Alex Gomez responded with two victories. Gomez wrestled at 141 pounds, up a weight class from his usual 133 pounds.

Junior Kristopher Schimek and freshman Carlos Toribio also gained wins. Senior Shane Bartrum won by decision in the 285-pound weight class to tie up the match, but it was not enough for a victory.

The following day the Blue and Gold faced the Hartwick College Hawks, a team that beat the Bombers 63–60 on Jan. 3. This time, the Bombers came away with the victory by a score of 70–59. Once again, Escobido led the Bombers, scoring 18 points and hauling in six rebounds. Senior guard Mary Kate Tierney had a double-double, scoring 11 points and 13 rebounds, while freshman guard Ali Ricchiuti scored a career-high 12 points. With the win, the Bombers are tied for first place in the Empire 8 conference standings.

The Bombers were able to secure a 62–48 victory against Elmira College on Jan. 28.

Brady led the Blue and Gold in scoring with 18 points. Tierney nearly had a triple-double, as she tallied 11 points, 11 rebounds and eight assists.

The South Hill squad will return to action at 8 p.m. Feb. 4 in Houghton, N.Y., next to take on the Houghton College Highlanders.

Junior Emilia Scheemaker broke the college’s triple jump record that she set March 1. She met an East College Athletic Conference qualifier, placing second with a 12.25-meter leap. Her jump is at the top of the New York State Collegiate Track Conference leaderboard.

The men’s track and field team hit three ECAC qualifiers on the same day on the East Hill. Sophomore Aaron Matthias placed sixth in the 200-meter dash with a time of 22.73. Junior Dennis Ryan placed seventh in the 1,000-meter run in 2:33.97, and junior Rashaad Barrett finished ninth overall in the 60-meter dash in 7.10 seconds.

Both teams will return home Feb. 1 to compete in the Empire 8 Indoor Championship in Glazer Arena.

The men’s basketball team dropped its sixth consecutive game Jan. 24 falling to Stevens Institute of Technology 85–68. This loss marked the seventh consecutive contest where the Bombers came up short against a conference opponent.

Junior Max Masucci gave the Bombers a late-game spark, as he led the team with 16 points. Seniors Frank Mitchell and Chris Jordan also scored in double-digits with 10 and 11 points, respectively.

It was the same story Jan. 25., as the Bombers dropped their rematch with Hartwick College 76–58. Junior Keefe Gitto aided the Bombers’ offense with eight points off the bench in first 20 minutes, and he finished the game with 15 points.

The Bombers hung on to a 69–68 victory Jan. 28 against Elmira College.

Senior forward Frank Mitchell contributed 25 points in the squad’s first win against a conference team this season. Mitchell’s 25 points were his third highest scoring output of the year.

The Bombers will continue their road trip at 6 p.m. Feb. 4 against Houghton College.

The gymnastics team lost to both of its opponents in its second home contest of the year against Springfield College and Ursinus College on Jan. 25 in Ben Light Gymnasium. The Bombers finished with a score of 175.925, but Springfield and Ursinus scored 184.575 and 180.125 points, respectively.

Senior Shilanna Gallo received the most points on the team for her uneven bars routine with a score of 9.500. She finished in second overall on the uneven bars.

Sophomore Megan Harrington finished third overall in the all-around category. She scored 9.125 for her beam routine, 9.275 in the vault jump and 9.375 for her floor routine. She finished with 36.725 points.

The Bombers will compete again at 1 p.m. Feb. 1 at SUNY Brockport.

The men’s swimming and diving team won its dual meet with Alfred University on Jan. 25, overpowering the Saxons by a score of 207–80 at the Athletics and Events Center Pavilion. The Bombers controlled most of the meet, taking gold in 12 of 16 events.

The team of seniors Connor White, Taylor Van Cott, Zack Kundel and junior Lucas Zelehowsky took first place in the 200-yard medley relay with a time of 1:37.12. The South Hill squad also won its final event of the day, as the duo of seniors John Carr and Zack Kundel, and juniors Logan Metzger and Peter Knight finished first in the 200-yard freestyle relay with a time of 1:26.11.

The women’s swimming and diving team also won its dual meet with Alfred 206–90. Like the men, the Blue and Gold took first place in 12 events.

The Bombers earned first place in the 200-yard medley relay to begin the competition. Freshmen Grace Ayer, Sam Reilly and Lake Duffy, and sophomore Megan Zart finished with a time of 1:52.26.

Ayer, the reigning Empire 8 Athlete of the Week, also led the Bombers with two individual first place finishes. She took gold in the 200-yard fly with a time of 2:12.85 and the 400-yard individual medley clocking in at 4:38.26.

Freshman Nickie Griesemer helped the Bombers sweep the diving events for the day, with a first-place score of 295.35 in the 3-meter dive and 275.65 in the 1-meter dive.

Both squads return to action at 2 p.m. Feb. 1 in the Athletics and Events Center Aquatics Pavilion to take on Union College.