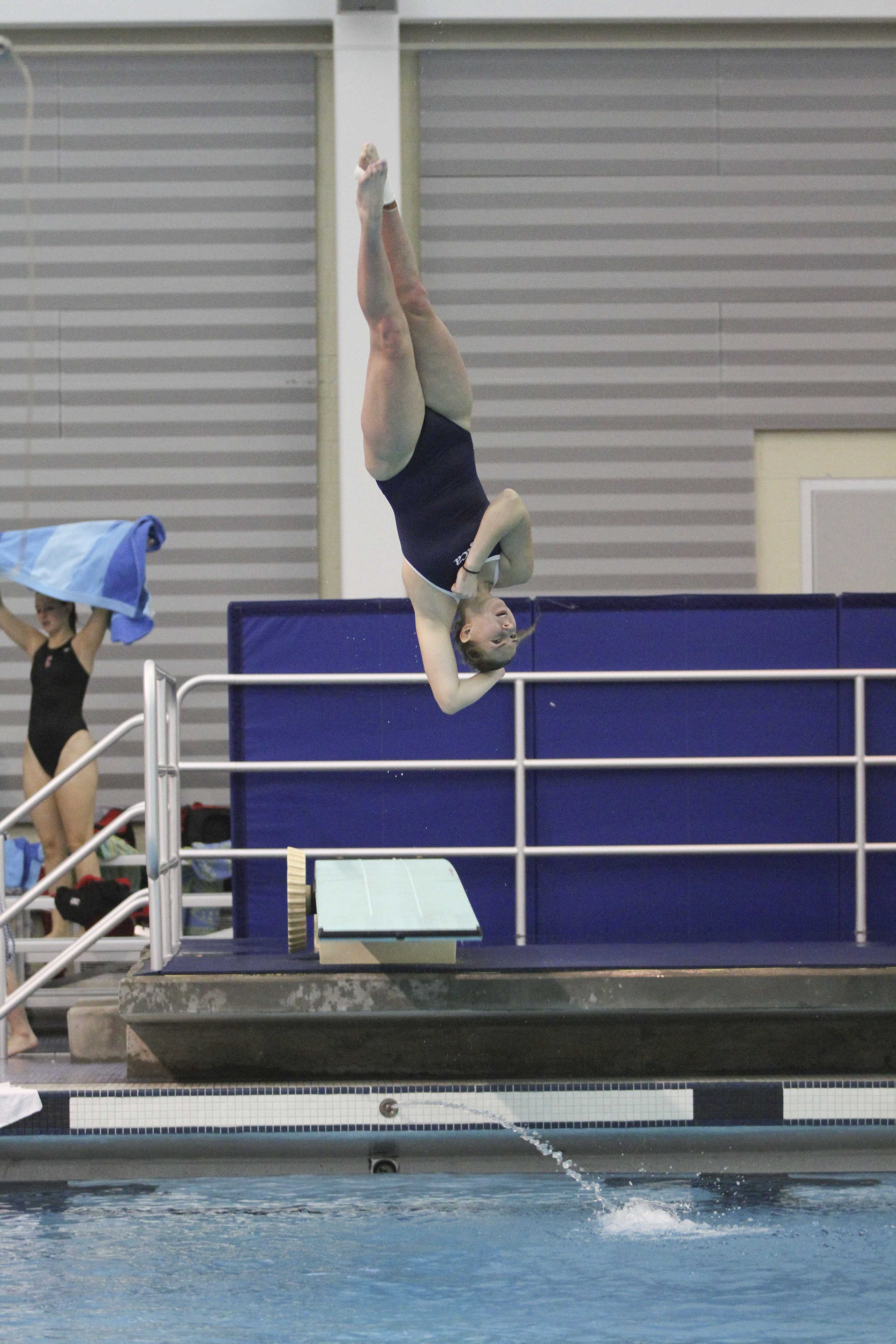 The men captured 17 top-10 finishes, including individual races and relays. Junior Matt Morrison capped a successful meet for the South Hill squad with a second place finish in the 3-meter dive. In the final event of the meet, tahe Bombers finished second in the 4×100-yard freestyle relay, finishing with a time of 3:08.35.

Following a three-team sweep in its last competition, the women’s squad accumulated 15 top-10 finishes. Freshman Grace Ayer, the reigning Empire 8 Swimmer of the Week, continued her early-season success, as she competed in seven different swimming events throughout the weekend. She finished fifth overall in the 200-meter individual medley.

Senior Heather Markus topped off the Bombers’ success during the weekend with two top-five finishes in the 1- and 3-meter dive.

Both squads will have time off before returning to action Jan. 11. The men will travel to Rensselaer Polytechnic Institute for the RPI Invitational, and the women will travel to SUNY Fredonia to take on the Blue Devils.

The women’s track and field team opened the season at the Greg Page Relays and left Barton Hall at Cornell University with two ECAC qualifiers on the track and four in field events.

In the 60-meter dash, junior Harmony Graves and sophomore Sarah Werner led the Bombers, placing 13th with a time of 8.07 seconds and 14th with 8.08 seconds, respectively. Junior Emilia Scheemaker met two ECAC qualifiers. She placed fifth in the triple jump with a leap of 11.71 meters and sixth in the long jump with 5.31 meters.

Freshman Natalie Meyer made her debut, placing seventh in the high jump with a 1.65-meter leap. At the end of the day, the Blue and Gold recorded 16 top 10 individual finishers.

The Blue and Gold will compete again Jan. 10 at Cornell University for the Southern Tier Collegiate Open.

The No. 16 ranked women’s basketball team defeated the visiting St. Lawrence University Saints 77–66 on Dec. 7 in Ben Light Gymnasium. The Bombers fell behind early but rallied in the second half.

The 5–1 Bombers improved their home record to 3–0 this season, as junior guard Ally Mnich led the squad in scoring with 15 points. Mnich had an efficient outing, shooting 4–6 from the field, while adding two assists, one rebound and one steal. The Blue and Gold had a balanced offensive attack, as four different players scored double-digit points. The bench also provided substantial production, adding 33 points combined.

The men’s basketball team is beginning to dig itself out of an early-season hole, as it captured a 64–56 win against the St. Lawrence University Saints. This victory also marked the first time the Blue and Gold won at the newly renovated Ben Light Gymnasium, and the team is now 3–4 this season overall.

In this back and forth contest, the Bombers led the Saints with about five minutes to play, but the Bombers hit nine out of the next 10 free throws to pull away for the victory. Senior forward Frank Mitchell led the way for the Blue and Gold with 18 of the team’s 64 points. Sophomore guard Joey Ross was perfect from behind the 3-point line sinking all three attempts from behind the arc.

The Bombers will enjoy a long hiatus before returning to action Jan. 3 at Hartwick College to begin Empire 8 conference competition.

The men’s track and field team officially began its 2013–14 season Dec. 7 at Cornell University for the Greg Page Cornell Relays.

Junior Rashaad Barrett not only hit the ECAC standard for the 60-meter dash that stood for three years, he also established a new record for the college, running a 6.95 seconds. The previous record belonged to Max Orenstein ’11 who ran it in 7.04 seconds in 2010.

Sophomore Stephen Gomez continued the Blue and Gold’s success on the track, as he placed 10th overall in the 3000-meter run with a time of 9.00.06. The South Hill squad had two other top-10 finishers: sophomore Ndue Palushi placed eighth overall in heptathlon tallying 3,785 points and senior Brendan Wilkins placed 10th in the high jump with an ECAC-qualifying 1.94-meter leap.

The Bombers will return to action Jan. 18 for the Ramapo College Indoor Select meet at the Armory in New York City.

The wrestling team placed second with a score of 117.5 points at the New Standard Invitational hosted by York College on Dec. 7. The Bombers finished two points behind meet champion Johnson and Wales University.

Freshman Carlos Toribio improved his overall record to 11–2 and was named Most Outstanding Wrestler for the tournament. Toribio finished with a 4–0 record for the day in the 174-pound weight class, one of the two Bomber wrestlers to place first in their weight classes. Junior Kris Schimek also placed first in the 165-pound weight class. He won all three matches, and improved to 10–2 overall.

The Blue and Gold advanced five wrestlers to the championship semifinals and had nine place in their respective weight classes.

The South Hill squad will wrap up the 2013 part of their schedule when they face the SUNY Oswego Lakers at 4 p.m. Dec. 14 in Ben Light Gymnasium.