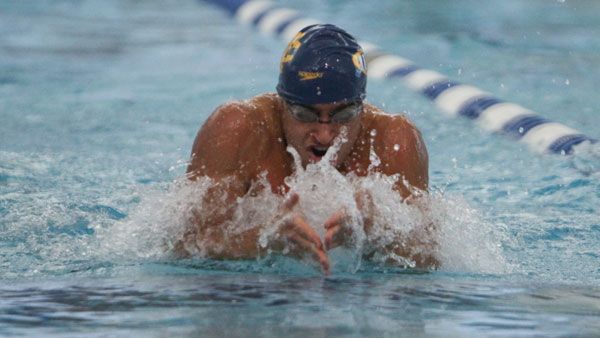 The No. 12–ranked wrestling team enjoyed its home mats Jan. 31 and Feb. 1 as the Bombers matched up against Nassau Community College and No. 18 Delaware Valley College at the Ben Light Gymnasium.

The Blue and Gold finished with a 33–9 win against Nassau Community College, but for the third time this season were edged out by tie break criteria, this time at the hands of Delaware Valley 19–18.

Against Nassau, the squad claimed victory in eight of its 10 bouts. Junior Alex Gomez won by major decision at 133 pounds, and freshman Nick Wahba by decision at 141 pounds.

The Rams claimed victory in the final three bouts to tie the match. Liam Korbul earned a takedown with one minute remaining but was not given points for a fall.

The Bombers return to competition at noon Feb. 8 at the SUNY Oneonta Duals.

Senior Rani Jacobson, sophomore Lara Haberle and freshman Alexis Mena scored the highest points in their respective events for the team this week.

The team will compete again at 1 p.m. Feb. 8 at the Cornell University Invitational.

The men’s and women’s track and field teams both won the Empire 8 Championships on Feb. 1 in Glazer Arena. The women scored 168.5 points, and the men scored 146 points.

For the men, junior Rashaad Barrett placed first in the 60-meter yard dash with a time of 7.04 seconds, which broke the meet record of 7.08 seconds. Sophomore De’Marques Graves also qualified for ECACs in the triple jump with a distance of 13.98 meters.

The men’s team will compete at 5:30 p.m. Feb. 7 in the Glazer Arena. The women will head to the Boston University Valentine Invitational on Feb. 7–8.

The No. 25–ranked men’s swimming and diving team won its dual meet against Union College on Feb. 1, overpowering the Dutchmen by a score of 194–106 at the Athletics and Events Center Pavilion.

The men opened with a win in the 200-yard medley relay. The team of seniors Connor White, Taylor Van Cott and Zack Kundel and junior Lucas Zelehowsky clocked in with a time of 1:34:04.

Junior Matt Morrison, the reigning Empire 8 Athlete of the Week, continued his dominance on the diving board. He swept both diving events, taking first in the 3-meter dive with a score of 371.25 and first in the 1-meter dive, scoring 369.45 points.

The women’s swimming and diving team also won against Union, with a 193–105 win over the Dutchwomen. The Blue and Gold took first place in a total of 11 of 16 events.

The Bombers earned first place in the 400-yard medley relay to begin the meet. The team of junior Kylie Bangs, sophomore Meredith Wells and freshmen Grace Ayer and Lake Duffy took the top spot with a time of 4:06.05.

After securing her first Empire 8 Athlete of the Week honors for the second consecutive week, freshman Nickie Griesemer helped the Bombers sweep the diving events for with a first place score of 303.80 in the 3-meter dive and 311.40 in the 1-meter dive.

Both squads will host the Ithaca Invitational at 1 p.m. Feb. 15 at the A&E Center Pavilion.

The men’s basketball team picked up its third road victory of the season Feb. 4 after defeating the Houghton College Highlanders 97–82 in Houghton, N.Y. The Bombers are now 6–14 on the season. The 97 points were the highest scoring total for the Bombers thus far this season.

The Bombers had four players who notched double-digit points. Freshman Joe Masino led the way for the Bombers, scoring a career-high with 29 on the night. Masino was also efficient from the 3-point line, as he hit six out of his seven attempts. Junior center Keefe Gitto also had a career-high on the night, with 25 points.

For the Highlanders, sophomore guard Brandon Camacho led the way with 21 points along with two assists on the night.

The Blue and Gold have five games remaining in the regular season, with all five games against Empire 8 opponents.

The South Hill squad was able pull away from the Highlanders at the beginning of the second half, going on a 21–2 run to lead by 20 with 8:18 remaining.

For the Highlanders, senior guard Kristen Moose and junior guard Stephany Ellison provided most of the scoring for the team, with 21 and 12 points respectively.

The Blue and Gold are now 16–4 on the season, including 8–1 in conference play. With five conference games remaining and Hartwick College with a 9–1 record in the conference, every game will be crucial down the stretch.

The Bombers will begin a four-game homestand at 8 p.m. Feb. 7 versus Nazareth College at Ben Light Gymnasium.