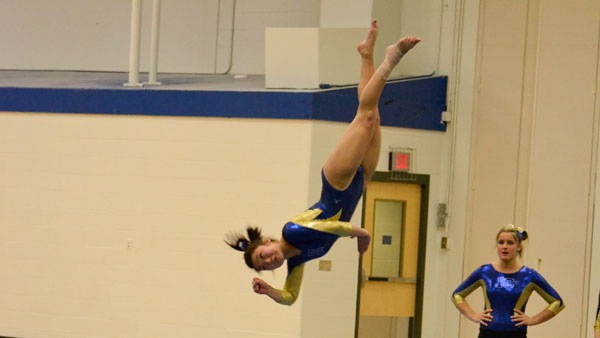 The women’s basketball team won the Empire 8 Championship for the third straight year after victories against St. John Fisher College and Stevens Institute of Technology on Feb. 28 and March 1, respectively.

Against Fisher, the Blue and Gold trailed early but snuck out a 73–69 win. Despite their win, the Bombers struggled to match up with junior guard Portia Velasco, who scored 27 points for the Cardinals.

After Stevens upset Hartwick College, the No. 2–ranked team in the conference, the Bombers squared off against the Ducks for the Empire 8 Championship, and the Blue and Gold won by a score of 63–51.

The Blue and Gold play The Sage Colleges in the first round of the NCAA Tournament at 8 p.m. March 8 in Ben Light Gymnasium.

The wrestling team finished second at the Northeast Regionals at Wesleyan University from March 1–2. The Bombers finished second out of 18 teams, as six Bomber wrestlers qualified for the NCAA Division III Championships.

The Blue and Gold had two weight class champions, three second-place finishers and a third-place finish to round out their six qualifiers.

At 133 pounds, junior Alex Gomez won his semifinal match by major decision and then proceeded to win his championship match by a 7–5 decision against Rhode Island College junior Silas Murray.

Junior Kris Schimek, the 165-pound champion, improved his overall record to 32–2 with four wins at the tournament. Schimek won by a 3–0 decision in the semifinals and won his championship match with a 15–0 technical fall win against senior Collin Crowell of Roger Williams University.

Freshmen Jimmy Kaishian and Carlos Toribio, senior Dominick Giacolone and junior Kevin Collins will join Gomez and Schimek and compete in the NCAA Championships on March 13 and 14 in Cedar Rapids, Iowa.

The gymnastics team finished the regular season with a home meet March 1 in Ben Light Gymnasium. The Bombers lost to SUNY Cortland by a score of 187.00–182.050, but reached their goal of scoring 180 points.

The team began the meet with the vault, as senior Rani Jacobson led the team scoring 9.500 points and placing fourth overall. Sophomore Megan Harrington, the Bombers’ only all-around competitor, placed eighth on the vault scoring 9.375 points. Harrington finished second for the team as an all-around.

Junior Dennis Ryan, sophomores Zane Scott and Larkin Bohanan and freshman Sean Phillips won the distance medley relay with a time of 10:22.82. Juniors Rashaad Barrett and Kevin Davis and sophomores Jeff Hejna and Aaron Matthias placed second in the 4×200-meter relay, clocking in a time
of 1:31.85.

The women’s track and field team placed second at the Indoor Championships, snapping a five-year streak of meet champions.

Freshman Natalie Meyer won the pentathlon with a 2,955-point performance and placed second in the high jump. She was awarded NYSCTC Rookie of the Meet.

Both teams will compete from March 7–8 at the Eastern Collegiate Athletic Conference Indoor Championships in Boston.

Senior Griffin Reid lost his first set 6–3 but came back to win his next two sets 6–1 and 6–4, securing a victory in his first appearance this season. Senior David Andersen also won, taking the first set 6–4 and the second 7–5. Freshman Wes Davis lost his first set 6–2, but won the match by winning both his second and third sets 6–4.

The men’s lacrosse team lost a 15–11 contest to No. 1–ranked Rochester Institute of Technology on March 1 in Rochester, N.Y. The teams were tied 6–6 at halftime, but the Tigers’ second-half surge was too much for the Bombers to overcome.

Both squads scored early and often in the first period, as the score was 5–5 at the end of the first quarter. However, each team only allowed one goal in the second quarter.

Senior Pat Slawta matched his career high with six goals and scored the first goal of the game. RIT answered his goal with two more to put them ahead. Senior Jake Long scored two minutes later to even the score, and sophomore Michael Walker put the Bombers ahead with a goal. The Tigers added two more goals, but Slawta added two of his own.

The Tigers dominated the third quarter, as they outscored the Bombers 5–1. After four consecutive goals, RIT began the fourth period leading 11–7, which was enough of a lead for the Tigers to win.

The Blue and Gold play at 1 p.m. March 8 against Ursinus College in Collegeville, Pa.

Morrison scored 455 points in the men’s 3-meter dive, earning him third place out of 15 competitors. In the 1-meter dive, Morrison finished second with a score of 479.45 points.

Griesemer led the Bombers with a score of 411.30 to earn second place out of 24 contestants. Markus finished fourth with 384.65 points. Griesemer took second place in the women’s 3-meter, accumulating 435.00 points.

The Blue and Gold will wrap up their season at the NCAA Championships from March 19–22, which will take place in Indianapolis.