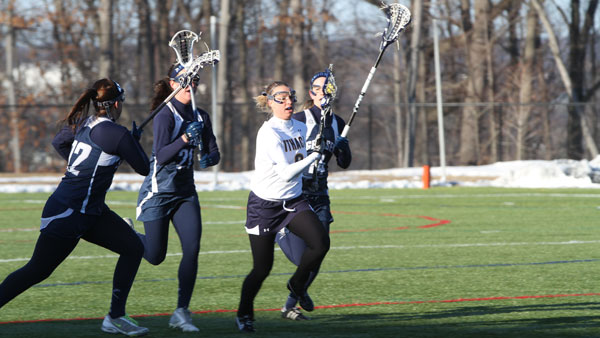 The men’s tennis team finished with a 2–1 record during its spring trip from March 9–14 in Hilton Head Island, S.C.

The South Hill squad began the trip with a 5–4 victory against Millsaps College on March 9. The Bombers held a 2–1 advantage after doubles play and split the singles matches to earn the team victory.

After earning its first win of the season, the squad swept the doubles matches and won five of six singles matches for a 8–1 victory against Penn State-Harrisburg on March 13.

The Blue and Gold’s next match will begin at 4 p.m. March 25 in a dual match at Hobart College before playing against Empire 8
conference opponents.

The baseball team began its season with a doubleheader sweep of SUNY Old Westbury on March 7 before leaving for its spring trip to California. However, when the Bombers arrived on the West Coast, they dropped their first three games.

But strong pitching from junior John Prendergast and senior David Jasukonis and timely hits from infielder Colby Gee lifted the Blue and Gold to win their next two games against Claremont-Mudd-Scripps College and Occidental College. Prendergast and Jasukonis finished the trip with two wins each and ERAs of a 0.64 and 1.28, respectively. Gee currently leads the Blue and Gold with a .538 batting average, 14 hits and 12 RBIs.

The team finished its trip with an 8–4 loss to No. 12–ranked California Lutheran University. Sophomore left hander Benji Parkes struggled during the trip, giving up seven runs and eight hits against the Kingsmen and losing both games Parkes started.

The Bombers will return to action and face the Kean University Cougars on March 22 in Union, N.J.

The women’s track and field team finished seventh out of 62 teams at the ECAC Indoor Championships in Boston.

Three juniors had highlight performances. Hannah Wright placed second in the 1,000-meter run with a time of 3:02.56, Leigh Martino placed fifth in the 500-meter race finishing in 1:19.26 and Harmony Graves placed seventh in the 200-meter dash crossing the line in 25.77 seconds.

Junior Emilia Scheemaker and freshman Natalie Meyer represented the Blue and Gold at the NCAA Indoor Championship in Lincoln, Neb., from March 14–15. Scheemaker placed fifth in the triple jump, earning all-American accolades, and Meyer placed 14th in the high jump.

The men’s and women’s squads will open the spring season March 29 with the Ithaca Invitational at Butterfield Stadium.

The women’s lacrosse team dropped three of its four contests played from March 6–13.

The Bombers began the 2014 season March 6 at Higgins Stadium with a 10–7 loss to the No. 10–ranked SUNY Geneseo Knights. Sophomore attacker Ally Runyon scored a hat trick for the Bombers, and senior attacker Becky Guzzo tallied one score and an assist.

The Bombers played at No. 9–ranked York College on March 8, but despite being tied 5–5 at halftime, they lost 14–12. Runyon scored four goals, and junior midfielder Delaney Gilson scored twice.

By scoring 12 second-half goals, the Bombers got its first win March 11, as they defeated Connecticut College 15–5. Runyon, sophomore midfielder Riley Marion and junior midfielder Molly Fischer all had hat tricks.

The Bombers lost to the No. 6–ranked Gettysburg College Bullets on March 13 by a score of 13–12. The Blue and Gold held the lead at the half, but Gettysburg tied the game in the second half. After the first overtime, Bullets midfielder Maggie Connolly scored the game-winning goal in sudden death.

The gymnastics team finished with its second-best team score at the Eastern College Athletic Conference Gymnastics Championships on March 8 at Springfield College.

Sophomore Megan Harrington placed seventh as the Blue and Gold’s only all-around competitor with a score of 36.075. Senior Shilanna Gallo finished 10th in the uneven bars with a score of 9.250.

Senior Rani Jacobson led the squad on the vault with a score of 9.425, placing 13th overall, while freshman Ingrid Calfee had a score of 9.300, placing 18th. Harrington rounded out the top 20, scoring 9.275.

The Bombers will host the National Collegiate Gymnastics Championships at 4 p.m. March 21–22 in Ben Light Gymnasium.

The Bombers defeated Lycoming College on March 5 by a score of 15–3. Eight different Bombers scored a goal, but senior midfielder Jake Long tied his career record with five goals.

The Blue and Gold rallied from a two-goal halftime deficit against Ursinus College on March 8, defeating the Bears 6–5. The Bombers scored three goals in the third quarter, and with 2:19 remaining in regulation, senior midfielder Ryan Burns scored the game-winning goal.

The Bombers will play Elmira College at noon March 22 in Elmira, N.Y.

The softball team opened the regular season with 10 games from March 9–14 in Clermont, Fla. The Bombers began with eight consecutive wins but dropped the final two contests.

First, the Bombers played Juniata College and Manhattanville College. Against Juniata, senior pitcher Sam Bender led the team to a 5–1 win. Junior infielder Francesca Busa went 3–for–4 scoring two runs, and senior Sydney Folk went 2–for–3 at the plate. Freshman outfielder Jessie Fleck also added a hit and scored a run. Sophomore pitcher Allison Macari led the Bombers past Manhattanville with a 6–3 win, while five Bombers each recorded at least one hit.

Bender led the team again March 10 with a 7–2 win against Transylvania College, allowing just four hits and two earned runs. Busa went 2–for–4 at the plate and Fleck went 2–for–3, scoring a run and tallying an RBI. Sophomore Laura Quicker pitched a complete game shutout against Rhode Island College, as the Bombers completed the doubleheader with an 8–0 win against the Anchorwomen.

The Bombers won their next four games, facing The College of New Jersey and Penn State-Behrend on March 11 and Alvernia University and Richard Stockton College on March 13. The Blue and Gold lost their early 3–1 lead to TCNJ, but junior Monica Capolongo’s sacrifice fly gave her squad the win in the eighth inning. Against the Nittany Lions, sophomore Catcher Kelly Robichaud went 4–for–4 at the plate, and the Bombers won 9–2.

The Blue and Gold lost their final two games in Florida to Wittenberg University and Millikin University on March 14. Wittenberg defeated the Bombers 7–2, as Bender gave up three runs and struck out three. Quicker also pitched, giving up five hits and a strikeout. In the second game, Millikin defeated the Bombers 7–3. Macari pitched this game, giving up five runs and striking out four.

The team will return to action with a doubleheader against Rensselaer Polytechnic Institute beginning at 1 p.m. March 22 on Kostrinsky Field.