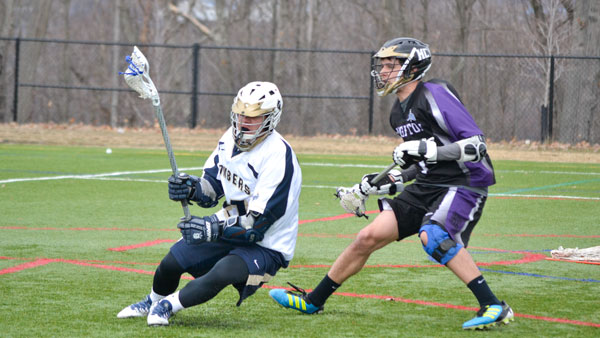 The baseball team posted a 5–1 record in its six games from April 2–6, including three conference wins to improve to 14–5 this season.

The Bombers collected 9–4 and 7–5 wins against SUNY Oneonta in a doubleheader April 2 at Cornell University’s Hoy Field. Trailing by one run in game two, senior first baseman Colby Gee hit a two-run home run to cap a comeback in the bottom of the seventh inning. Freshman Logan Barer made his first collegiate start, allowing two runs in 5 2/3 innings while striking out three and walking one.

The Blue and Gold won three of four games against Stevens Institute of Technology from April 5–6. Sophomore left fielder John Stanley hit a go-ahead solo home run in the 12th inning in the first game of the series to give his team a 5–4 victory. Stevens scored just one run in the next two games, as the Bombers picked up 5–1 and 5–0 victories. The Ducks, however, rallied in the final game to beat the Blue and Gold 5–1.

The Bombers got their fourth straight Empire 8 conference victory with an 8–1 win April 8 at Nazareth College.

Sophomore Chris Hayes won his singles match 6–0, 6–0 and won his doubles match with Reid 8–3. Sophomore Zach Passman rallied in the top singles match after losing the first set 7–5. He won the remaining sets 6–4, 10–3 to capture the individual victory.

The South Hill squad will face the College of New Jersey at 11 a.m. April 13 in Ewing, N.J., trying to keep its winning streak alive.

The Blue and Gold dominated on offense in the first quarter, scoring three goals and holding the Red Dragons to one. The Bombers led at halftime 4–1. In the third quarter, the Red Dragons answered with four unanswered goals. Junior midfielder Mike Cantelli, junior attack Benjamin Dunleavy, sophomore attack Zach Hopps and Rakoczy each scored to put Cortland ahead 5–4.

Both squads exchanged goals in the fourth quarter, but with one minute to play, the Bombers trailed by one goal. With 14 seconds left in regulation, freshman attack John Januszkiewicz scored to tie the game.

The Bombers returned to Higgins Stadium to play Houghton College on April 5 and bounced back from their previous game, shutting out the visiting Highlanders, 19–0.

The Bombers face off with Empire 8 conference–leading Nazareth College at 4 p.m. April 12 at Higgins Stadium.

The men’s crew team received first-place honors with its top two varsity boats, defeating both University of Rochester and Rochester Institute of Technology in its opening dual meet April 5 on Cayuga Inlet. The Bombers’ top boat crossed the finish line in 6:07.3., and their second boat finished in 6:27.8.

The Bombers took first-place in three of the four races against SUNY Geneseo and St. John Fisher College on April 6. The Blue and Gold took first-place again with a finishing time of 7:13.8, the men’s novice finished in 8:10.2.

The women’s crew team took first-place in all four races defeating Rochester and RIT on April 5. The top fleet recorded a time of 7:12.1., while the second boat finished in 7:22.9.

The Bombers also defeated both Geneseo and Fisher on April 6, as the women’s top boat posted a time of 7:34.1.

Both squads will face Skidmore College and St. Lawrence University at 11 a.m. April 12 on Cayuga Inlet.

The No. 15–ranked women’s lacrosse team upended Houghton College by a score of 19–4 April 5 at Higgins Stadium.

The South Hill squad continued its winning ways April 8, defeating the William Smith College Herons by a score of 9–6.

The teams were tied 2–2 midway through the first half, but the Bombers scored three unanswered goals in 43 seconds and never looked back. The Herons cut the Bombers’ lead to one with 20:35 left to play, but the Blue and Gold’s defense only allowed one more goal.

Marion and Fischer each recorded a hat trick. Sophomore attack Ally Runyon chipped in two goals and one assist. Freshman goalkeeper Emily Ross collected 12 saves in the game to earn her sixth win of the season.

The Blue and Gold return to Empire 8 conference action at 1 p.m. April 12 against Nazareth College in Rochester, N.Y.

The men’s track and field team competed April 5 at the Muhlenberg Invitational in Allentown, Pa., in the first outdoor event of the year. The Blue and Gold had two individual event winners and clinched four Eastern Collegiate Athletic Conference qualifiers.

The women’s track and field team also opened competition April 5 at the Ramapo College Invitational in Mahwah, N.J. The Bombers won the meet with 200 points and also hit 10 ECAC qualifiers. Junior Meghan Cass won the 10,000-meter run with a time of 39:57.94 meeting the ECAC standard. Freshman Natalie Meyer placed first in the high jump, clearing 1.63 meters and qualifying for the ECAC Championships.

The rest of the men’s and women’s squads opened their seasons April 6 at the University of Rochester Alumni Invitational in Rochester, N.Y. The men’s team placed 22nd out of 25 teams scoring four points. Freshman Dan Drill and senior Steve Episcopo earned three and one points in the pole vault, respectively.

Both teams compete again April 12 at the Moravian College Invitational in Bethlehem, Pa.

The softball team opened its home schedule with a doubleheader against SUNY Cortland on April 2. The Red Dragons swept the series as the Bombers lost both games by scores of 3–0 and 4–2.

Senior pitcher Sam Bender started game one of the doubleheader for the Blue and Gold, but Cortland quickly got on the board after Bender gave up a leadoff home run to sophomore outfielder Diane Cork. Bender surrendered a two-run home run to sophomore third baseman Carrie Stoddard in the sixth inning.

After getting only five hits through 14 innings, the Bombers’ offense exploded in two 8–0 wins against Nazareth College on April 6.

Fleck led all Bombers with three RBIs, as she cleared the bases with a double in the sixth inning. Sophomore first baseman Casey Gavin went 2–3 and scored twice. Bender bounced back after her start against Cortland, as she pitched six shutout innings and struck out five. The squad collected 6–0 and 9–1 wins at home against Houghton College on April 8.

Bender struck out six and allowed only three hits. Fleck had two hits and an RBI in both games, and Gavin went 3-for-3 with an RBI as well. Macari got the win in game two, as she gave up three hits but had seven strikeouts.

The Bombers will play Elmira College at 3 p.m. April 11 in Elmira, N.Y.