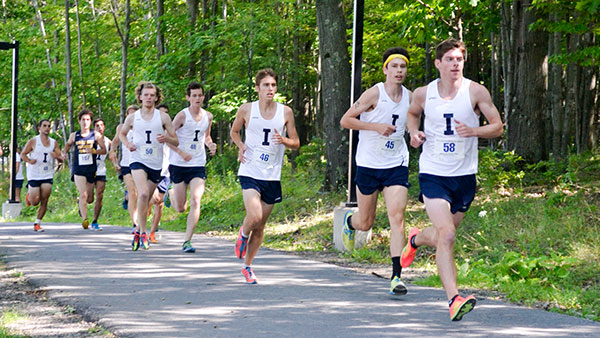 In its opening game of the season, the men’s soccer team lost 4–0 to SUNY Oneonta on Aug. 30 in Oneonta, New York. It was a difficult beginning of the season for the Bombers, who were dominated by the Red Dragons throughout the game. Oneonta scored two goals in the first half, while the Blue and Gold did not record a shot in the opening 45 minutes.

Senior back Liam Joy and sophomore forward Sam Boylan recorded the only two shots for the Bombers in the second half. However, it was not enough to avoid the loss, with Oneonta pushing the score to 4–0 by the 66th minute. Senior goalkeeper Jordan Gentile made four saves on eight shots.

Overall, the Red Dragons outshot the Bombers 17–2. Junior goalkeeper Nate Robinson played the last 17 minutes of the game, making his first appearance with the Bombers, while earning one save. Sophomore midfielder Aziz Farouk said the work the team put in during practice did not translate to the field against Oneonta.

“We couldn’t dominate the game,” he said. “I don’t know if we were nervous because we didn’t apply what we practiced in the game.”

The Blue and Gold will play their next game at 2 p.m. on Sept. 6 in the first game of the Elizabethtown Tournament against the hosting Elizabethtown Blue Jays in Elizabethtown, Pennsylvania. They face Dickinson College the following day.

The No. 5–ranked women’s soccer team made a statement in its first weekend of play, recording 1–0 wins over Kean University on Aug. 29 and Stockton College on Aug. 30 and winning the Kean Cougar Classic.

Junior midfielder Kelsey King recorded both of the Bombers’ goals, scoring in the 34th minute against Kean and in the 61st minute against Stockton. Junior goalkeeper Beth Coppolecchia improved her record to a perfect 2­–0 after saving a combined seven shots over the weekend.

The Blue and Gold’s young defensive line held strong, particularly in the second game, when they held the Osprey offense to just two shots — both in the second half.

“I think [our defensive performance] showed how hard we worked during preseason,” Coppolecchia said. “We focused a lot on defense, and it definitely showed in our first two games.”

On the offensive end, the Bombers outshot opponents 29–15 and sophomore forward Holly Niemiec recorded the team’s only assist on a cross to King in the second game.

Coppolecchia said the wins boosted the team’s confidence as it heads into its Sept. 7 home opener against Farmingdale State College at Carp Wood Field.

“It shows that although we lost 10 seniors last year, we’re still a team to watch for,” she said. “It also helps us a lot later on in the season when we start to think about our regional rankings.”

In its season opener, the field hockey team took a tough 2–0 loss against Washington College on Aug. 30 at Lower Bermuda Field in Chestertown, Maryland. After a scoreless first frame, the tight contest came down to the final 10 minutes of play, when Washington was able to break open the game by netting a pair of goals for the victory.

Despite allowing the two goals, sophomore goalkeeper Katie Lass showcased why she was named Empire 8 Rookie of the Year last fall. While Washington dominated offensively, Lass was commanding in the cage as she had 24 saves, just four shy of her career-high 28 that came last year against Stevens Institute of Technology.

Going forward, Lass said even though  defense has been the focus this year, the Bombers will focus on more offensive strategy and getting the ball up the field so they can get on the board.

“Now we are going to start ramping it up and doing some more things offensively, so I’m hoping that will trigger a spark and we can get some goals,” she said.

The South Hill squad will look to bounce back in its next game, as it will face off against the Yellowjackets at the University of Rochester at 1 p.m. on Sept. 7 in Rochester, New York.

The women’s volleyball team began its season at the Brockport Invitational from Aug. 29–30 by winning all three of its matches, returning home with a 3–0 record. This is the first time since 2007 that the Bombers began the season unbeaten in their opening three matches.

The South Hill squad continued to play well on Aug. 30, taking its first game of the day against the host team, SUNY Brockport, dropping one set in a 3–1 win.

The Blue and Gold concluded their weekend by beating Skidmore College 3–1. Senior captain Rylie Bean and junior captain Dylan Gawinski-Stern guided the Bombers in the win against the Thoroughbreds. Additionally, Bean led the team with 16 kills and one block, while Gawinski-Stern added nine kills of her own.

With such a young team, head coach Janet Donovan said she was pleased with the veteran leadership to begin the year, highlighting Bean’s weekend play.

“This was a fantastic start to our season,” Donovan said. “We are a very young team, with the majority of our starters coming from the freshman and sophomore classes. Our lone senior, Rylie Bean, came through for us all weekend long with solid hitting and play. It really was a solid team effort.”

Looking to maintain their good form, the Blue and Gold will return home to host the Bomber Invitational from Sept. 5–6 at Ben Light Gymnasium. The squad will begin its first of four matches at 3:30 p.m. on Sept. 5 against Cazenovia College.

The women’s tennis team began its 2014 campaign with two 9–0 shutout victories Aug. 30 with a win on the road against SUNY Cortland before returning home to the Wheeler Tennis Courts to defeat Alfred University.

In the first half of the doubleheader, the Bombers swept the doubles matches in pro sets before taking five of six matches in straight sets. Seniors Alyssa Steinweis and Allison Vizgaitis only lost one game in each of their singles competitions.

Sophomore Haley Kusak, the Blue and Gold’s No. 1 starter in singles, showed poise in the top spot, as she defeated Cortland’s Mary Claire Kopcienski 6–1, 6–0 and shut out Alfred’s No. 1 Brennan Ferguson 6–0, 6–0.

The Bombers breezed by the Saxons, taking all three doubles matches and winning all six singles matches in straight sets.

Steinweis said the doubleheader felt more like a tournament, given the amount of tennis the team played in one day.

“When your legs get tired, you kind of start playing mental games with yourself, especially with serving that many times because it really takes a toll on your arms and back,” Steinweiss said. “It’s tough but doable.”

The Bombers’ closest matchup was in No. 6 singles against Cortland, when senior Kelly Fishback dropped the first set 4–6 before returning with a 6–3 win and a 10–3 victory in the super tiebreaker to secure the shutout.

The Blue and Gold will return to the courts at the Mary Hosking Invitational from Sept. 6–7 at William Smith College in Geneva, New York.

The men’s and women’s cross-country teams began their seasons on Aug. 30 with the 2014 Jannette Bonrouhi-Zakaim Memorial Alumni Run, in which current runners competed against returning Ithaca College alumni.

The meet marked the only time this season that the Bombers will run on their home turf.

The women finished with a team score of 20, while the alumni boasted an impressive score of 42. Junior Sawyer Hitchcock finished in second for the men’s team in the 5k race with a time of 16:07:70.

In total, the men’s team completed the race with five top–10 finishers and a team score of 32. Hitchcock said he was pleased with the opening meet result.

“We were very happy with the results; our summer training definitely showed at the meet,” Hitchcock said. “It was a good way to start off, and now we have something to build off of.”