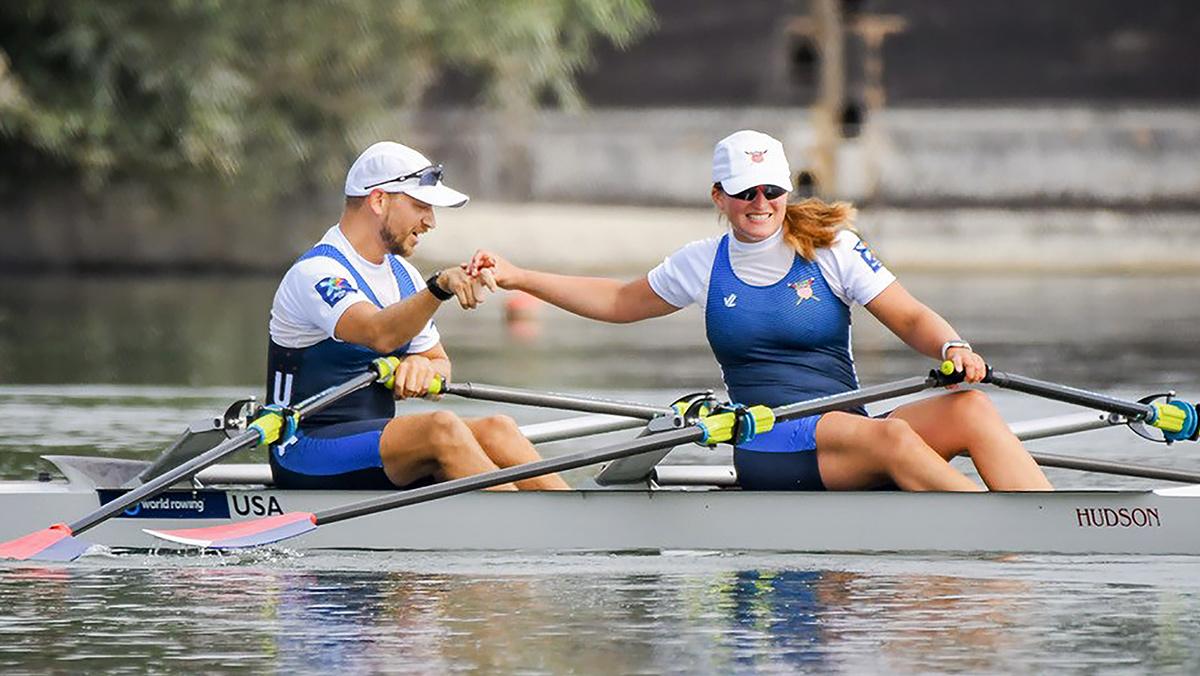 While her peers on the Ithaca College rowing team were returning to campus to begin training for the season, senior rower Pearl Outlaw was in Linz, Austria, competing at the World Rowing Championships, which were held Aug. 25–Sept. 1.

Outlaw said the experience of earning a medal for her country on the international stage carries a sense of pride that she hopes never leaves her.

Outlaw entered the championship as a veteran, having competed in 2018 as well. However, instead of competing for the Bombers’ rowing team in the spring, Outlaw spent the entire spring and summer preparing for her event with the Para National team.

Outlaw has a genetic condition called retinitis pigmentosa, which affects the retina and causes severe vision loss. She said that she left the college during the spring semester after her vision drastically decreased, and she decided to go to the Carroll Center for the Blind in Boston. Outlaw said she took classes at the center to help her learn life skills that will help her live with her condition. Boston is also the home of the USRowing Para Training Center, and she trained when she was not in class.

With the increased training time that took place while she was in Boston for the spring and summer, Outlaw said she was able to put in more hours working with her partner, Joshua Boissoneau. The pair competed together in the mixed double sculling event, and she said this time allowed them to improve their performance as a unit.

“We were a lot more mentally prepared,” Outlaw said. “We were able to row so much better and had gotten stronger. We had time to devote to our boat and that made all the difference.”

Women’s rowing coach Becky Robinson said she is looking forward to seeing Outlaw’s improvement when she returns to the water for the Bombers.

“She’s gradually improved, and while part of it has been from what we do here, a lot of it comes from the fact that she has trained over the last two summers with an elite group,” Robinson said. “They’re the ones who have come up with all of these opportunities and keep track of how she is doing. I’m really excited to see the change in her rowing abilities over the course of the year.”

Men’s rowing coach Dan Robinson said Frid’s participation for Team USA has inspired the men’s team as it prepares for its collegiate season. Even though no current members of the team participated with Frid, Robinson said it still feels like their teammate is out there competing.

“Guys are fired up,” Dan Robinson said. “Eric sent me a little deck of trading cards, and we passed out almost all of them. The guys really wanted them. Even if they are at the bottom of the team they can say, ‘I row on the same team as a USA guy.”’

Musnicki is the most accomplished of the three competitors. She is a two-time Olympic gold medalist for Team USA, and she recently came out of retirement in hopes of making the 2020 Olympic roster. While Frik has not competed in the Olympic Games yet in his career, he said he is hoping to change that in the last qualifying meet for the 2020 Games.

“Our goal at the world championships was to get top 11, as that would have qualified us for the Olympics,” Frid said. “We fell short of that goal, and there were a few races where we just missed out. Our next goal is to go to the next qualification event in Switzerland in May, and we need to get top two there to qualify for the Olympics.”

Becky Robinson said the performances of their athletes at the international level helps elevate the reputation of the program at the college.

“It’s really great for recruiting,” Becky Robinson said. “There is this misnomer in rowing — that Division I rowing is so much better than Division III rowing. Really good Division III teams are faster than some of the mediocre Division I teams, and it’s good to show our recruits who want to continue rowing after college — that they can do that and have a well-balanced collegiate experience.”