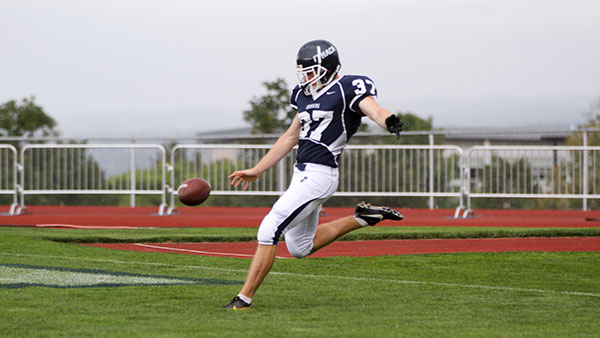 Jillian Flint/The Ithacan
Junior Brandon Steff punts the ball during warmups prior to the Blue and Gold's 21–16 win over the Dutchmen on Sept. 6 at Butterfield Stadium.
By Christian Araos — Senior Writer
Published: September 6, 2014

The opening game of a football season has a tendency to reveal both what has changed and what has not changed. The football team epitomized that truth in its 21–16 win against the Union College Dutchmen Sept. 6 at Butterfield Stadium.

Last season, seven of the Bombers’ 12 games were decided by eight points or less. The Blue and Gold’s tendency toward late game drama looks likely to continue this season, as the Dutchmen were nine yards away from stealing a win before junior defensive back Anthony Cugini broke a fourth-and-goal pass from Dutchmen senior quarterback Connor Eck. Cugini’s timely breakup saved the Bombers from a series of events that nearly saw them suffer their first opening game loss in more than 10 years. Head coach Mike Welch said the win was good for the defense’s mental strength.

“They’re a young defense that got put in a lot of tough situations,” Welch said. “To be able to come through with a win and to learn some lessons along the way is really going to pay dividends going forward.”

“Someone had to step up and make a play; it’s plain and simple,” Williams said. “We were running the same defense during the drive, and the corner and safety stepped up and made the play.”

The Dutchmen were trailing 21–10 midway through the fourth quarter when Thomas broke free for an 82-yard touchdown run. The Dutchmen’s subsequent two-point conversion attempt was intercepted by Bombers senior defensive lineman Joe Ricotta. The Blue and Gold’s next drive saw them reach the Dutchmen 10-yard line before senior quarterback Tom Dempsey was strip sacked on third down. Though they recovered the fumble, junior kicker Max Rottenecker missed a 46-yard field goal attempt, which presented the Dutchmen with a final chance to win the game.

Rottenecker’s miss was the third time in which the Bombers failed to put points on the board after entering the Dutchmen red zone. Senior kicker Garrett Nicholson missed a 20-yard field goal in the first quarter, and Dempsey threw an interception in the back of the end zone late in the first half, right after junior wide receiver Josh Oliver returned a punt 66 yards to the Dutchmen 8-yard line. Dempsey noted the offense’s missed opportunities but was pleased with the offense’s performance.

“We did a lot of good things,” Dempsey said. “We executed pretty well, but we left points on the board. We could have done a lot better. For week one, it’s good that we can do that and fix that and carry it through for the rest of the year.”

Dempsey threw for 222 yards and three touchdowns to lead the Bomber offense, which received a spark from freshman running back Tristan Brown, who rushed for 74 yards on 12 carries. Sophomore Andrew Tabbert, starting at wide receiver over unfit senior Joel Lynch, led all receivers with four catches and a touchdown.

The Blue and Gold have their bye next week before hosting the Hartwick College Hawks on Sept. 20 at Butterfield Stadium. The Hawks were the only Empire 8 team to defeat the Bombers last season.